Remembering a few places that I wish were still there.. 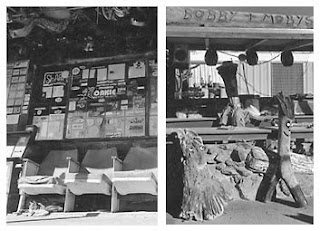 ...Sifting thru contact sheets made years ago, I came across a few that really jogged my memory, in a bittersweet way.
One was of film shot 10 years ago at 'Bonk's Jawbone Canyon Store' which was located on CA. Rte 14, heading north from the town of Mojave, Ca., about half-way to Red Rock Canyon state park.
Red Rock Canyon park is a great place to explore and shoot:


Bonk's (the image on the left, above) was definitely a ramshackle and improvised place, that catered to all travelers (postcards, maps, sunglasses, cold drinks, sandwiches, probably made hundreds of miles away, & shrink-wrapped a week before eating,)...
and also to dirt bike riders headed to Jaw Bone Canyon - gloves, gas, oil, tires, and probably a lot of things I don't remember, 'cause I don't ride bikes.
The place was filled, to the rafters, with stuff you never thought you'd need or like, until you landed in a place like that... including an ashtray, shaped like a coiled rattlesnake!
(I really wish I had bought one of those!)
In short, if Bonk's didn't have it?... you wouldn't need it, anyway.

The last time I drove past the place in 2001, it was closed...
with a big sign and a real estate agent's phone number.

The town of Mojave had changed a lot too - when I first passed thru, in '97, it was definitely a town with one main street, a few local businesses, and that was about it. No chain stores, or Burger King's - there was one excellent restaurant, excellent in an old fashioned homey way - I guess the town has always been home to some aviation pursuits, and this restaurant was as filled to the rafters with photos of planes as Bonk's was with motorcycle stuff.
I got a steak on a sizzling hot platter which I devoured immediately, after almost a week on the road, sleeping in a tent.

The restaurant has changed hands, and now the town has a partial beltway around it, which to me seemed really weird - a BIG beltway, around very little, still. As I remember, there was a KFC(?) and some 'progress'(if you could call it that)... enough that I was disappointed, and drove on.
I don't mean to diss the town, I guess sometimes progress doesn't have much character
sometimes.

Moby's place... (It's on the right, above) was somewhere along Rt. 247 between Barstow and Yucca Valley - the proprietor was a grizzled ol' desert-rat kinda guy, who said he lived there with his 8th wife.
Besides having a collection of BMW motorcycle parts that brought visitors from as far away as Germany, he erected some really bizarre and unique sculptures made from whatever detritus he could lay his hands on.
I've never seen anything like it, before or since.

You've probably guessed the (sad) end to this... which is that his creations are gone - last time I passed by(2003).
I'll bet the old guy died, and anyone who took it over had no interest in continuing his eccentric creations,
and leveled it all.
Bummer.
I'll miss it, glad I took a few frames while I had the opportunity.

Larger images of all the above mentioned places, are here: