A Departure?.. A Mysterious Cruise...?

But first, from the whatever catches my eye file:

The Shallows: What The Internet is Doing to Our Brains
A book by Nicholas Carr
"Carr grabs our lapels to insist that the so-called information society might be more accurately described as the interruption society. It pulverizes attention, the scarcest of all resources, and stuffs the mind with trivia."
I noted the initial article Mr. Carr wrote in The Atlantic magazine some two years ago, “Is Google Making Us Stupid?” in this blog. Glad to hear he has expanded on the topic, it's well worth our attention.
Check it out!

No, Seriously, Why is the Sky Blue?
http://news.discovery.com/earth/no-seriously-why-is-the-sky-blue.html 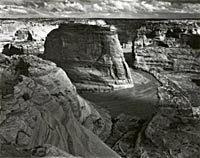 This photo provided by Sotheby's shows Ansel Adams' "Canyon de Chelle National Monument, Arizona, 1942." The image is among 1,000 Polaroid and gelatin silver prints by some of the biggest names in 20th-century photography being offered at Sotheby's on June 21-22 as part of a bankruptcy court-approved sale.The largest number of works were taken by Adams, about 400 Polaroid and non-Polaroid images.


Wouldn't it be nice to review this collection before it gets sold?? WOW!
http://www.anseladams.com/index.html
I've been close to where Ansel A. took the photo above,
and I've gotta tell ya: the trail down from the rim to White House ruins is totally treacherous. 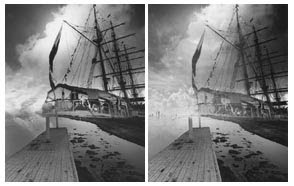 Not sure what to title this image. Is it a departure?... a mysterious cruise?
or just a long walk off a short pier?

This the second print of the day 4/17/10. Initially, it didn't work out so well, and made me aware that maybe doing a photoshop sketch that looked OK wasn't always a ticket to final darkroom print that worked well. It made me 'rest on my laurels' which is never a good idea.
C'est la vie! - sometimes it's good to get a 'check-up from the neck, up' by whatever means it is accomplished.
This image (above, at left) definitely went thru some development changes, way more than I usually go through, before I finally was happy with it.
The dock was shot somewhere along the Salton Sea, in So. Cal., the ship was shot in SF Bay, during a 'fleet week' thing...and the clouds ( behind the ship masts) come from Nevada, Xmas 2008 trip.

I thought it would come together much better than it did. Perhaps it was late in the day, and I was fading.
The ship is too clear and detailed, I wanted it to be 'fuzzier', in some way, and to 'sit' on the shoreline, so that the shoreline and ship became one.
And the sky I burned in, in the middle from the left edge was kind of a desperation move - a 'the day is ending, I am fading' thing.
It definitely deserved a second pass, or more work of some kind - I'm always up for a mysterious cruise(=trip) of some kind :-) aren't you?
Instead of immediately printing it again in the darkroom, I tried a different approach, for a change - what happens if I scan the print as is, and scan some additional negatives, and make a hybrid 'darkroom & digital' image?
I discovered a neg that added some interesting things to the horizon - taken at Ocean Beach, SF, and I added that digitally (above, at right), but ya know what?....... it just didn't have that... 'magic' that I look for, where the sum is more than the addition of the parts.
Sooo I went back to the darkroom, and printed it again. After I exposed the dock/shoreline at the bottom and the ship, i questioned the sky I had used before. There must be something better....
And I found it. 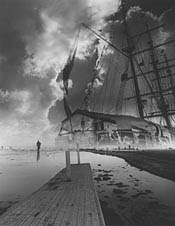 And it was much more compatible/contributory to the concept that was already brewing, that of a 'departure gate for a mysterious cruise'.
And that was the print I can call 'final'.
As usual, for more, a page on website w/ larger images.