The image this month is this one, here's the P'shop sketch: 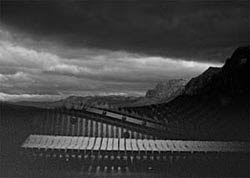 "A classmate from college set me up at Sotheby’s, a company I knew little about. In my interview, I told my future boss that I had never been able to imagine an idea that could be best expressed by painting it. “But,” I added, making exaggerated eye contact, “appreciating art doesn’t mean you can send effective emails. I can write. I can make your job easier for you.” This is the best thing to say in an interview if you are young and unqualified to do anything other than maintain a personal blog. I started three weeks later."

"Here on the shoulder of the information superhighway, smartphones turn stupid, streaming videos shrink to a trickle and a simple download drags like a flat tire.
Darwin is a former mining town cloistered in the high desert mountains between Death Valley National Park and the China Lake naval weapons testing center. Finding it isn’t easy — a sign that marked the turnoff from California Highway 190 was stolen recently." 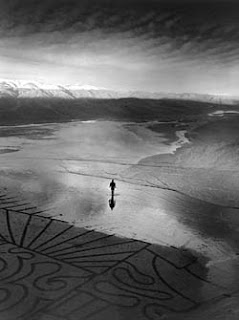 In about 1997, I did this montage (above). The 'sand sculpture'(at the bottom) was shot at Ocean Beach, SF.
Now the artist is getting a bit more (welcome) publicity:

"Its a race against the tide for this artist who spends hours carving intricate artworks in the sand - only for them to be washed away by the sea just hours later. Andres Amador spends hours painstakingly carving giant doodles on the beach some spanning a massive 300 by 500 foot. The American artist carefully sketches each pattern and geometric design in a sketchbook before re-creating the grand design in the sand using nothing more than a garden rake. Andres uses Google Earth to pick out the best beaches for his designs. He then patiently waits for a full moon to make sure tides are low enough for him to complete his design before it is washed away by the sea. The 40-year-old from San Francisco said he has been using the beach as his canvas for the last 12 years and his artwork was originally inspired by the crop circles phenomenon in the UK." 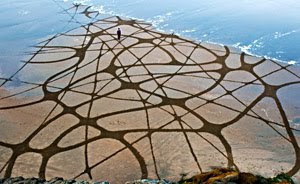 Radical Camera Lets You Pick What's Blurry And What's Not

I dunno... i always know what i want to focus on, and do that, and NEVER have any regrets - what about you?

How Kodak Succumbed to the Digital Age

Best article i have read about the decline of Kodak.

(very beautiful images, but a very fat download - i am on a really fast cable connection, and it still didn't work too well. You have been forewarned...)

--------------------------------------
Photographer Simon Byrne was one of the lucky few given the secret location of a stunning sandstone formation called The Wave.
Simon needed a special permit before he was given "rough guidelines" to find the phenomenon in a remote area of Arizona. Located somewhere in the 112,500 acre Paria Canyon-Vermilion Cliffs Wilderness, the Wave is near the Arizona and Utah border on the slopes of the Coyote Buttes. (Simon Byrne/Rex USA)

Not everyone wants to take ( and settle for?) iPhone images, no way, no how!

Gear Behind the Career: Elsa Dorfman and the Giant Polaroid Camera
By Jakob Schiller - February 7, 2012

The hulking dinosaur of a camera that photographer Elsa Dorfman has based her career on for over 30 years could soon become extinct.

Dorfman, now 74 and living in Cambridge, was first introduced to the 20″x24″ Polaroid in 1980. She had been invited by the company to try one of the 240-pound behemoths that had originally been built in 1976. Simply referred to by the size of the prints it makes, the 20×24 was like a much larger version of the Polaroid cameras most people were familiar with. It only took a few shots to get her hooked.

A Camera as Big as a New York Apartment

On to some photomontage! 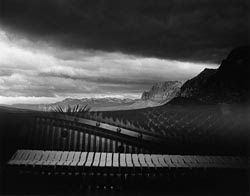 This image (what is above is the final darkroom print) is cut from the same cloth as last month's image - very dark, both negs have almost no shadow detail... but they work for me.
The inside of the piano was shot at the 'Musee Mechanique' at Fisherman's wharf, at a location much nicer... but much less photogenic, than when it was at Cliff House, in SF. Once again, dimly lit, shot at a 30th or 15th of a second - aperture?...wiiiiide open!
The stormy sky was shot at Red Rock Canyon, just east of 'Vegas, Xmas 2008, just before or after the Joshua Tree neg in the previous post's image was shot.

For any of you who have not been to the American desert SW, the 'desert' is anything but sand and sun. Most of these areas are at significant altitude ( 3000-5000 ft above sea level, Flagstaff AZ is at 7000 ft.), and they definitely get winter, and extremes in weather. I shot these stormy clouds and mountains on a day when the temperature was hovering just above freezing. Ya know what that does to the batteries in a Pentax 6x7? It just freezes everything up, the batteries cease to have much energy, the SLR mirror comes up to make the exposure, but not enough energy to pull it down again. Bummer. I got a few frames anyway :-)
(I was glad I also had my old Yashica D in the bag - no batteries, "it takes a lickin' and keeps on tickin' ", no matter how *bleepin'* cold it is.)

The way the curve of the piece inside the piano that connects with the landscape is what makes this hang together.
The 'blend' between the two is pretty tight, just like the last post's image. You gotta get it just right, or it doesn't work. Easy for me to say, I've been doing this for 30 years now...but if you work on it, you will get the hang of it, it will just take some work. But that's what you gotta do.

The strong horizontal dark clouds at the top echo the piano guts at the bottom. So which is in charge? - is the stormy sky playing the tune?... or is the piano playing the clouds and mountains into existence?
Hhmmm... i think it's both, everything in this world is interconnected, isn't it....?

As for the possibility of 'the piano playing the clouds and mountains into existence', that's not such a crazy possibility. Read Bruce Chatwin's book 'The Songlines':

"Aboriginal creation myths tell of legendary totemic beings who wandered the continent in the Dreamtime, singing out the name of everything that crossed their path - birds, animals, plants, rocks, waterholes - and so singing the world into existence."

Put that one in your pipe, and smoke it.
As usual, larger images, including the contributing negatives at: