Here's the image I'll discuss...
But first, from the 'whatever catches my eye' file, which is really fat these days - an old saying goes: 'may you live in interesting times!'... and we definitely, definitely do, don't we?

I am sure we are all watching the aftermath of the earthquake and tsunami in Japan.
There's no words anyone can come up with that mean diddly when something like this happens, I'm not gonna even try. I sit here typing a few miles away from the San Andreas fault - California is often cited as the place where 'the big one' is overdue, and we may well slide into the Pacific Ocean. I think that's a crazy apocalyptic fantasy, probably cooked up by easterners who envy our hedonistic ways ;-)
The biggest quake in recorded US history was in... Missouri!
http://en.wikipedia.org/wiki/New_Madrid_Earthquake
Put that in your bong and smoke it!


As for the Middle East? Who knew an angry Tunisian fruit vendor could inspire such events??
Fareed Zakaria (ABC News) says the Arab world is breaking out from centuries of foreign domination. "Buckle your seat belts. You're watching history in the making," he says.
I sure hope so. They totally deserve to 'break out'!
( I have also read at least one other columnist swiping Fareed's line 'Buckle your seat belts...!')

There is a common connection here - any 'power' that is pent up over time (be it tectonic plates, or popular discontent) will eventually be unleashed, no two ways about it.

I read something very interesting, VERY inspiring at the end of an article in The New Yorker magazine:

Letter from Cairo - On the Square
Were the Egyptian protesters right to trust the military?
by Wendell Steavenson - February 28, 2011
http://www.newyorker.com/reporting/2011/02/28/110228fa_fact_steavenson
The last sentence in the article reads:
'Many people celebrating said that there could never be another dictator now that the public had found its political voice. “We know the way to Tahrir Square,” one told me.'
(In arabic, 'tahrir' means 'liberation'.)
I suspect that most regular people, all over the world, they 'know the way to tahrir square.'

That's gonna be my campaign slogan: 'I drank the bong water.'"
Read more: http://www.sfgate.com/cgi-bin/blogs/dailydish/detail?entry_id=83656
George, you would definitely get my vote!

House Proud - A Glow in the Desert 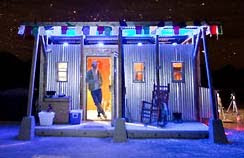 Ever thought about living "off the grid?" ..Well here's a guy who did just that, in west Texas. Don't miss the slide show/accompanying photos!
Published: March 9, 2011 - By Penelope Green
http://www.nytimes.com/2011/03/10/garden/10texas.html?_r=1&src=dayp
Photo by Tony Cenicola/NYTimes 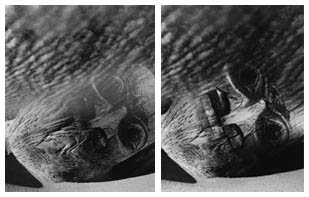 Here's the driftwood face - photoshop sketch on the left, darkroom print on the right
One of things that not having a travel budget of any kind (a once a year/7 day road trip! - 25 or 30 rolls of film!... and a few gigabytes of digital pix!... & a few weekend car rentals) is... it forces me to dig back into the negatives, digital pix, stuff I have already done, and see what else I can come up with.
"Life hands you a lemon? make lemonade!". It's been working out pretty well. :-)

I like this 'totem face' guy - I shot this on a trip to Oregon in 2003, if you ever get a chance to drive the coastal hiway (101) in southern Oregon, from the Umqua Dunes, south to CA, do it. These places are so cut off from most of the world by mountains, it's like the rest of everything doesn't even exist.
The totem face was shot somewhere along the way, it was in front of a defunct real estate company, a very clean, clear easy shot, one that I have gotten a good bit of mileage out of.
The driftwood was also shot somewhere along the Oregon coast, as was the sky. So it's 'all Oregon' here.
This one is mostly about textures - the striations in the driftwood.. and in the totem face...complemented by the sky. But it's even more about the 'face'!
Wouldn't you be shocked to see this piece of driftwood on the beach??
I sure would! His gaze is penetrating... his origin? who knows! Even if he's lying on his side, his stare is still penetrating.
The dodging and burning on this one? ... a good bit more free-form than usual. And much more free form than the previous blog entry "The Winding Path", in which the dodging/burning was confined to a narrow area in the middle.
This time I started from the bottom, exposing the driftwood - kept the dodging tool at an angle so as to expose more on the left side than the right.
Next came the totem face, burned in thru the 'black card w/ a circular hole in it' tool.
Finally the sky, which I think I did roughly horizontally, and overlapped what was below a good bit. I've found that I am better off overlapping more than not overlapping enough. Since I am scanning all these for any future prints, and can use Photoshop to lighten things a bit, overlapping more is better than not having enough, and having an area that's too light and doesn't have enough image to be able to adjust, either digitally, or in the darkroom w/ a copy negative.
As usual, much more at a page on my site:

And if you hadn't clicked the link to my 'darkroom methods' page, here's an updated version:
www.bobbennettphoto.net/BeachBlog_2011/Tools/index.html

What's up next? I'm not sure, I still have four new darkroom prints waiting in the wings.. and also a lot of digital montage. Unfortunately, a lot of the digital montage seems, at this point, to be half finished. I have 60+ files, only a few of which really 'sing'. But who knows what will happen with them in 3 or 4 weeks.
Posted by CaliforniaSilverwizard at 12:11 PM No comments: