Darkroom - 'Stories to be told'

Tell me a desert story - a myth, a parable, whatever.

Let's go back to the darkroom for a spell, this one was done late last year.

Top part of this is a sandwich, some rocks at a place called '7 Sisters' in Valley of Fire SP in Neveda, and a desert bush of some sort. 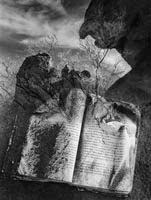 I did some PSD sketches that used the the 7 sisters rocks, and combined it w/ other things, but they just didn't 'ignite', didn't feel like they were worth printing.

I had scanned the proof sheet.
A plant is also on the same roll, i can't keep these plants straight, it is either a creosote, or an ocotillo. Or maybe something else entirely. It waves sadly and slowly in the wind.
I just had an inkling something might be going on by sandwiching just these two, so I pulled out the negs, and sandwiched them manually, held it up the the window light and thought 'aha!', that's IT!

Almost immediately I remembered a neg taken a long time ago.

The bottom part is a book left on Ocean beach in SF, and has been significantly weathered, the scene untouched by human hands. I took it 20+ years ago. And now it comes in handy. Don't ask me what i had for dinner last night, but i can remember this neg after all these years.
Once again, it's all about something other than software and photoshop - the best software is between you ears, and that's what I use to connect these negatives together, and weave them into montage images. 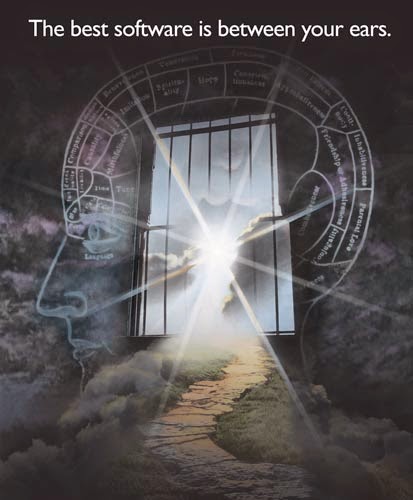 I flopped both negs so the light direction would match up w/ the book, which i don't want to flop, seeing as how you can read the text.
That I shoot negs for hi-lites, and let shadows fall into black (or close to it), continues to work just fine. The shadow in the rocks has just a bit of detail, just enough to add some interest/contrast to the sandwiched plant branches. 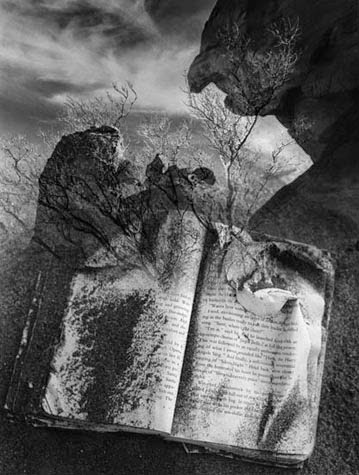 I tried out a digital/colored version of this....
Digital colorization many times feels false/forced, to me, though I've been getting better at it. Some images are conducive to this, others just aren't. 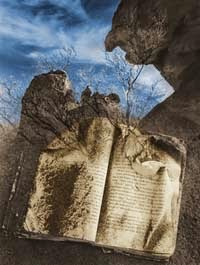 There are stories here, in this book, and in the desert... you just have to take the time and effort to read.

In the 'whatever catches my eye' file this month:
Slate Magazine: A quiet yet profound look the the American West
By Lisa Larson-Walker 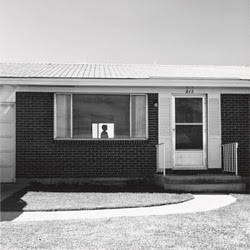 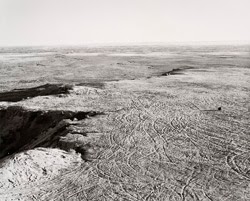 and one last parting suggestion:

Go to the beach, if you can, you'll be glad you did. ALWAYS!
Posted by CaliforniaSilverwizard at 5:50 PM No comments:

Labels: beach, Black and white darkroom montage, black and white photography, california beach, california coast, darkroom montage, photomontage, surrealism
Newer Posts Older Posts Home
Subscribe to: Posts (Atom)
I do both traditional B&W darkroom work (most notably photomontage), and digital work.
So the post topics alternate between the two.
I still feel that I am at my best... in the darkroom.
http://www.bobbennettphoto.net/DarkRm2/index.html