Constant themes - do you have some?

After a few years of (serious?) photography do you have some constant themes running thru your work?
I sure hope so. That means you are focusing on something, hopefully refining your vision.
I recently dug into some 16x20 boxes of montage prints i had made way back east, a loooong time ago.
It was revelation - i found prints i had made almost 30 years ago that had very similar themes to much more recent work, in particular, a chair in the middle of some kind of bizarre enviroment. It awaits a visitor. Print done in... oooh... about 1988 or 89. 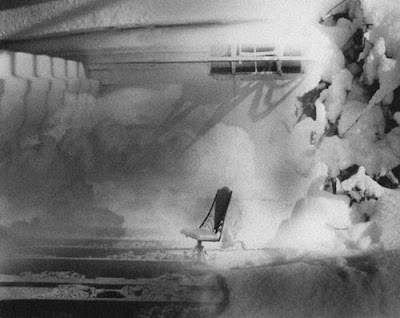 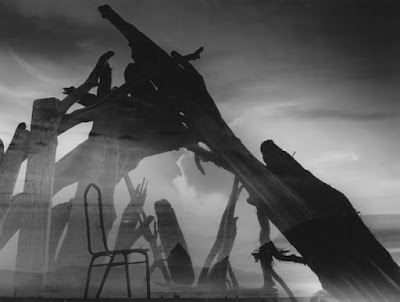 And a direction sign, a huge arrow, pointing to who knows what.
The old version: 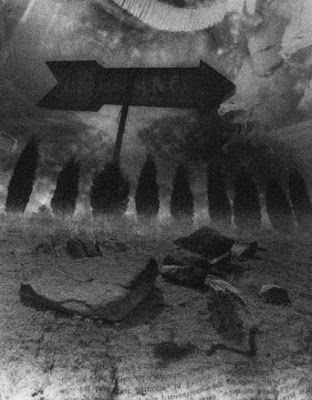 A west coast update, the raw neg, somewhere around the Salton Sea. 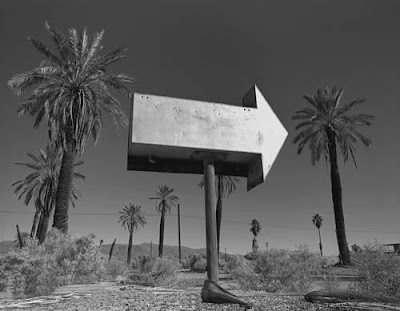 What i did with it in the darkroom: 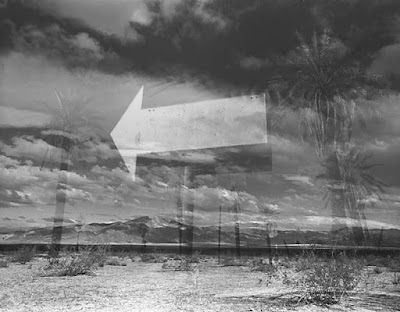 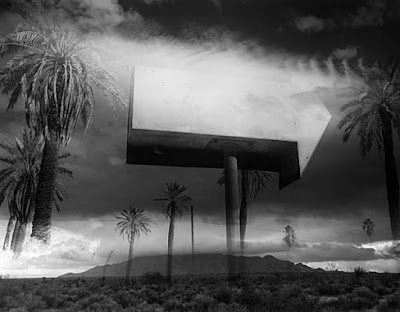 And a photoshop sketch I have in the works, this is how I figure out what I want to print, and get some idea of how it might (notice the choice of word 'might' as opposed to 'will') work out. 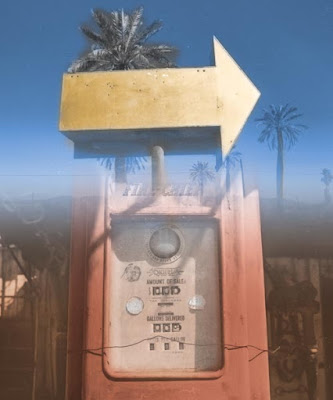 I've done some serious colorization here... but more on that in a future post.

RE moving to Ca. in 1992 - here's a really interesting article:
My Dark California Dream 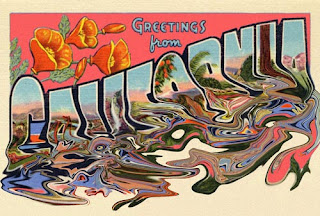 "Our parents had wide open spaces all around. We still had nature within reach. Now what?"

I am a transplant from the east coast - arrived in SF on NY's day, 1992, with just what i could fit in a Subaru hatchback. Now that's travelin' light, ain't it? I had no great vision or design, or expectations of some kind of 'golden state' stuff. I had visited SF a decade before, on business for an ad agency i worked for, to do a shoot. The photog's ass't got me ridiculously stoned on Hawaiian weed, i loved the way when i woke up on the tenth floor of a hotel on Nob Hill, it was foggy, couldn't see beyond a block or so.
By noon, sunny, beautiful. At least where we were, 'south of market (street)' in SF.
Unbeknownst to me at the time, at the coast it was still socked in, i am sure.

I also went to Reno a few years later to do a shoot for Brick Institute of America, a firehouse in Sparks, NV. I had included a '(bad)weather day' in the estimate, and sure enough the first day was cloudy/murky, no good for shooting.
The car rental agency didn't have the compact i had asked for, so they gave me... a fucking Cadillac, coupe de ville! Lucky me. And lucky me that i took it up into the hills...
Civilization melts away, there is nothing but raw land and cactus of various sorts.
Color me thunderstruck, it stuck in my mind.
Which is why i came back. For good.

I don't think California is over, it's just going thru some 'ch-ch-ch-changes'.
Got it? What city or state hasn't in the last 20 years??

"Our parents had wide open spaces all around. We still had nature within reach."
Now what?"
So you'll have to walk a bit further. Big fucking deal.

I take a 15 minute commute from San Rafael to Novato every day, and yes, i see alot of suburban sprawl, but i also see many huge hills, open space, way more than what has been settled/suburbanized.
If you think the world will stand still so your vision of it will remain true? You're a dreamer, and i don't mean that in a nice way.

I've been here 23 years now, and i still fee like an easterner - alot of Californians come across to me as being a bit spoiled, self centered. Maybe that's as much about my upbringing as it is about the natives.

Posted by CaliforniaSilverwizard at 5:50 PM No comments: