There will be a link to a page on my website at the end of the post that will have larger images, screen shots of the PSD files showing the layer palette and small PSD files you can download.
The first 2 images to discuss are digital shots of the sun, which i liked for the starcross thing (didn't need a filter to do this - dig camera lenses suck, and do this with no help), but needed to change them a bit so i could drop it into anything else with mucho flexbility. I wanted a light one, and a dark one.
For the light one the capture had a major flaw, there were some palm tree leaves in one image at the edge of the frame. 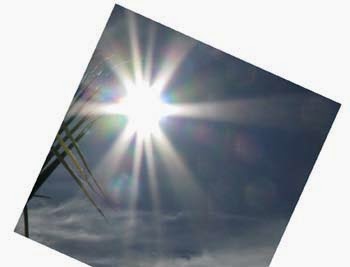 So I copied part of the image, flipped it horizontally and merged the two. Then i copied that layer, flipped it vertically and that finished it off - almost. Then i used a white circular gradient ( from transparent to 100%) and it was done. 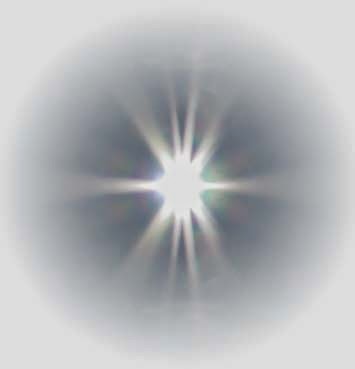 The other one, similar technique - copy, flip, merge, copy and flip again.
Here's the starting point: 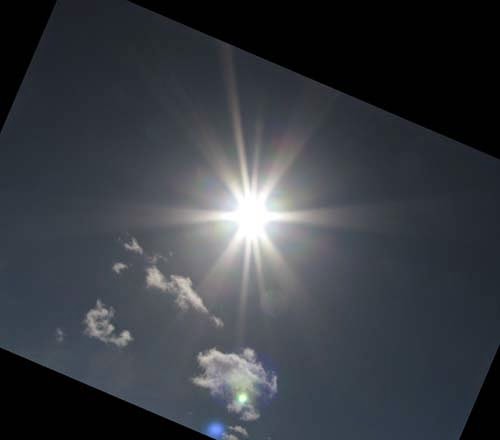 Here's where i ended up: 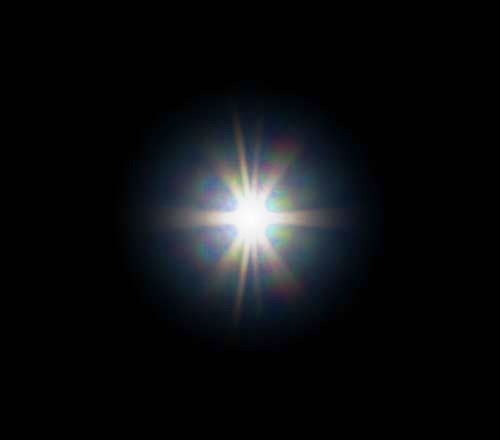 (I also hit this one w/ a severe 'Hue/Saturation' layer to play up
all the wierd things these cheap digital camera lenses do.
Whatever lands in your lap, do something with it, ya know?)

So now that I had some nice 'suns' what did i do with them?

Added one of them to a rather dark and somewhat ominous sky symmetry... with some waves dropped in and copied and flipped symmetrically. The 'icing' on the cake was one of the suns.
I used the same approach as other 'symmetry' images, copying layers, flipping horizontal and vertical, lining them all up (use 'guides' in P'shop, and make the 'snap to guides' option active, (it's in the 'view' menu choice on the top of the menu bar) they are very handy :-) ) They ain't perfect, so enlarge image to 100% in the navigator, and push the layer back and forth until the seam is purrr-fect. 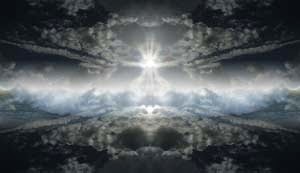 Larger images, and screen shots of the psd files with the layers palette, and downloads of psd files at:
www.bobbennettphoto.net/BeachBlog_2014/WheresTheDigital/2.html


In the 'whatever catches my eye' file this month: 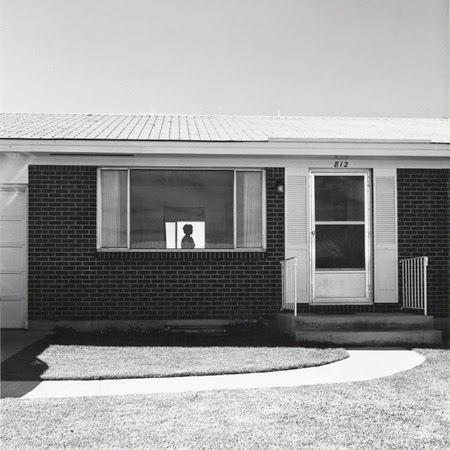 In other beach and ocean related news:

While we are exploring the ocean depths w/ incredible new technology:
http://news.yahoo.com/deep-expedition-seeks-life-ocean-trench-135005336.html


.....sometimes something amazing just 'falls into our hands', so to speak:

But some news ain't good at all:

And last but not least one small nugget of wisdom:

Enjoy life - this is not a rehearsal.

...and 'trashing the planet' (as noted above) is not a rehearsal at all.

In fact it is the first act in a tragedy, still unfolding.
I don't think we have a clue. Dinosaurs lasted for millions of  years.
We won't even come close.


Posted by CaliforniaSilverwizard at 12:09 PM No comments:

Labels: beach, california beach, california coast, digital photography, digital photomontage, ocean, photoshop techniques, surrealism
Newer Posts Older Posts Home
Subscribe to: Posts (Atom)
I do both traditional B&W darkroom work (most notably photomontage), and digital work.
So the post topics alternate between the two.
I still feel that I am at my best... in the darkroom.
http://www.bobbennettphoto.net/DarkRm2/index.html