First...from the 'whatever catches my eye' file...

So Much More Than Plasma and Poison
http://www.nytimes.com/2011/06/07/science/07jellyfish.html?_r=1&src=dayp
By Natalie Angier
Published: June 6, 2011
Among nature’s grand inventory of multicellular creatures, jellyfish seem like the ultimate other, as alien from us as mobile beings can be while still remaining within the kingdom Animalia. Where is the head, the heart, the back, the front, the matched sets of parts and organs? Where is the bilateral symmetry?

Digital camera sales may be weak, but thanks to cellphones, picture-taking has never been more of an everyday thing. Now a wave of mobile applications is letting people tweak their cellphone snapshots and share them with friends and strangers.
http://www.nytimes.com/2011/06/04/technology/04photosharing.html?_r=1

How much longer can photographic film hold on?
http://news.yahoo.com/s/ap/us_film_s_fade_out

On Virginia’s Crooked Road, Mountain Music Lights the Way
http://travel.nytimes.com/2011/05/22/travel/on-virginias-crooked-road-music-lights-the-way.html
By SARAH WILDMAN
Published: May 20, 2011
IT starts with a well-worn fiddle, held in equally well-worn hands above a tapping black cowboy boot. Then in comes the banjo, plucked with steel finger picks, followed by the autoharp, the mandolin, the percussive beat of an upright bass. Another banjo grabs the melody, and suddenly the room is bursting with knee-slapping, country-porch music....


http://www.nytimes.com/2011/05/22/us/22snow.html?_r=1&hpw#
Record Snowpacks Could Threaten Western States
By KIRK JOHNSON and JESSE McKINLEY
Published: May 21, 2011
STEAMBOAT SPRINGS, Colo. — For all the attention on epic flooding in the Mississippi Valley, a quiet threat has been growing here in the West where winter snows have piled up on mountain ranges throughout the region.
Thanks to a blizzard-filled winter and an unusually cold and wet spring, more than 90 measuring sites from Montana to New Mexico and California to Colorado have record snowpack totals on the ground for late May, according to a federal report released last week.
Those giant and spectacularly beautiful snowpacks will now melt under the hotter, sunnier skies of June — mildly if weather conditions are just right, wildly and perhaps catastrophically if they are not...............

The Trouble With E-Mail
http://opinionator.blogs.nytimes.com/2011/05/29/the-trouble-with-e-mail/?hp#
May 29, 2011, 5:30 pm
By VIRGINIA HEFFERNAN
The idea that e-mail is chiefly a conduit for anger and lies seems almost quaint. After too may careers ruined and personal lives upended by online indiscretions, it should now be crystal clear that there are some things one must never, ever commit to e-mail.
And that’s why some bankers developed “LDL.” “LDL” — which means “let’s discuss live” — is an acronym that surfaced during the S.E.C.’s investigation of Goldman Sachs for its role in the nation’s financial shame spiral... 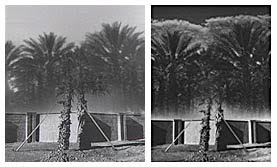 At left, my photoshop sketch, at right the final darkroom print

I've mentioned before that my montage images come from a variety of inspirations - sometimes it's about a concept, sometimes it's simply something visually surreal, sometimes somewhere in between the two. And sometimes it's just plain 'winging it'.
This one is definitely 'concept'. It had been kicking around as a drawing on tracing paper.. & then a P'shop sketch... for quite a while, and I finally decided to do something with it. Like..uh... print it.

I shot the palm trees that are propped up in front of a wall somewhere in southern Ca., the desert. There's a number of attempts at development there that never came to fruition. I think the wall was 'sposed to enclose a nice subdivision... but just 'cause you think it can be built, doesn't mean anyone will show up. And no one did, and these poor palm trees were left to suffer...

The forest of very healthy lush palm trees (behind the wall) was virtually a farm - the trees in very nice rows.

M.C. Escher would love it!
What? you don't know who MC Escher was?
I thought this was just my blog, but if i have to educate you, OK, here goes...
http://www.mcescher.com/
http://en.wikipedia.org/wiki/M._C._Escher

Oddly enough, both images were shot on the same trip, in the mid-90's..took a while to put the two together, but once it landed in my brain, it stuck - the forest was on the other side of the wall, trying to help it's prodigal brothers/sisters.
Yeah... definitely, 'strength in numbers'! Or maybe i should call it 'prodigal palm trees'...?
The dodging / burning on this one is really pretty simple - the two palms @ bottom are dodged out part way up the palm trees, the palm trees at the top blended from top to bottom, ending just above the top of the wall.

I also added some nice clouds above the palms, at the top, which are actually flipped vertically to wrap around the palm tree tops.

Technically?... simple. Putting it all together, and knowing what to do? Not so simple - many miles of driving... many rolls of film, full of frames that were made thinking "There's something about this i like, I'll shoot it now, and figure it out later". And then a few more years until a light goes on inside yer head - "Aha! That's it! that's why i took that frame."

As usual, more/larger images.. at a page on my site: