Here's a watch that you won't find in any store, anywhere..
And you can't put it on your wrist.
I've titled it "Desert time".
Glad i took time to revisit a P'shop sketch of this image and then added the 'sandwich' at the top, and a prickly pear cactus along the rim of the sundial, worked out very nicely.

As usual, it started out one way (the first P'shop sketch, below)... 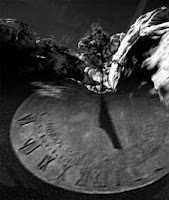 ..and ended up coming out of the darkroom much differently.
When/if that stops happening?... i will know it is time to get treatment for alzheimers or dementia... park my ass in an old age home, and play shuffle board and card games.
(Nope, ain't there yet! No way, no how!)

[On second thought, maybe the dementia would be inspiring, and interesting... at least for me, a guy who dropped acid at least 50 times in the late 60's/early 70's.
Hey... who knows... the mind works in mysterious ways, doesn't it?]

For the time being, i am working same as always - some planning, but it's a springboard... and much improvisation.
Improvisation is definitely the best way to go.
I revised the sketch just before i did the print.
The top part is a sandwich of 2 negs - a landscape in Nevada, with this lonely tree growing out of rocks...and a sky.
The bottom part is a sundial, i shot in Golden Gate Park, SF.
But the sundial didn't 'end' the way i wanted... at the bottom. 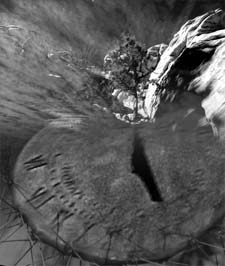 So I dodged out the bottom part, anything outside the sundial, and then burned in the (prickly pear) cactus.. to surround it ( as in the sketch above), and make it seem to 'float' in desert space...
The sundial definitely becomes a 'desert time piece', the rocks and the tree being the engine to mark time by another standard. 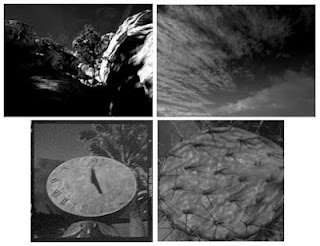 And how did it end up? 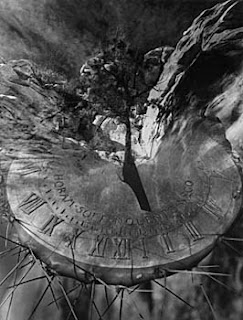 As usual, larger images at a page in my website:

Bear w/ the ads, it's only a few seconds, but definitely listen to Robert Lamm's atonal/ rambling piano intro ( marvelous!).... and continue on.
Chicago's first album was awesome. As was Terry Kath, their lead guitarist.

Posted by CaliforniaSilverwizard at 4:56 PM No comments: