I have liked crows for a very long time, since i was growing up in a small town in Maine, where i could walk to the far end of my street in wintertime to a place, a big hill to sled down, and walk into open land, pasture, a farm.
There were 4 colors - white, green, blue.. and black.
Snow, pines, sky and... crows.

As i have come west (to California) in 1992, and explored the land, there are two constants in the desert, the middle of nowhere - telephone & power lines.. and crows.
They are scavengers, opportunists - carniverous, vegetarian, omnivores,  and smarter than we would want to admit.

"Corvus is a widely distributed genus of birds in the family Corvidae. Ranging in size from the relatively small pigeon-sized jackdaws (Eurasian and Daurian) to the common raven of the Holarctic region and thick-billed raven of the highlands of Ethiopia, the 40 or so members of this genus occur on all temperate continents except South America, and several islands. In Europe, the word "crow" is used to refer to the carrion crow or the hooded crow, while in North America, it is used for the American crow, fish crow, or the northwestern crow.

Recent research has found some crow species capable of not only tool use, but also tool construction. Crows are now considered to be among the world's most intelligent animals with an encephalization quotient equal to that of many non-human primates."

I have some images, over the years. A crow sailing over the Marin Headlands, dancing in the updrafts: 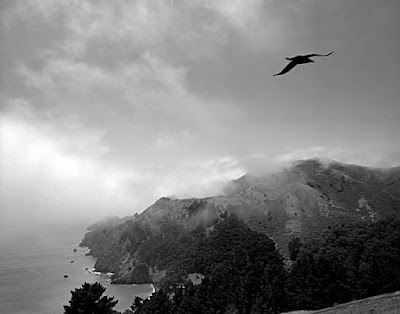 Another crow that i photographed at Drakes Beach/Pt Reyes Nat'l park.
I was in my car, in the parking lot, which had a fence of sorts, with wooden posts, chains between the parking lot and the beach.
I tempted this bird with bread crusts on the fence post tops., staying just far enough away so that it would snatch, but close enough that w/ a wide lense, i would get at least one good frame. It took a roll and a half (15 frames on a pentax 6x7/120 film). 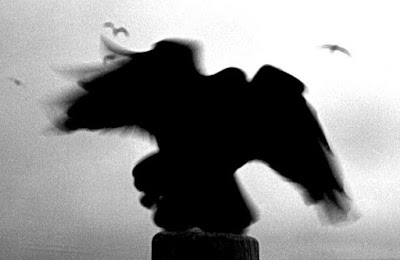 And in Death Valley, they are always there. Why wouldn't they be? It is Death Valley after all, and crows are scavengers. 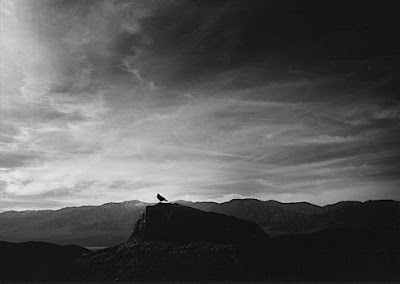 I included it in a book i am close to publishing: 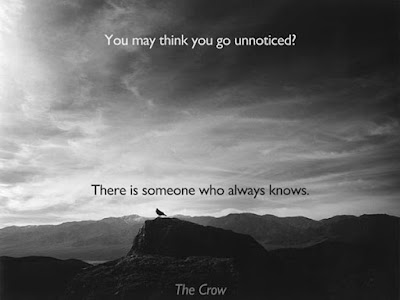 Of course, I had to get creative in yet another way with that one: 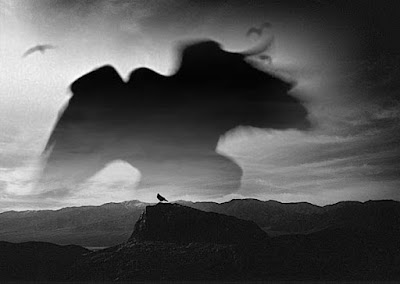 And later in the darkroom, this image came about. 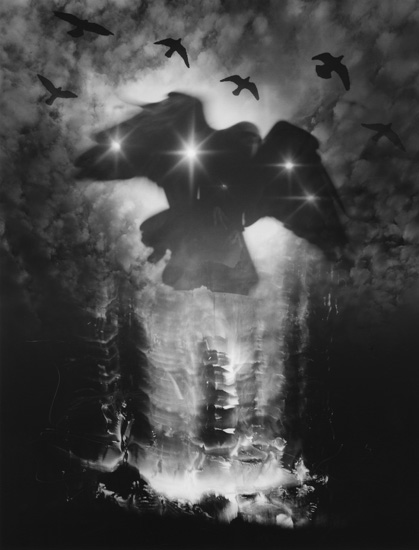 At the bottom, a campfire, slowly burning out, Above that a shot with the camera in motion, the dying flames. Above that the crow, sandwiched with some 'pseudo - ' stars some sky/clouds, and some birds, a lith neg,
Let's see.... that's 5 exposures.
Don't know exactly how i arrived here, but happy i did.
The end justifies the means.
---------------------------------
A 'Murder of Crows'
Full Episode - PBS
Premiere date: October 24, 2010 | 0:53:10 | Buy the DVD
Although cultures around the world may regard the crow as a scavenger, bad omen, or simply a nuisance, this bad reputation might overshadow what could be regarded as the crow’s most striking characteristic – its intelligence. New research indicates that crows are among the brightest animals in the world. NATURE’s A Murder of Crows brings you these so-called feathered apes, as you have never seen them before.

Read the comments on this page before you go to the video episode. My browser and computer (both old an somewhat outdated) didn't react to this too well. I hope you have better luck.

Soooo... don't call anyone a birdbrain again - they can fly - can you?
They are the last of the dinosaurs... i think.
The final scientific verdict on this one is still out...

And about that asteroid that hit planet earth, and caused dinosaur demise?
Who T. F. knows!

Posted by CaliforniaSilverwizard at 5:38 PM No comments:

Labels: Black and white darkroom montage, black and white photography, california desert, photomontage, surreal photomontage, surrealism
Newer Posts Older Posts Home
Subscribe to: Posts (Atom)
I do both traditional B&W darkroom work (most notably photomontage), and digital work.
So the post topics alternate between the two.
I still feel that I am at my best... in the darkroom.
http://www.bobbennettphoto.net/DarkRm2/index.html