I have always thought that the beach is a marvelous place to think. Not just about your boss, wife, or kids, and however good or bad they are, but also about all the natural processes going on in the real world. Creatures and plants grow and die, rocks seem immutable, but are in a slow motion state of transformation, always being sanded, shifted, and remade, redacted, and different just slightly with every wash of the waves.

This is how geology works too - tectonic plates are always moving ever so slowly.
Until they quake.
As John McPhee has written - 'the rocks on top of Mt Everest are marine shale'.
Marine shale - at 29,000 feet elevation.
Put that in your pipe and smoke it!

So here's a look at what's under your feet at the beach sometimes - a lotta pebbles.
Small, but their story is not insignificant.
All sanded, tumbled, washed by the ocean. Glistening before you. 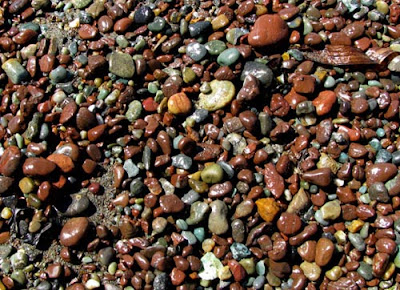 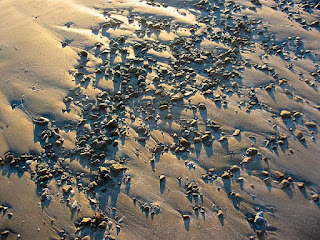 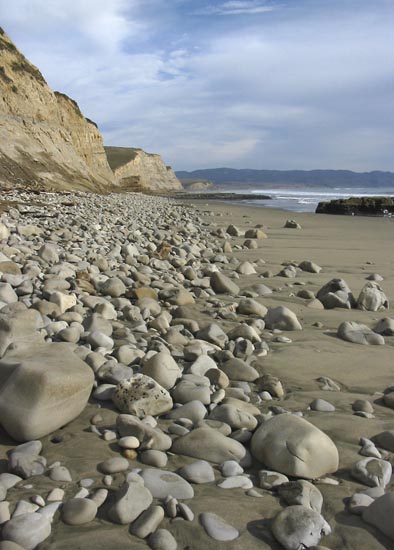 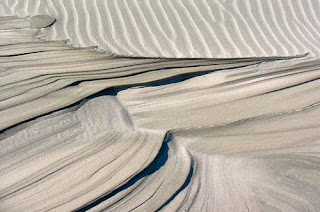 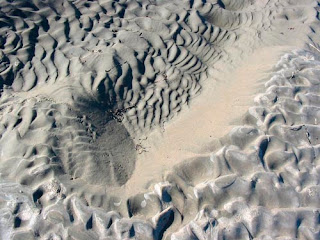 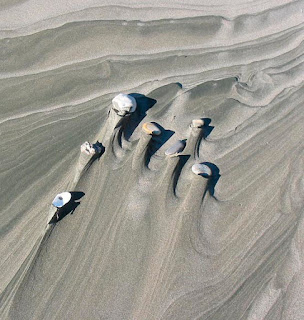 A canvas for the travels of some little critter. 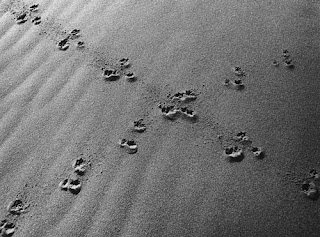 This is also about much wider, wilder topics -
Why the hell  are we here?
Tumbling around like the pebbles on the beach...?

Here's what i do with sand in the darkroom: 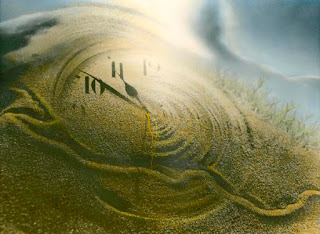 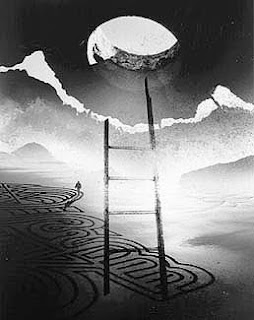 ((There's a guy who comes to Ocean Beach in SF every once in a while, uses a rake
to carve designs in the sand, at low tide. That's his 'canvas'.
His work is short lived. Aren't we all? My negs will keep a bit longer than that.
I combined a shot of that with a ladder and the top of an old military ruin in Marin Headlands.
Reminds me of Jimi Hendrix version of a Bob Dylan song:
"There must be some some way outta here, said the joker to thief....."
If you haven't heard that track, you owe it to yourself to find it...
and play it really REALLY loud.))

And what did i do 'digitally'? 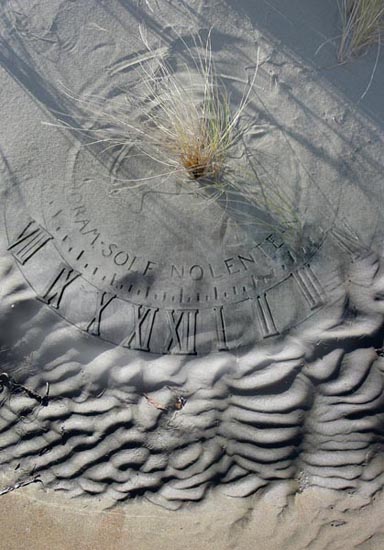 We don't know how good we have it!
Digital photography is so, soooo easy.
Read this:

"Carlton Watkins often used the wet-plate process to make his pictures. It was a laborious, expensive technique that with time, patience, and luck could yield exquisitely detailed images on glass plates. His famed mammoth-plate photographs, made with a custom-built camera that accommodated plates as large as 18 by 22 inches, were materially and financially exhausting. Making them required thousands of pounds of cameras, lenses, glass plates, plate holders, tripods, a dark tent for developing, and a mobile laboratory of volatile chemicals. Watkins often traveled by railcar, but just as often by steamer or mule train, as he did to photograph Yosemite Valley beginning in the late 1850s. It was worth the effort. His iconic panoramas of Yosemite and San Francisco would ensure his lasting fame. As historian Martha Sandweiss argues, the glass-plate pictures made by Watkins and his peers made California and the West “a familiar place to millions of Americans."

I have been entranced by petroglyphs for a long time, anything about that catches my eye, gets read.

"Jonathan Bailey’s haunting photographs of Western pictographs join essays by Lawrence Baca, Greg Child, Lorran Meares and others to tell the larger story of a disappearing cultural heritage and the need for its conservation. Rock Art: A Vision of a Vanishing Cultural Landscape brings an ancient people to life through their stone-etched images, many of which are threatened by development and vandalism. “What will the future be for these images?” Bailey asks."

There are the two sides of human behavior visible below.

The beauty of the petroglyph, made by people with little technology but great spirit,
to want to record something in the stone,
speak out to whoever passed by for a long time. 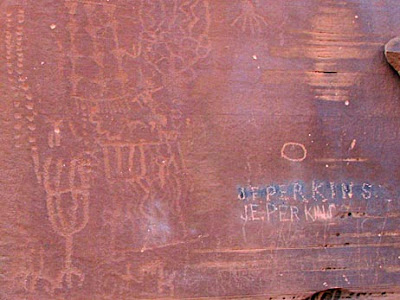 And the ugliness of whoever defaced and desecrated their efforts.

Here's my favorite one: 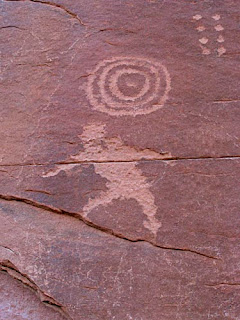 "Dancing Man"
This reminds me of the high wire walker who went from one World Trade center tower to the other.
Did the creator of this glyph take into account it's positioning, standing on one crack,
seeming to 'hold' another? No one will ever know.
----------------

Last but not least? wouldn't ya just know it, from the NY Times!
"GPS is just one more way for us to strip-map the world, receding into our automotive cocoons as we run the maze."

Read this, an excellent way to spend a few minutes!

As always, quoting the terminator, "Ah'll be back".

Posted by CaliforniaSilverwizard at 11:18 AM No comments:

Labels: Black and white darkroom montage, black and white photography, california beach, digital photomontage, geology, hand coloring, photomontage, photoshop techniques, sand, surreal photomontage
Newer Posts Older Posts Home
Subscribe to: Posts (Atom)
I do both traditional B&W darkroom work (most notably photomontage), and digital work.
So the post topics alternate between the two.
I still feel that I am at my best... in the darkroom.
http://www.bobbennettphoto.net/DarkRm2/index.html