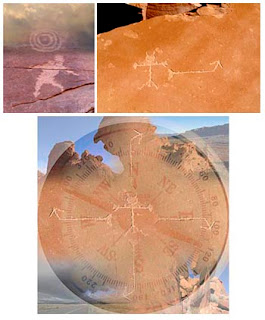 My approach to digital montage is, of course, the antithesis of darkroom montage - you can 'get something started', then save it in suspended animation (photoshop) 'til you see what you want to do next.

I'm sure I'll be opening one or more of the 550+ digital pix I took in Nevada last X-mas for quite a while - I've tossed together about half a dozen 'getting something started' files, two in particular I knew immediately had stronger potential than the others - they included petroglyphs:
A human figure that seems to be tightrope-walking between two cracks...
and a figure w/ an arrow ( which seems to be a 'direction' sign).

One of the big reasons I took this particular trip was to see petroglyphs, and I was not disappointed.
The two mentioned & shown above are the only ones I saw that were 'understandable' in any way, to me/anyone in the oh-so-'developed' 20th/21st century.

The 'direction sign' is very clearly exactly that - it is situated along the path to a tinaja in Red Rock canyon.
(A tinaja is a place where water collects, and remains, in recesses in the rocks, long after a storm has passed by.
This is definitely a place where people would hang out for a while, water being essential to physical survival, and not easy to find in this kind of enviroment.)

It is about 50 or so feet up & off the trail, carved into the vertical face of a rock that could crush your house into bits, unless your house was as big as... oooh... Steve Gate's or Larry Ellison's.


As for the 'tight rope walker'? I continue to wonder what the artist meant by placing the figure in this spot.
Is the figure 'walking' on the lower crack? I would answer 'yes'...but that's just the answer from a 20th century guy who wants to see a logical explanation of things.
Is the figure using the upper crack in anyway? is this significant??
Your guess (and they are guesses, aren't they?) is as good as mine.

One thing about actually seeing a good amount of 'glyphs is... that you come away w/ more questions than answers. And it is impossible not to be awed.
Only a few are at easy viewing distance/ close to ground level - most are 25...50...75 or more feet above the beaten path. And I do mean 'above' - & very dangerously so!
( As I was walking along these trails, there were others who brought binoculars to view the glyphs, that's how high up they are!)
It took a whole lot of effort to do these, so they must have been important, in some way.

I have read in a number of places that the earth and this place in particular was significantly warmer and wetter a thousand years ago - even taking that into consideration, this is one very difficult place to 'make a living'.
That these people made the effort to carve these signs/signals... & 'worship'(that's really what it needs to be called) is amazing.
I ended up feeling really small... and stupid.
But that's a good starting point, isn't it?

Here's a few links to pages about ancient rock art/etc:

http://www.socialfiction.org/
(this one is very strange, but very interesting)

On the topic of 'creating messages that will stand the test of time' -
which is indeed a big question we need to answer, and seeing and attempting to interpret petroglyphs raises this question:

To get back to the images, which are a small concern, compared to nuclear waste dumps...
One, in particular, deserved much additional work:
the 'direction sign' ... and a compass, they are the images above.

As usual, much more on a page at my website:
(Including some of the 'getting something started' image files, and a screenshot of all the layers that make up the bottom image, above)