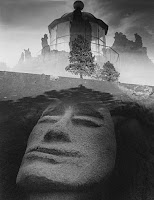 I found this face carved in soft sandstone on Ocean Beach, San Francisco, some years ago. I will hope he is dreaming, and not dead. 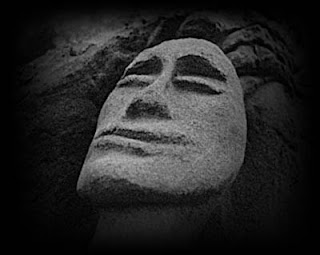 The landscape - the horizon, the two trees, is at Sunset Crater in Arizona. 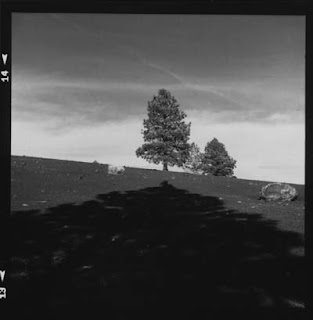 The ragged rocks above it - tufa at Mono Lake in Ca. 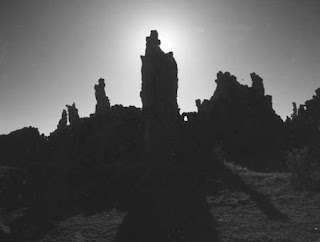 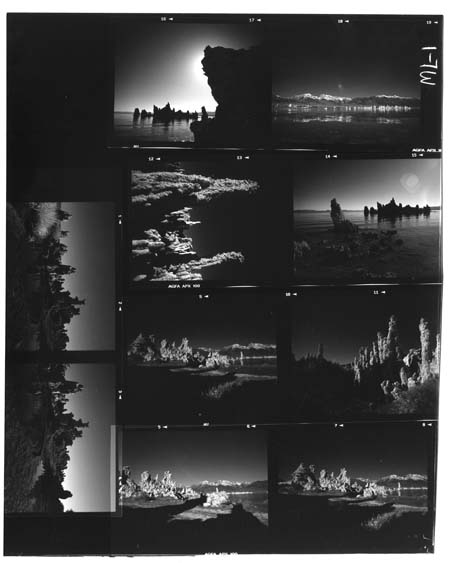 The lighthouse superimposed at the top is at Pt. Bonita in the Marin headlands, just north of SF.
What does it all mean? Perhaps dreams foster thoughts ( = the trees, which grow) ...which then beget difficulties of whatever kind ( the ragged tufa rocks)... but there is light at the end of this tunnel, the lighthouse shines on. Perhaps this is about the power of thought, mind over matter? 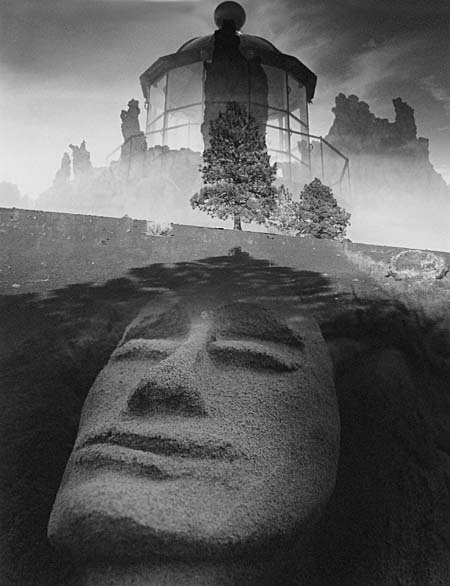 Technically, it's not hard. First exposure, the sunset crater trees and shadow, with a good bit of the shadow dodged back to accommodate the face. Then, i burned in the face, then added the tufa, and the lighthouse.
The same simple tools accomplish everything.

this one deserved some hand coloring: 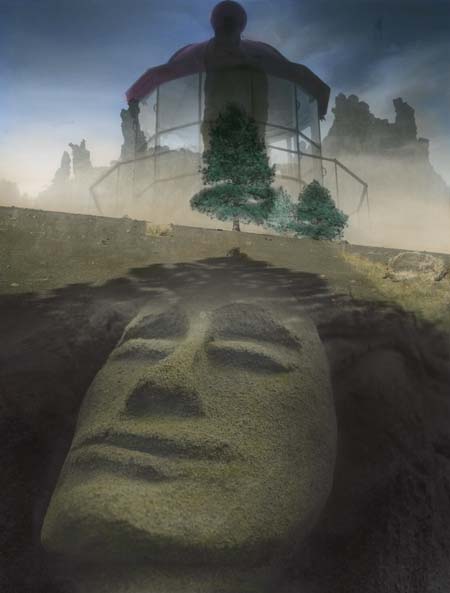 Many years ago, i wrote a statement of sorts.
(Alotta things in the world change in a heartbeat these days.
I don't mind being slooooow. It comes with age ( 64 YO) I am OK with it.)

I collect negatives by taking myself, and simple camera, to places I love - the California coast, and desert - and start walking.
I spend a lot of time with my proof sheets, and in a small room, under a dim red bulb. I'm obviously interested in things metaphysical - beyond that, it's up to the viewer to decide what's going on.
If I haven't figured them out yet, (and I haven't, not really), why should I presume to explain them to anyone else? Many of the pictures just seem to 'happen', because the individual negatives are 'looking for each other'. I'm just a chaperone, and a really loose one at that. But those were always the best kind of parties, right?

"I'm just a chaperone, and a really loose one at that..."
After all these years, this rings truer than ever.

I don't remember where the idea for this one came from, i think i linked the face with the huge shadow in the landscape first. I regularly sift thru PSD sketches, add subtract to them, print them out quickly letter size, leave a pile of them on my floor, and look thru them once in a while, maybe take a fistful in my bag, and look thru them during my bus commute to work. A 20 minute bus ride is a nice time to let the mind wander as the landscape rolls by. Rumination is a good way to describe it.

Which brings me to the 'whatever catches my eye' file:

The End of Reflection - Future Tense

“Finding moments to engage in contemplative thinking has always been a challenge, since we’re distractible,” said Nicholas Carr, author of “The Shallows.” “But now that we’re carrying these powerful media devices around with us all day long, those opportunities become even less frequent, for the simple reason that we have this ability to distract ourselves constantly.”

http://www.pdnonline.com/features/The-Surprising-Fate-of-Film-16660.shtml
(It ain't dead yet folks, get used to it!)

Not a week goes by that i don't read about some new discovery in the ocean: 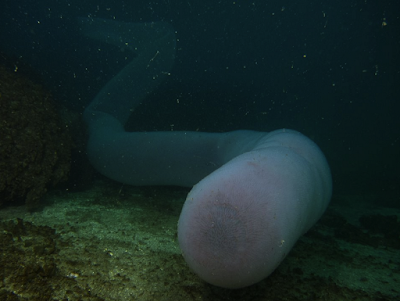 -------------------
It's the oddballs & wierdos that make the real progress. See a movie called 'the imitation game' about the gay british guy who invented a rudimentary computer to crack Nazi code.

"When he wasn't blackmailing lords and being sued for libel, William Playfair invented the pie chart, the bar graph, and the line graph."  By Cara Giaimo June 28, 2016

I'm definitely going to get this one, if it ever shows up on Netflix!
Posted by CaliforniaSilverwizard at 1:50 PM No comments:

Labels: Black and white darkroom montage, black and white photography, darkroom montage, darkroom photomontage, editorial opinion, hand coloring, ocean, surreal photomontage, surrealism
Newer Posts Older Posts Home
Subscribe to: Posts (Atom)
I do both traditional B&W darkroom work (most notably photomontage), and digital work.
So the post topics alternate between the two.
I still feel that I am at my best... in the darkroom.
http://www.bobbennettphoto.net/DarkRm2/index.html