Did just 3 step tests for the exposure on the 3 negs, as a half sheet.
The first final was really nice, a little bit light, needed more sky, but still quite presentable.
Did 1 more, lookin' even better. 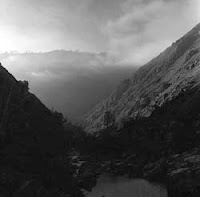 2 - At the top, small bas-relief sculpture of the man and the skull,  from someplace in downtown SF, i don't remember where, on the front of some building. 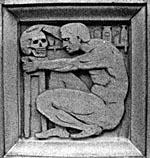 This one was rather premeditated, and followed my P'shop sketch, a good place to start, get 'warmed up'.. so to speak.
The image at the bottom of the Kern River gorge has always had a rather 'pregnant' quality to me. You are looking at a space that is lit from the side, out of view... like there is something happening around the corner, but it very much affects you, or will soon. The road leads down from Lake Isabella, California...follows this gorge, and empties you out into the Central Valley and Bakersfield. In another few minutes the mist turns into thick fog, no sunlight at all. Most of the time, the world seems to frown on me... but once in a while?... I get lucky.
The neg i used in the sketch? i used another one for the print, the  stream/water... and the road ( all of which lead 'down and forward') were more evident, contributing to the idea of the flow of time, always forward, onward. 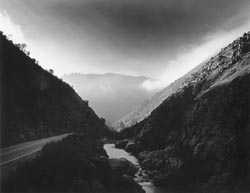 The stone carving is of a naked man holding a skull, with some 'bottles' (presumably 'medicinal') behind/to the right of him. So... he is contemplating what is around the corner? The skull?? Death?

All however many billion of us there are on the planet, we share 2 things: we get born, we get to die, it is inevitable. (This should 'bond' us more than any of our many differences seem to divide us, but it doesn't seem to work out that way.)
So this guy is contemplating... the inevitability of death?

Printing this one brings up something i have noticed many times before that one would normally associate w/ shooting film. There is a thing called 'reciprocity failure' which means that as the light gets really low, it takes much longer of an exposure time than one would figure following the usual rules. I shot architecture for 10 years and one shot that architects love happens at dusk, when the lights in a building or home are on, but the exterior light is much darker, making the subject glow very nicely. Thanks to reciprocity failure, the quality of the color shifts, to otherworldly colors, oranges, reds, etc.

How this applies to this print/anything 'darkroom'?...
I want the figure sculpture to show up, but feel like it is floating in the distance/clouds withOUT the square dark border in the negative. So i burn in the figure thru my standard 'circular hole in black paper' tool, keeping the tool moving all the time. I can see as i am doing the exposures that i actually expose that border in the process of exposing what's right next to it, but the exposure is so weak, and quick, it doesn't show up. A 'reciprocity failure' of sorts. What little of it does, i can finesse/ retouch w/ standard spotting tools.

The order in which I expose the negs is important, it goes like this: landscape first, sky second, and then the figure last, so i can adjust the figure as needed - this is the part that is important to be able to 'exercise flexibility' with. 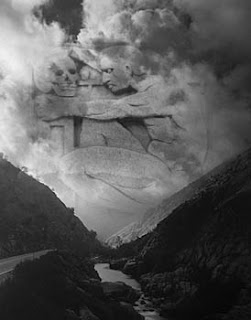 As usual, larger images at a page on my site:

In the 'whatever catches my eye file' this month:

The Slate photoblog = 'Behold'... is excellent:

I'm an old type lover, from way back, so this one definitely caught my eye: 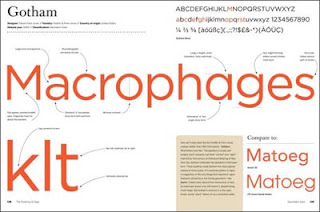 Fonts of Inspiration
A book for the typography nerds we’ve all become. 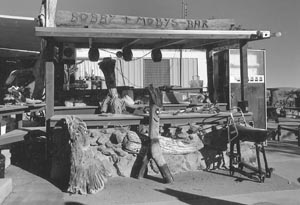 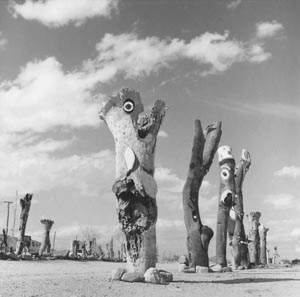 It is now gone, but someone else is doing something similarly marvelous:

Assembly Required: The Desert Cure
Posted in 'The State We're In'

"Shipwrecked", during the Sawtooth Complex Fire, 2006. Photograph by Noah Garcia-Brown.

In 1992 I bought a book, "Secrets from the center of the world" - by Joy Harjo, photos by Steven Strom. It is only 52 pages, 6x7". I don't hang on to much 'stuff', but this is one book I love to be able to pull off the shelf and read from time to time, to center myself in what's become a crazy world. Joy's blog is interesting. Then again, it's sometimes downright searing, for me at least.

"I have tried to write everything in one place, to keep it organized. Like, dreams in this notebook, poems in this one, notes for poems, story notes, play notes. But everything runs wild. And for me, all of these forms overlap. Yet, I find the material from these sources eventually coalesce in ways that I cannot imagine as I am jotting things down."

".... material from these (my various photographic) sources eventually coalesce in ways that I cannot imagine"

Yes, many times i see them in dreams.

Perhaps image making... in fact much creative work, is like 'stone soup'.

"Some travellers come to a village, carrying nothing more than an empty cooking pot. Upon their arrival, the villagers are unwilling to share any of their food stores with the hungry travellers. Then the travellers go to a stream and fill the pot with water, drop a large stone in it, and place it over a fire. One of the villagers becomes curious and asks what they are doing. The travellers answer that they are making "stone soup", which tastes wonderful, although it still needs a little bit of garnish to improve the flavour, which they are missing. The villager does not mind parting with a few carrots to help them out, so that gets added to the soup. Another villager walks by......"

Posted by CaliforniaSilverwizard at 1:02 PM No comments: