Beach Mirage - in the darkroom again

I started w/ just an image in my head, of a figure on the mirrored beach walking into the distance, in search of what? ..i wasn't sure.
It is of course a B&W neg, i shot a whole roll of this view, it was a spectacular occurrence at Ocean Beach, San Francisco. The sand was almost level, at low tide the water didn't recede, it created this glass-like mirrored surface, reflecting the sky. This is a digitally colorized version of one of the frames.

For this montage, i chose another frame w/ just the single figure.

Initially i thought i would burn in some ships moored at a long pier, something like this image, done in 2010: 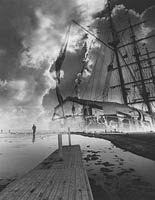 But it felt too much like i was repeating myself, the first test was just muddy... so i went back to old tried and true methods, and sifted thru contact sheets til i came upon some images taken at Marin Headlands, of a figure at the end of a long tunnel, one of the remnants of decades of military installations and gun batteries.
The figure is playing bagpipes, the tunnel echoed the sound mysteriously, incredibly. Which of course doesn't show up in the film at all. 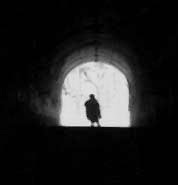 There we go again, i had the 'Aha!' moment.
On the contact sheet, it didn't look like there was much shadow detail, when i worked with it, it turned out there was shadow detail, as it fades into the sky, makes it more interesting, what is this space the figure is walking into? A place of myth or legend? And who is the figure standing out over the ocean?
That's a 'the viewer gets to decide' question. 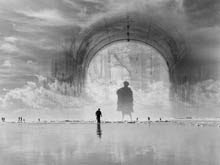 I tried a digital colorization of this one, once again it's.. uh... kinda interesting, but nothing to rave about. There are 4 layers of color adjustments:
1 - a basic Hue/Sat colorize that makes it all seemed toned blue.
2 - a selective color layer that only affects the beach, warming it up a bit, making the blue a bit more cyan - Neutrals/ +cyan, + Yellow.
3 - a selective color layer only affection the opening at the end of the tunnel, warming it up a bit, +y to neutrals.
4 - an overall SC layer, adds a touch more warmth (whites/ +Y). 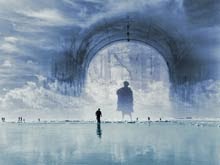 Then i came back and worked on it some more. 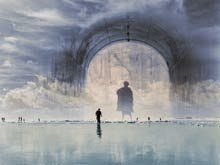 Subtle difference, but it works for me.
Now I can hit 'save' and write it to back-up HD's.
As usual, larger images at a page on my site:

Last but not least, digital photography is now 25 years old.
This is a page well worth your time:

Labels: beach, Black and white darkroom montage, black and white photography, california beach, california coast, darkroom montage, photomontage, photoshop techniques, surrealism
Newer Posts Older Posts Home
Subscribe to: Posts (Atom)
I do both traditional B&W darkroom work (most notably photomontage), and digital work.
So the post topics alternate between the two.
I still feel that I am at my best... in the darkroom.
http://www.bobbennettphoto.net/DarkRm2/index.html