Digital vs Darkroom - The 'Desert Ride' 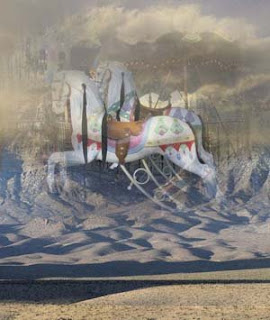 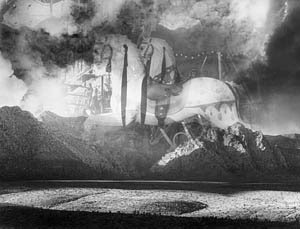 So I did a darkroom (B&W) version of this image...
And recently I did a digital (color) version of roughly the same image.
(Both are above.)
In this case, it was kind of a no-brainer to try a digital version of something 'darkroom' - I had both film and pixels of the same situations, a carousel, and some very nice skies taken in Nevada last December, at the end of the day when the sun was close to sinking behind some mountains - it was a very fast moving situation, and the pixels and film were different - color vs B&W, and 'normal' lense length vs. a very wide Pentax 6x7 55mm lense.


Comparing the two images & techniques seemed definitely worth doing.
It is ALWAYS a good idea to review what you have done in the past.
'Could it be different? Could it be better'? ( whatever 'better' is!..)
"Critique yourself", ya know?
It's a habit you should try out - that was the 'lesson' part of this entry.
No one (but you) will be kinder... and no one could be harsher, it all depends.

When I first worked w/ Photoshop ( V4, in 1992) all you could do montage-wise was "float" a selection, move it around/etc, but you couldn't save any layers ( that capability didn't exist yet), and you had to 'merge all' before you could save anything. And 'saving' anything substansial?... You could go see a movie, have dinner, and when you came back, it might possibly be saved. How times have changed.
My first hard drive, in '97, was all of 1 GB/1000 MB's.
Now?... the chip in my digital camera saves over 4 *Gigabytes*!, and it's about as big as my thumbnail.

Back to the difference between the two images...
To tell ya truth, I like both of them, for different reasons.
I will always like B&W darkroom - the severity it imposes forces you to deal w/ *just* composition, and values...
And film, at least the film I shoot on a Pentax 6x7, is soooo much sharper than anything digital I have seen, there just ain't no comparison, at least not w/ anything that is within my price range, and you could add a '0' to the price? and it still wouldn't compare.
I will never stop loving the process, of seeing a B&W image develop in Dektol, & rocking it slowly back and forth, in the tray...
The burning/dodging I can do takes less than a minute...way easier and faster done than anything digital.

The digital version of this image?.... well, 'color' makes everything different, naturally.
I chose a different foreground, just because I could - I really liked the rolling hills, the way they were lit, and the color they are.
I used a different sky, because it was color - the B&W version wasn't the same, I had no 'equivalent' to work with.
And the color of the land kind of matched the color in the sky (a different relationship - 'color' as opposed to 'design'(B&W))
And the digital version became vertical, as opposed to the darkroom version, horizontal.
Why? it just felt right, it 'worked' - what more reason do ya need?
I always try and stay open to what is going on in the image, no rules, no 'given's.
Kind of like golf - wherever your ball lands? that's where your next swing starts.
Unless you cheat, and who would want to do that?... it destroys the integrity of the game/match!
Same goes for images - 'stay true'... you'll be glad you did...

If you have any interest in Carousels?
Check these links out:

As usual, larger images are at a page on my site, including a download of the digital version at much smaller size, if you want to see how it's done: