Darkroom Binge, starting 12/27, wrapping up on Sun PM 12/29, when my poor aching 62 Y.O. sometimes sciatic back finally said 'enough, dude! leaning over this easel thing is adding up!'

For me, having done darkroom montage for almost 30 years, this is like riding a bike - once you learn you never forget. It used to be i would print every 2 or 3 weeks. Now it's more like once very 5 or 6 months. But the old muscles never die, they are just dormant. And that's what this X-mas/Darkroom break/binge was about, flexing those old muscles, enjoying that even though my hips, knees, and back are in bad shape, some things still work fine.

The prints are different from before, rather quiet and contemplative, nothing loud noisy or complicated.
I have grown tired of the way the world works these days - too much noise, too much 'sound and fury signifying nothing', to quote Shakespeare.
And too much 'photography' that is really not photography, but 'digital imaging'. There IS a difference, if you hadn't noticed. And you should.

'Driftwood Spin' was the first print. Here's the PSD 'sketch' 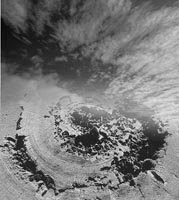 I had done alotta PSD sketches in the past 12 months or so, not sure which would be worth printing. When i pour out the dektol, it's 'shit or go blind' time, make up my mind and just fucking *do it*

So i started w/ a very simple montage, just two elements - an eroded hunk of wood (north coast somewhere), and a spinning sky( Nevada). The eroded patterns in the wood echoed the spinning sky but exactly how they came together?...that was the interesting and most subtle part.
I am now working w/ a box of 8x10" ilford RC glossy, gifted to me by one of those who have given up on analog. There were 2 other boxes of 8x10, i put them all in the frig -  so far, they remain absolutely fine and quite useable. One reason I like RC paper is that you can do a test print, dry it out immediately, slap it back into yer easel, and line up the next exposure w/ total precision. :-)
Niiice!
So that's what I did w/ this one - the way the spinning clouds intersect w/ the wood pattern, that's what's nice about this one, and every little detail counts. I did 3 variations, all a little different.
Here's just one: 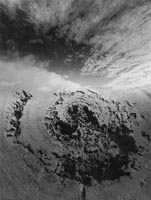 It's a rather quiet subtle image, that's where my head has been at recently.
The world seems full of noise, and noisy people, and celebs tweeitng and twittering, and yakking about... next to nothing. Making headlines that disappear in no time flat. Please, let me the fuck outta here. And you shouldn't be ashamed to show something that is very simple, and ignores the 'you must tweak everything' mindset.

I have started doing some digital embellishment lately - the print is still from film, and darkroom, but I'd be stupid if i didn't see what i could do w/ Photoshop. I'd also be stupid to think that going wacko w/ photoshop was really a good idea. So here's a little PSD experimentation, I am still undecided about their value. 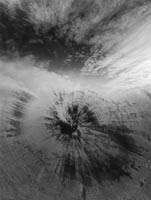 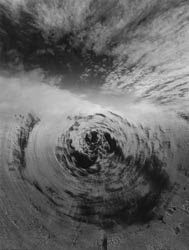 So here's larger image files of all of the above:
www.bobbennettphoto.net/BeachBlog_2014/Driftwood/index.html

The 'whatever catches my eye' file, very fat this time:

Yeah, I know, this blog is 'sposed to be about photography, but photography is about 'seeing' the world and 'making some sense of it' in whatever way... and, well, sometimes I have to stray from this beaten path, to wax philosophical.
Here's two thoughts I would submit to you that are well worth considering:

http://helenlandalf.com/blog/archives/2449
Yes, I write slowly, carefully, didn't ever think there was any other way to do it.

Another few words about this thing called 'creativity'?

If i have any words of wisdom to impart to anyone else, this is what they would be:
Sometimes it's better to just do it in one take. That's how Jimi Hendrix recorded 'the wind cries mary'.
Other times?..keep kicking the can down the road - when you next find it, it may look different, keep turning it over in your mind, it may become some thing special. Keep working on/kicking around any idea you have. "Sleep on it" is excellent advice. Always be ready to improvise.And know the difference between 'doing it now in one take'.. and 'kicking the can down the road'.

Have you ever seen the movie 'One + One' by Jean Luc Godard?
It's one totally strange film, by american movie goers standards. It intersperses film of the Rollig Stones in the studio working on 'sympathy for the devil' w/ bizarre footage of revolutionary diatribe/ ramblings.
The only part I am interested in is The Stones. Mick Jagger brings the bare bones of the song into the studio. It is a slow ballad in 4/4 time(?). After a few back and forths, all of a sudden there is Keith Richards, pounding out a completely different beat, samba style. This kicks the whole song into another dimension, the song we know today as a classic. Add some Nicky Hopkins piano work?
Awesome. One other thing about this track: somewhere along the recording session, Anita Pallenberg began adding a 'woo-hoo' at the end of each bar, hiding somewhere in the studio. Keith picked up on this, so there's footage of a chorus singing it, adding it to the track. This song is a melange (from the french word 'meler' = to mix) of many people's ideas.
To return to the movie title - "One = One"... = ? Do your math on this one. I don't think the answer is '2'.

I totally relate to this one. I went to a most prestigious east coast prep/boarding school from '62- '69. If I were to tell you the last names of the guys i went to school with, you would be amazed - many of them are the pillars of society and culture.
But you know what? Many of them, not very happy w/their lot in life, not at all.

This one deserves waaay more than just a link - it deserves your full and complete attention.
here's an excerpt:

"The giant, or Atlantic, bluefin possesses another extraordinary attribute, one that may prove to be its undoing: Its buttery belly meat, liberally layered with fat, is considered the finest sushi in the world. Over the past decade, a high-tech armada, often guided by spotter planes, has pursued giant bluefin from one end of the Mediterranean to the other, annually netting tens of thousands of fish, many of them illegally. The bluefin are fattened offshore in sea cages before being shot and butchered for the sushi and steak markets in Japan, America, and Europe. So many giant bluefin have been hauled out of the Mediterranean that the population is in danger of collapse. Meanwhile, European and North African officials have done little to stop the slaughter.

"My big fear is that it may be too late," said Sergi Tudela, a Spanish marine biologist with the World Wildlife Fund, which has led the struggle to rein in the bluefin fishery. "I have a very graphic image in my mind. It is of the migration of so many buffalo in the American West in the early 19th century. It was the same with bluefin tuna in the Mediterranean, a migration of a massive number of animals. And now we are witnessing the same phenomenon happening to giant bluefin tuna that we saw happen with America's buffalo. We are witnessing this, right now, right before our eyes."

The decimation of giant bluefin is emblematic of everything wrong with global fisheries today: the vastly increased killing power of new fishing technology, the shadowy network of international companies making huge profits from the trade, negligent fisheries management and enforcement, and consumers' indifference to the fate of the fish they choose to buy.

The world's oceans are a shadow of what they once were."

But it's way too long to add to this blog. You definitely should read it, before you make that tuna cheddar melt sandwich. You just might want to make it a grilled cheese instead.Add some onions and tomato, you'll be glad you did. 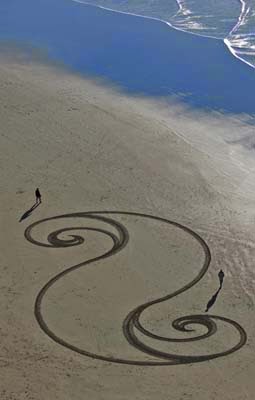 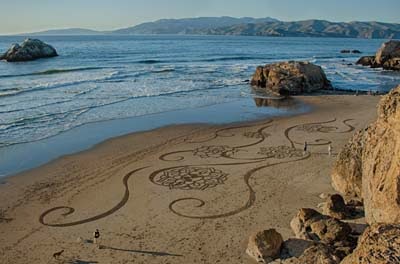 I've photographed this guy's work, and done one interesting darkroom montage print w/ it. The photo @ btm. was taken at Ocean Beach, San Francisco. At the top, the view from Dante's view, Death Valley.


Posted by CaliforniaSilverwizard at 9:18 AM No comments: