'The best way to do something creative..

..is to ask a question you don't know the answer to...'
Francis Ford Coppola, in an interview I read a while ago, I think it was in Time magazine.
I think this is a REALLY good thought...! 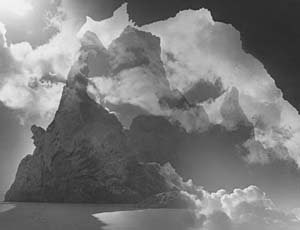 A combination of 'positive' space - the pinnacle of rock on the left..
combined with a jagged opening/negative space, extending from the lower right,
to the left of center at the top.
Both negatives made at the beach in Bandon, Oregon a few years ago.
I figured I would overlay some sky on the top 2/3rd's, and have to find another image to flesh out the bottom right. Guess it was my lucky day, 'cause when I found the right sky for the top, it also had some puffy cumulus clouds that blended right in with the rocks fading in from the bottom left...
and made the 'space' as a whole even more ambiguous.

Where is the horizon here?
At the left, it is defined...
but on the right? ..that's another matter, 'who knows'..

Another thought:
Just because I 'ask a question I don't know the answer to' doesn't mean that when I get an 'answer'
(in the form of an image) that I'll actually understand that, either.
Which is definitely the case, on this one.

As usual, I start w/ 3 or 4 prints, & once I get one that's a keeper of the basic image, I feel free to improvise, and add other elements. In this case, I did 4 - and I got a basic final w/ #2 & 3... so #4 was up in the air....... since this had become such an uncertain place, I decided to add the image of a figure, walking along a narrow strip of rock stretching through ocean waves, and tide pool, that I took at the Sutro Bath House ruins below Cliff House, in S.F.

Once the figure was added, it was no longer just a mysterious space... it was about a 'perilous journey'... 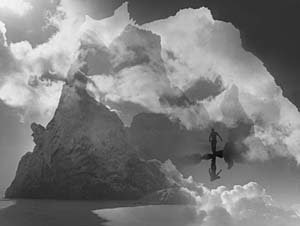 As usual, larger images at:

This is the last post of the year...
and it's been a wild & crazy year hasn't it?
I am reminded again of a song recorded almost 40 years ago by The Rolling Stones, called 'Gimme Shelter'.
It was scary and all too true then, and I wish it would have become less true as the years roll on,
but it hasn't.
That's even more scary.

If you haven't heard this track for a while,
here's a reminder:
http://www.youtube.com/watch?v=LJMnES7WoT4
The Stones, the recorded/studio version, w/ a lot of rather generic photos of the band...
but you can hear it again, in one click, without having to reach for the vinyl, the cassette, or the CD :-)

If you don't have it in any of these forms, well...uh... I respectfully suggest you 'refresh' your music collection.

If there is any other thought I might add to your holiday/year-end ruminations, this is it:
www.bobbennettphoto.net/Xmas2k/index.html

Have a great holiday!!!......see you next year...
Posted by CaliforniaSilverwizard at 6:01 PM No comments: