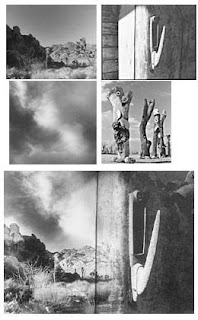 I shot the handle of an abandoned refrigerator (top row, at right) in the town of Bombay Beach, on the Salton Sea, about 8 or 9 years ago. It's a couple of stone's throws away from where Robert Misrach made his rather famous photos of various things sinking into oblivion(water) many years ago.
The only thing that seems to have changed? ..the water has receded even further,
and damn near everything is encrusted w/ salt.
Not a pretty sight, but a pretty arresting sight.

A few links to the Salton Sea:

A handle is, of course, a means of opening a door, however this refrigerator door handle doesn't lead to cold beer, frozen pizza, eggs, cheese, cold cuts & milk ;-)

The landscape (top row, left) was shot a looong time ago, in Joshua Tree N.P. -
there has always been something about this frame that fascinated me, for a long while - I think it's the very long shadow of the hill - this something you just don't/can't.. see back east (where I am originally from) - there's not nearly as much change in elevation... and there are all these things called 'trees' in the way of any view.

I didn't really have any idea where this one was going, and sometimes it's better not to ask, but to just do it...and see where you end up - I knew that the two first exposures would make something interesting, and worth exploring further.
(After 20+ years of doing montage, my instincts are pretty good, I go with them!)

Since the edge of the refrigerator door was a strong vertical that divided the image in half, I held back the top right corner, and burned in just a bit of some rocky landscape, also from Joshua Tree, that echoed the diagonal of the hill in shadow on the left.
Since the dodging on this negative took 2 hands (one for the left side, another for the top right corner), and I have to use one hand to hit the enlarger timer's button for 2 second exposures, (usually 8 or more,) the dodge on the upper right varied more than usual, which is why in one version, it's darker than the others.
(I've thought about getting a foot pedal for my enlarger timer, but since I don't need it 99% of the time?..I never bothered.)
Once I had the these three exposures done, I realized the sky was a bit dull, So I added some nice clouds, that's in the middle row, at left.
& finally started developing the 4 prints, one by one.
After #3, I decided to add something else to the desert space, just a few details of some bizarre homemade sculpture by the roadside, that's in the middle row, at right.


As usual, larger images, including #4 with the sculptures rising into the sky, are on a page at my site:
www.bobbennettphoto.net/BeachBlog_DkRm_11_08/Handle.html

Next couple of entries are gonna be a lot more digital... see ya' in 2 weeks :-)
Posted by CaliforniaSilverwizard at 5:01 PM No comments: