Have you ever been to Nevada?

A good friend of mine calls it "the land of poker and whores".
i couldn't possibly care less about either of them...
and perhaps his comment is a little off the mark? -
an astounding 86% of Nevada is either BLM land, or US military facilities,
so it couldn't be more than 14% 'poker & whores', could it?
That's still a lot of poker, and enough whores to... well...
let's not even go there at all, OK?
(I like to keep this blog PG rated :-) )

Up until a few weeks ago, I had only been there twice before.
Once in the early 80's, while I was still living in the Wash DC area and was shooting architecture, I was hired by the Brick Institute of America, to go to Sparks (outside Reno) to photograph a fire station (made of brick, of course).
I had built in a 'weather contingency' to the budget, which was a good idea, cause it was rather cloudy for a day or so upon arrival. So I drove out of town, up into the hills, and the land caught my imagination, something fierce.

My second visit to Nevada was 'just barely there' -
I was visiting Death Valley, and cruised up to Rhyolite,
a ghost town that is just barely in Nevada.

I haven't taken a good ol' fashioned 'photo/road trip' in 4 years -
health problems and 'financial adjustments' have kept me close to home.
But this Xmas?.... the aforementioned problems are under control...
or at least, I chose to ignore them - sometimes that's a good plan - "ignore reality!".
I'm sure you've tried it, probably with varying degrees of success.
I was tired of spending my life in front of a computer...
and the economy could use a few more people spending money, couldn't it?
Sooo... What the hell! Let's do it!
I hit the road, destination Las Vegas (people also call it 'Sin City', or 'Lost Wages'), intending to take in Red Rock Canyon,
and Valley of Fire, for as long as my increasingly lame & arthritic hips, legs,
and ankles could take.

How can anyone capsulize and condense all the thoughts and impressions that pass thru the mind during any kind of travel experience?
I won't even try to write about it, let's just cut to the chase, and get to some pictures.
They may not be 'worth a thousand words'... but they say much more than I can.
The first image is some bizarre storm clouds, shot at sunset outside Valley of Fire.
The second one, a petroglyph along the trail to Calico tanks in Red Rock Canyon.
The third is Valley of Fire. 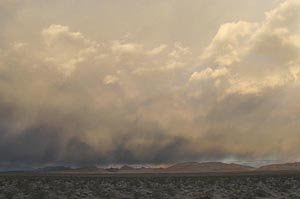 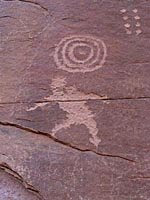 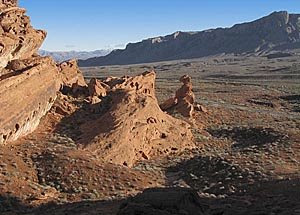 For many more photos & some comments:

For more info on the places visited:

The state of Nevada:
http://en.wikipedia.org/wiki/Nevada