On comments to the blog....

Yeah, I know I wrote that the previous entry would be the last of the year, but I received a comment made about a print I did on New Year's day 2010, and figured it was perfect for N.Y. Eve, a year later.
Oh, and also some interesting & timely ('year's end') 'whatever catches my eye' file things:

Op-Ed Columnist - NY Times
Thinking of Aretha - Published: December 24, 2010 - By Bob Herbert
http://www.nytimes.com/2010/12/25/opinion/25herbert.html?hp
"Nineteen sixty-seven was a tough year in many respects — riots, protests, an unwinnable war — but I can’t think of it without thinking of the glory of Aretha Franklin, a woman in her mid-20s, introverted and somewhat shy, who sang soul and rock ’n’ roll with the power and beauty of a heavenly choir....
So a toast or a prayer for Aretha this holiday season would be terrific — just a moment of appreciation and a wish that she continue recovering nicely."
-----------------------------
2010: The Year in Pictures
Bearing Witness
Published: December 23, 2010
by Michael Kamber
TWENTY-FIVE years ago, Joao Silva was a troubled high school dropout on the streets of Johannesburg. His future looked bleak until the day a friend took him along on a photo shoot. Joao fell in love with the camera.
http://www.nytimes.com/2010/12/26/weekinreview/26kamber.html?hp
--------------------------
The NY Times: The 10th annual year in ideas:
http://www.nytimes.com/interactive/2010/12/19/magazine/ideas2010.html?ref=magazine#-1
For the 10th consecutive December, the magazine has chosen to look back on the past year through a distinctive prism: ideas.
Our digest of short entries refracts the light beam of human inspiration, breaking it up into its constituent colors — innovations and insights from a spectrum of fields, including economics, biology, engineering, medicine, literature, sports, music and, of course, raw-meat clothing. Happy thinking!

Personally, I really like that they do this splash page w/ typography! Well done!!! Herb Lubalin is happy!!!
What? You don't know who Herb Lubalin was??? Well, it's damn well time you found out!

---------------------------------
RIP, Richard Holbrooke, a giant among men, who took on challenges that would make most others cringe... and run.
http://www.nytimes.com/interactive/2010/12/26/magazine/2010lives.html?ref=magazine#view=richard_c__holbrooke
"Holbrooke devoted his life to public service, a notion that is now derided in many quarters. Some say his death marks the end of a Kennedy-­inspired generation — and an America — that believed it could be a virtuous force in the world. I fervently disagree.
All of us have the chance to follow his example." 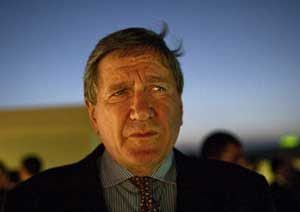 The photo shows a guy who is not looking at the camera, and probably not interested in his picture.
He is looking off, somewhere else, perhaps to the next big problem to solve...?
We need more people who think like he did, and 'march into the fire', and do some good things.
"All of us have a chance to follow his example" in some small way....?, by doing what we do best, to the max.
Let those be words to live by.
---------------------------------------------------
Yosemite National Park, in winter's grip
No voices, no crowds. Just Times photographer Mark Boster, a few fearless wild animals and a host of winter-in-Yosemite memories.
The skies behind majestic Half Dome in Yosemite National Park take an eerie glow as the sun sets on another beautiful winter's day. (Mark Boster/Los Angeles Times) 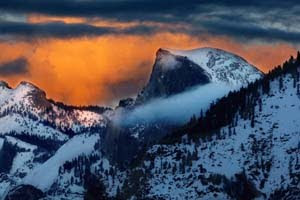 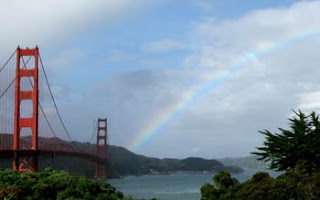 And yes, the weather is treating California bad these days, but the storms do have their good moments. Above, the Golden Gate bridge
last Sunday the 26th. Yep, there's a pot of gold in the bay, not far from the north end of the bridge.
In 50 degree water, with treacherous tidal flows. Guess it'll have to stay there, untouched...

On to the comments:
I've gotten a few that are interesting, among the many Viagra URL's, and breast enlargement possibilities... these spammers spare NO one, do they? I mean spamming comments on a blog?? Please, get outta here!
From a few months ago:
'Anonymous' has left a new comment on your post:
In my "Shadows - Darkroom Print" posted 2/28-ish I included a quote you should commit to memory:
"Failure is an option, fear is not..." James Cameron

The comment: "In it something is. Thanks for an explanation. All ingenious is simple."

Yes, all 'ingenious' is many times simple (maybe it just looks simple?)... but it takes a lot of work to get there - a bit of a paradox isn't it?

"E=mc squared" is pretty simple, and explains a lot...but getting to that statement, you've got to be (an) Einstein = ingenious!

I have a saying I made up just for myself, many years ago, before photoshop, to get a handle on 'special effects', it goes like this...
"There are no rabbits! (that can be pulled out of a hat)" = it's a matter of using the available tools, VERY smartly... and..uh..ingeniously.
That's how special effects were done before computers.

I guess now that there's photoshop, you don't have to plan that way, you can 'fix it all later'... an attitude I hate.
It breeds 'sloppy'! of which I have seen a lot in recent years.
Anyway, thanks for the comment, and... take James Cameron's advice. 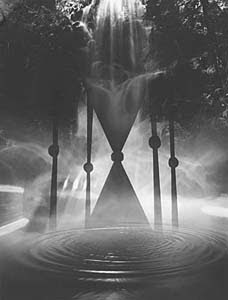 I ended the post by wondering out loud about what the image meant:

I got no problem w/ publishing comments of any kind or opposing points of view, giving them their own post no less, as long as they are on topic, and polite/intelligent.
Whatever it was in the post that 'anonymous' didn't agree with? ( what this image might 'mean'?)...Sure, bring it on!

"Hi there, Thanks for sharing the link - but unfortunately it seems to be down? Does anybody here at californiasilverwizard.blogspot.com have a mirror or another source?
Thanks,
John"

Dear John (what a great way to start any letter/note!),
I don't know what you're talking about - there's only one link in this post, to a page in my website, and it works just fine.
For any future comments? Please read the instructions in the right hand column, about how I much prefer comments be sent to me directly, at my yahoo.com email, and about not being anonymous, After all, if you are 'anonymous' I can't reply ( other than doing a post like this) can I? And I'm only gonna do a few (and far between) like these....

Warren Zevon - back in the high life again
http://www.youtube.com/watch?v=Mo3lxKrjABE&feature=related

Happy New Year!!
Posted by CaliforniaSilverwizard at 12:25 PM No comments: