I've been doing darkroom/film montage for 3+ decades, i've developed a sixth sense for what i shoot on film, and a similar gut-level compass for finding the right two or three negs to weave together.
For the last few weeks, i've been wallowing in digital montage, color pix & symmetry, i stopped and wondered - "i am losing my B and W bearings?".
So one Sat. AM i opened up a neg i'd made in Joshua Tree, and looked for it's 'companion', it didn't take long for one neg to step up to the plate, volunteer, and fit right in, nicely. It's sort of a sandwich in that the lower layer is 'normal' but the next layer up is on 'screen'. Yes, there are blending masks going on. 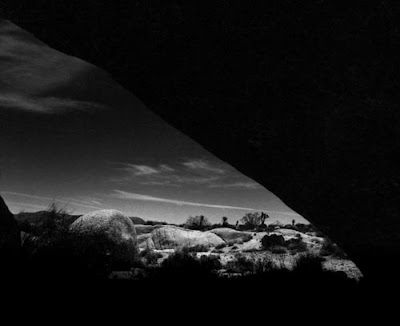 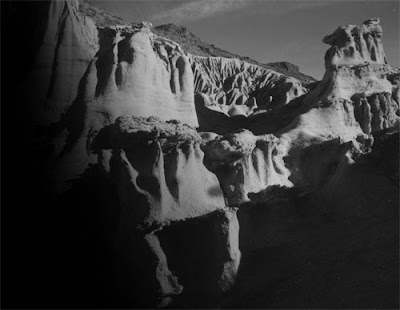 And here is the montage, it feels a whole lot like my analog darkroom work! 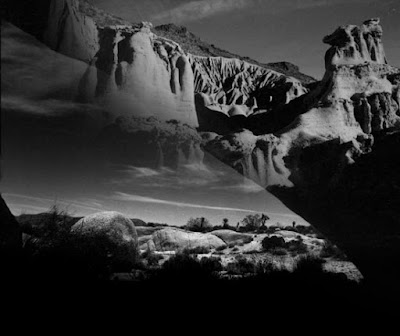 Making this confirmed my faith that some skills ( photomontage among them) are like riding a bike - once you learn, you never forget. Old muscles may be dormant, but only that - "dormant" - waiting to be used.
And those instincts lead me to make images that have some marvelous details - in this one, the rock formations at the top blend into the clouds on the bottom neg, most 'serendipitously' - if that is a word Webster's would accept. 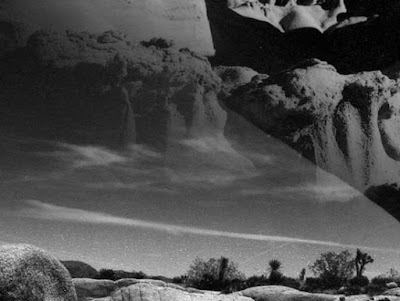 Here's a screen shot of the PSD file: 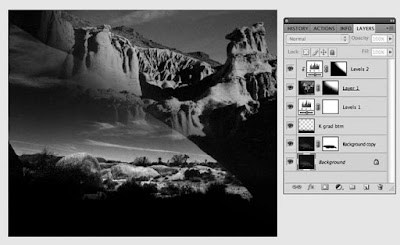 This blog software won't show this at the size i loaded - if you'd like a larger view? - click on it, drag and drop it to your desktop, open that in a browser.

Several rules you should observe while building come thing like this:
• start at the bottom (obviously!) and add a layer at a time, don't change the order, that will affect the effect - yes, i am wording that correctly.
• good idea = to double click on the layer title, name it appropriately. I don't always follow my own rules if the layer palette tells me all i need to know.
* Third rule - TAKE YOUR TIME! Save... and return again, later.

----------------------
Finally, to tackle the big question 'what does it mean?'.....
Sometimes i have something resembling an answer, sometimes not. I don't like to try too hard on that one, it either happens or not.
There is a lot of tension in this one - at the bottom you are looking out from a cave, from under an overhang, of sorts. At the top you are looking up, at towering eroded cliffs. Maybe there isn't a simple answer, but something more complicated - a question - can radically different points of view coexist?
There is one spot in the center where the two images flow together.
And maybe that's what this means - there can be some unity, some confluence amidst the turbulence, the contrasts, the antagonisms of images, and landscapes before us.

Posted by CaliforniaSilverwizard at 11:45 PM No comments:

Labels: black and white photography, california desert, darkroom montage, digital photomontage, photomontage, photoshop techniques, surreal photomontage, surrealism
Newer Posts Older Posts Home
Subscribe to: Posts (Atom)
I do both traditional B&W darkroom work (most notably photomontage), and digital work.
So the post topics alternate between the two.
I still feel that I am at my best... in the darkroom.
http://www.bobbennettphoto.net/DarkRm2/index.html