I've had a number of comments submitted, over the course of this blog.
I am not real good at dealing w/ all the "in's and out's of the 'blogsphere", or 'moderating' these comments in any way.
Perhaps showing up to say "thanks!" for the comments, will suffice? I hope so.
I will continue to attempt to write something intelligent, come hell or high water.
I do this in large part, because of the excellent teachers I had many years ago, at Northern Virginia Community College. They 'passed it on' and i would be relinquent not to do the same. Joyce Tennyson, Anne Salley, Bob Capps, Frank DiPerna, Tom Devlin and Michael Platt?? I love all of you, I hope i am 'continuing on' as you would wish. I've always loved the 'path' you set me on, no regrets, ever!
Thank you!!!
Posted by CaliforniaSilverwizard at 7:18 PM No comments:

But first, from the 'whatever catches my eye' file, this one:

It's 18 minutes long, worth every second of it. Most of you reading this are in the developed '1st world countries' - we have no idea what goes on elsewhere, but we should. This kinda makes me feel guilty, that all i can do is make pictures.

Editor's note: TED is a nonprofit organization devoted to "Ideas worth spreading," which it makes available through talks posted on its website. Author Sheryl WuDunn spoke at the TED Global conference in July in Oxford, England.
(CNN) -- Discrimination against women and girls takes a staggering toll around the world, says author Sheryl WuDunn. It leads to as many as 100 million fewer females than males in the world.
Ending the oppression of women is the great moral challenge of the 21st Century, a cause she compares to fighting slavery in the 19th century and totalitarianism in the 20th Century.
------------------------------
I don't think I should have to mention the recent Time magazine cover image, of the afghan girl w/ no nose, cut off by Taliban lunatics, but I will anyway.
A very excellent decision, to publish this. If it makes you gasp...?! ...maybe it will also make you think, and feel, a few things you didn't before?
GOOD!!! That was the point, wasn't it?
Thank you, Thank you, Thank you, Time magazine editorial/photo editing staff!!
Do this more often! You have the 'bully pulpit' - use it, to good ends!!!
------------------------
Now for a bit of hopefully interesting, but i must admit, compared to the above, rather inconsequential images.
I don't get into the darkroom nearly as much as I did 10 or 15 years ago.
Goddamned computer is why, I guess.
And when I do, sometimes I am 'on'... and sometimes not. Getting a bit rusty, but when everything goes right, it's marvelous, this was one of those good days.
I started by working on an image that came from a neg. taken right after the key neg. in 'Edge of town'.
(http://www.bobbennettphoto.net/art/edge.fp.html)
Here's one of the photoshop sketches that got it started, below. 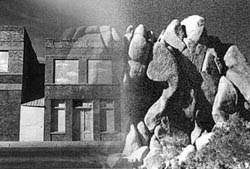 It is an abandoned building facade, and in contrast to the 'edge of town' neg, it was dead on, no angling off to one side. This imposes some limitations, in that whatever it blends into must also seem similarly 'dead on', or at least I have to deal with this, somehow. I found an image taken in Joshua Tree that fit the bill, and once I did a photoshop sketch of the two together, I noticed something happening - a big shadow in the JT rocks, kind of like an ear. It seemed like something had to be going into, or coming out of this dark shadow ear. Wherever you go in the desert, no matter how remote it seems, there's always a crow.

Aha!.......So i found some birds ( actually they were gulls shot at Ocean Beach in SF, but in silhouette, who can tell the difference?)... and that's what i wanted to have coming out of the 'dark shadow ear'.
10 or 15 years ago, Ilford made an RC version of it's matte surface B&W paper, which I liked alot. The matte surface was excellent for handcoloring, and being RC, I could dry a test strip out in a few minutes, tape it to the easel in register, and build a really good 'preview' of how things were coming together. This paper is history, can't do that anymore, so now I go w/ Ilfords Matte surface Fiber paper (which doesn't dry so fast, can't dry it out, tape it down in register, like the RC paper.)....I think making the prints on fiber is the way to go, and because I love that matte surface - it scans well, and I can hand-color it if I want to.
(I have found that photo paper w/ any surface texture is a bad choice for scanning - that surface texture (pearl, luster, whatever it's called) shows up in the scan, and is impossible to get rid of. but mybe that's just because of the scanners I have at my disposal.)

And I have devised a different mode of working - I make more prints than I did before, so I can develop one or two that are 'unfinished' (but many times quite useable), to see how the image is shaping up. You can see the progression (much larger) at the usual 'at my site' link, below.

A few words about my various dodging tools, if you haven't clicked on the link in the right hand column to my 'darkroom methods' pages. Many years ago I devised a 'below the lense' filter and dodging tray... 'contraption'.
I simply add a strip or piece ( or multiple pieces, as the case may be) of black construction paper, positioned as I wish/need into the 'tray'.
Very improvised and "Rube Goldberg'-ish, but it definitely gets the job done. I can accomplish some simple dodging, and still have two hands free to do more dodging or burning.
I also set my exposure meter to 2 or 3 second intervals, and decide on a total length, and also on number of exposures for dodging/burning.
That way I can keep track of them easier, and can also switch tools when necessary.
For instance... 4 'hits'( I am 'hitting' the button, so that's what I call them.. as opposed to other kind of 'hits' ;-) ) of full exposure, plus 3 more hits dodging out this, plus 3 more hits burning in that...you get the idea, break things down into manageable chunks.)
Here's the tools: 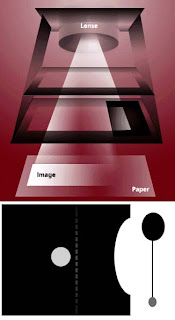 Pretty simple, hunh? The dotted line is where i fold this over, so it becomes the simple/'straight edge' tool.
Bill Gates? Adobe? Steve Jobs? Don't even think about stealing these radical and cutting edge tools/ideas! I have lawyers that will make pit bulls look like pussycats! Patents are pending, I've already shopped Caribbean islands for sale, mine will be next to Johnny Depp's!! ;-) 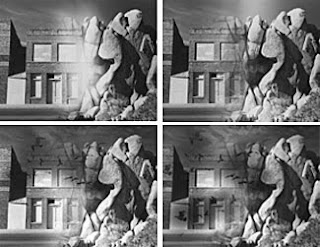 Once I was happy w/ the way the building and the rocks were coming togther (50/50 combination of a straight right to left dodge, and a curved/oval dodge tool) I added the birds. I suppose one would think I would make a hardline/litho neg to burn these avian rascsals in. I'm too lazy for that, it's excess/one time use toxic chemistry, which the planet doesn't want, ...and besides it's not necessary. I use the tried and true 'black card w/ a circular hole' and burn in what I want, and I use the 'below the lense' tray to blend out any hard edges. If I expose some background, the exposure is so fast and soft it just doesn't show up much, there's no 'hard edge', things just blend together.
Are you familiar w/ the term 'reciprocity failure'? It explains some things that happen w/ film, when light levels are really low, and your light meter is basically 'lying to you' (the reciprocal relationship between shutter speed and f-stop breaks down) and you need to expose longer to compensate for the much lower light level.
Same thing works in the B&W darkroom, for the exposure of the birds.
The very slight and very short exposure of the background tone just barely shows up. The birds, a bit darker, definitely do... which is what i wanted.
No mask necessary.

So here's the progression, Prints 1 - 4, much larger:
www.bobbennettphoto.net/BeachBlog_2010/EdgeOfTown2/index.html

Next time round? the second part of this darkroom session, a mysterious place in the desert, the view from a hiding place, a shadow........
Posted by CaliforniaSilverwizard at 6:34 PM No comments: