Another sandwich - two negs aligned together in the neg carrier. Just one exposure.
Coming up with these is really difficult, i don't know where this came from, i went thru all my 'psd sketches' folders, couldn't find a thing. Oh, well / c'est la vie.
The thing about sandwiches that seems to work for me? Something distant contrasting against something close up. Plenty of tension and contrast going on, it makes the image interesting / arresting.
The landscape is Nevada which is mostly the most barren desolate high desert you could ever encounter.
The fortune wheel is an old-timey amusement, before TV or anything digital. 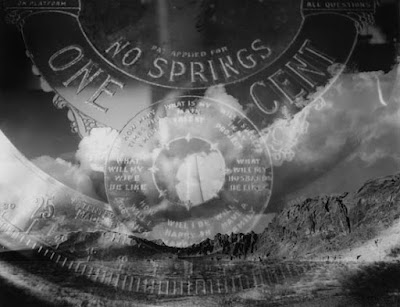 This one screamed 'handcolor me!'... so i did, just watercolors, no subsequent oils. Then i did some icing on the cake w/ Photoshop, levels, & Hue/Sat layer. 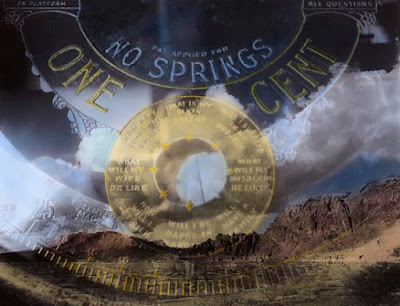 In the whatever catches my eye file this month?

"......for most of its history, cinema was medium-specific — it was shot, processed and distributed on film. The movies we watch today, by contrast, are rarely made through mechanical and photochemical processes, but with computer code, with strings of zeros and ones: bits. Each medium has its advantages, although for many lovers of film the crucial difference is its vivid, alive look."

'Ah'll be back' to quote Ah-nold, the terminator

Posted by CaliforniaSilverwizard at 6:21 PM No comments:

Labels: Black and white darkroom montage, black and white photography, california desert, darkroom montage, hand coloring, surreal photomontage
Newer Posts Older Posts Home
Subscribe to: Posts (Atom)
I do both traditional B&W darkroom work (most notably photomontage), and digital work.
So the post topics alternate between the two.
I still feel that I am at my best... in the darkroom.
http://www.bobbennettphoto.net/DarkRm2/index.html