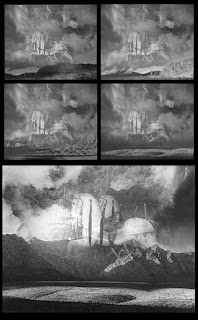 Fog at the coast (summer is here, already?!) just didn't clear out...
so it was a darkroom weekend.
Which was OK, hadn't done any printing except for one session, since taking in a whole lot of new stuff in Nevada. Still trying to sift thru the new stuff... and integrating it into all the existing stuff... that'll take a while, for sure...
But I definitely had some new things that were ripe for printing.
(If you haven't already checked out my 'darkroom techniques' pages, I suggest you check 'em out, the link is in the column to the right.
It occurred to me that if you are not familiar w/ some of the techniques, this all might leave you wondering "Whaaa???",
and that's definitely not my intention. If you have questions?..please by all means, feel free to ask.
It's: bobbennettphoto@yahoo.com - 'operators are standing by' ;-)

I did four Photoshop sketches of this one....( w/ different foregrounds), they are above.
the one that really caught my attention was one that used a landscape I shot at the end of the day, looking north from a turn-out near Red Rock Canyon, NV., lower right.
(sometimes you don't have to walk far off the beaten path to get a good shot - my knees and hips like that, a lot...:-)
Hey, what can I say but "57 y.o." and feelin' it, all the time! ...but don't get out a shovel, anytime soon, OK?)
I am finding this process of doing 'sketches' in Photoshop to very helpful, but I still feel nothing replaces doing the actual print the old fashioned way.
Why did I choose that one?
For one thing I really liked the strip of directly lit land, w/ shadow in front and behind it. There was also a lot more interesting detail in the mountains beyond than the other frames.
The lighting in the other landscapes implies direct side lighting in the sky, but the carousel horse is softly/indirectly lit - the two don't match up very well. The image hangs together better when the carousel horse feels like it's being lit by the glow on the land in front of it... that's why I chose it.

One thing I noticed as soon as i made a test print of the foreground?
I've seen a number of 'fine art photo prints' lately, the source images being digital, that are very nice, and 'tasteful' and all.... but none of them are very sharp. Sorry, but I have a problem w/ that - and why shouldn't I?
Digital cameras seem to make sharpness the last thing on their agenda.

This negative is just totally tack sharp, on Joshua trees that probably a mile away(?)...
and also on the mountainous rocks beyond, that are probably 2 miles away.
(Pentax 6x7, 55mm lense,Yellow filter, Ilford FP4 souped in Rodinal, 1:50, it doesn't get any better than that.
Unless Agfa rose from the dead, & resumed making it's 100 ASA B&W film, which will definitely not happen.)

And, if you want some icing on the cake? this is hand-held, no tripod.
I tossed that away 15 years ago. Did a decade of 4x5 view camera architectural photography, on a tripod - been there, done that... enough, already!

First I exposed the bottom/foreground... then I added the sky, much lighter in the center than around the edges, then I blew in the carousel horse, from the center, out - adjusting each of 3 ( or was it 4?) prints each time - the position, & the exposure.
The final print ( one of them, anyway) is at the bottom of the images above.

As usual, many more & larger images on a page at my site: