First, from the 'whatever catches my eye' file:
So we are some 15+ years into the effects of this thing called the internet/web... and where has it gotten us?
I would refer you an article in a recent Atlantic Monthly article:

"Daniel Patrick Moynihan famously said (or is famously reputed to have said)
..."we may each be entitled to our own set of opinions, but we are not entitled to our own set of facts."
Yes, indeed.
But facts and opinions seem to be seriously muddled these days - it's hard to tell which is which!
Once Sarah Palin gets on the podium?.... forget about facts, this is opinion, and BS opinion at that.

Now, on to some photography 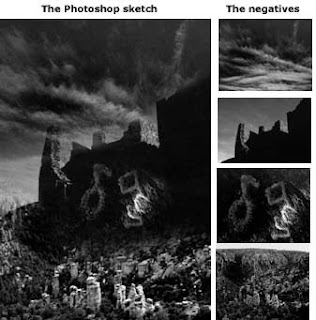 It started with the Native American ruins shot, which was a bit more underexposed than I expected, but that turned out to be fine. (I never carry or use a light meter - I did architectural photography for 10 years, I've got a pretty good eye for the exposure, and with B&W, you a good bit of flexibility. And if I screw it up? oh well, c'est la vie!)
So if all i had was the hi-lites? that's OK. I kinda like having shadows that are close to clear film base - that means I can dodge that shadow out smoothly, with very little detail, and burn in something else overlapping into the shadow and not have conflicting textures.
Soooo what could I do with the bottom of this image, below the ruins?...
Hhmmm..... I came across this very enigmatic petroglyph, found in Joshua Tree.
A lot of petroglyphs, at least you can make some sense of them, they represent something (people, animals, etc) in some relatively clear way.
These glyphs?...... are an enigma.
I think they are older than many of the others I have encountered/photographed, and less easily 'interpreted/understood'. They are just 'symbols' of some kind. What's amazing to me is that someone, a long long time ago, made some considerable effort to 'speak'... to someone, anyone, who might come across this. In hopes of...communicating....what exactly?
I 'hear him speaking'... but I guess I don't understand. That would be asking a lot.
I feel humble and stupid. I am sure someone, way back when, was trying to SAY.. something.
And these are in a most unique location - in the hollowed portion of a stone about 12 ft tall. Whenever I am in Joshua Tree, I look at the many rock formations, and ask to no one in particular - 'How does it get like to be that(what forces created this?)??'.
( If you follow the link at the end of the post to my site, there's an opportunity to see more of the glyph rock, and some 'How does it get like to be that?' views of Joshua Tree.)

Anyway, back to the image...
To just blow in the 'glyph below the ruins wasn't spooky enough for me, I had somethin' going on, though.
So I came upon a shot made at Chircahua, in SE Arizona, that added yet another spatial twist to things - the ruins are probably 30 feet wide, the glyph is about a foot wide, and the Chiracahua landscape is probably, oh, several hundred yards wide.
This played with the sense of size and space very nicely, that is to say, you look at it, and can't resolve the sizing!
Is the glyph that huge?... Where the hell am I?? what kind of place is this??

The sky above the building ruins was pretty unremarkable... so time to blow in something better, more interesting.
I have loads of nice B&W skies... :-)
So, four negatives got into the act on this one.
There are 3 slightly varying prints (it was the sky (last exposure) that was the variation), and as usual,
larger images, and more darkroom info is at a page at my site:

Have a good Thanksgiving holiday, if you are in the US - may your turkey stuffing be at least half as good as my mom's was!
Posted by CaliforniaSilverwizard at 11:43 AM No comments: