So what happened to the digital part of this blog?

Seems like the digital part got lost, you say? Yes, it definitely has been somewhat 'lost' .. What can I say?..not that inspired.. I've been working for many months on some 60+ digital files that are.... nice, interesting... but nothing sizzles the way darkroom does for me. But in the last few weeks, I went back over them again, and there emerged a few that I managed to find the icing to put on the cake, so to speak. Could I find more 'icing' for the cake?...perhaps.

Why We Travel
“Don’t go there,” the know-it-all, stay-at-home finger wagger says of many a distant place. I have heard it my whole traveling life, and in almost every case it was bad advice.
By PAUL THEROUX
Published: April 1, 2011
http://travel.nytimes.com/2011/04/03/travel/03Cover.html
--------------------------------------
A Guide to Entice Heads Into the Clouds
Gavin Pretor-Pinney confronts his new book’s major problem right up front. “You might well think,” he writes, “that cloud collecting sounds like a ridiculous idea.”
“The Cloud Collector’s Handbook,” published by Chronicle Books, is a serious yet charming field guide to clouds.

http://www.nytimes.com/2011/03/29/science/29clouds.html?_r=1
Published: March 28, 2011
By Cornelia Dean
-----------------------------------------
Several interesting articles about the new media in The Atlantic Monthly, April 2011:
Learning to Love the (Shallow, Divisive, Unreliable) New Media
By James Fallows
"Everyone from President Obama to Ted Koppel is bemoaning a decline in journalistic substance, seriousness, and sense of proportion. But the author, a longtime advocate of these values, takes a journey through the digital-media world and concludes there isn’t any point in defending the old ways. Consumer-obsessed, sensationalist, and passionate about their work, digital upstarts are undermining the old media—and they may also be pointing the way to a brighter future."
"We have created a technolgy that has wonderful potential, but increases our ability to lie to ourselves and forget it is a lie."
http://www.theatlantic.com/magazine/archive/2011/04/learning-to-love-the-shallow-divisive-unreliable-new-media/8415/
------------------------------------------------
A Vaster Wasteland
"Fifty years after his landmark speech declaring television programming a 'vast wasteland', the author surveys the reshaped media landscape and lays out a plan to keep television and the Internet vibrant, democratic forces for the next half century."
By Newton N. Minow
http://www.theatlantic.com/magazine/archive/2011/04/a-vaster-wasteland/8418/
--------------------------------
Suit over purported Ansel Adams negatives settled
SAN FRANCISCO – A California man has agreed not to use Ansel Adams' name to sell posters and other merchandise connected to dozens of glass negatives he bought at a garage sale and claimed were the renowned nature photographer's work.
"I want to share this work with as many people as possible," he said in a statement. "I think that the public will appreciate these stunning images."
http://news.yahoo.com/s/ap/20110315/ap_on_re_us/us_ansel_adams_lost_work
Glad to see this has been resolved, highly in favor of AA's trust.
I don't think the images are stunning, I think Mr. Rick Norsigian is full of it, and should be relegated to obscurity.

---------------------------------
SF residents learn to coexist with urban coyotes
Wildlife researchers estimate that about a dozen coyotes live in San Francisco, with the first sighting in decades reported in 2001 in the Presidio, a federal park and residential neighborhood located on the city's northern tip.
The coyotes' ability to adapt to life in the country's second-most densely populated major city has intrigued experts and provoked even far-fetched theories about how they came to set up residence in a city surrounded by water on three sides.
http://news.yahoo.com/s/ap/20110313/ap_on_re_us/us_san_francisco_urban_coyotes
'It's about time' on this one, quit calling coyotes villains.
All they want to do is eat, and they are not interested in messing w/ humans.
A great comment to this article:
"I keep finding these empty boxes from Acme Products.....Flying suit, complete with cape?....Rocket-powered shoes?....Giant rubber band?"

Yep, it's wiley coyote and the roadrunner!

Ain't that the truth!!

All Hail ... Analog?
When it comes to the quality of photos and music, the digital revolution may be failing us.

Onward, to those digital montage images. Even though they might be... uh... 'failing us'...

I am always working on themes that I started on a long time ago.

I think everyone has some themes of one sort or another that they keep working on. Here's a darkroom print from 17+ years ago, that got one particular theme started:

But I do find myself wandering off this beaten track, as you can see below... 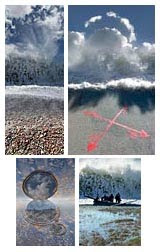 Here's 10 of my latest digital montage efforts, you can see the images and download a small PSD file to see how they work, at:
www.bobbennettphoto.net/BeachBlog_2011/WorkingOnThemes/index.html

Next entry, definitely darkroom :-)
Posted by CaliforniaSilverwizard at 11:41 AM 2 comments: