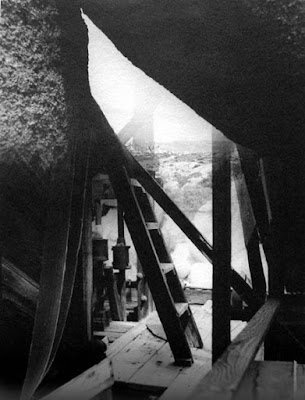 This is one of the last two prints i will make in the darkroom - old age, in the form of a bad back (sciatica! Yeeoowch!) - has gotten the better of me, just can't bend over those trays or the enlarger easel and grain focuser.

There are two reasons why i am entranced by this print:

#1 - it goes to show something i have believed for a long time - montage isn't about lots of fancy darkroom tricks, at least not for me. It's about having the right negs, and finding/choosing them from amongst the thousands i have... and then composing very, very carefully. And then printing/exposing negs with some amount of care, but w/ some variation, improvisation. As an old song lyric goes 'hold on loosely, but don't let go'. Sometimes a mistake is a mistake, sometimes it's a blessing in disguise. Figuring out which is which, now that's the hard part.

The top part of this one is simply two monster sculpted rocky orbs w/ a space between them in Joshua Tree. The place is full of impossible jumbles of rock formations. 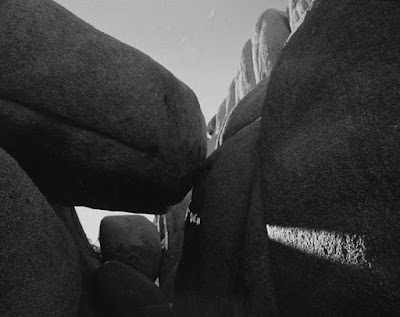 The frame at bottom right, some machinery at the Wall St. Mill: 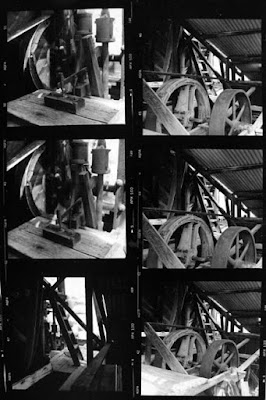 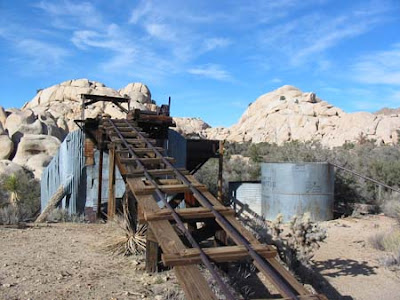 The legacy of one William Keys, this was his ranch: 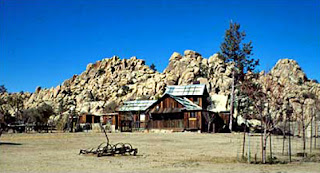 And one notation of his handiwork, the place was lawless. 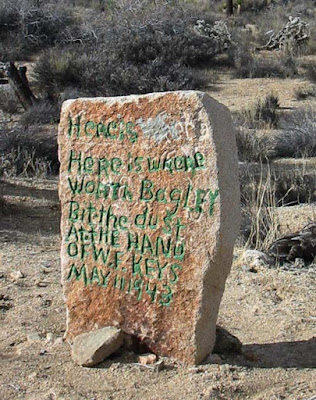 Another thing? ...they didn't have triple A out here in the early 40's. 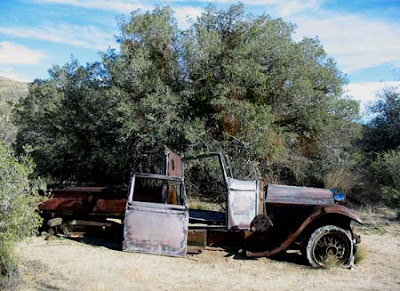 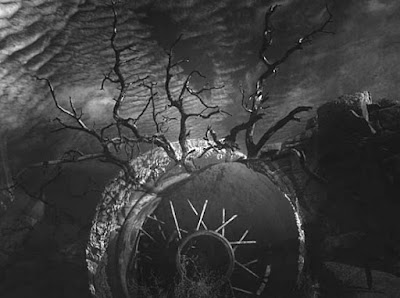 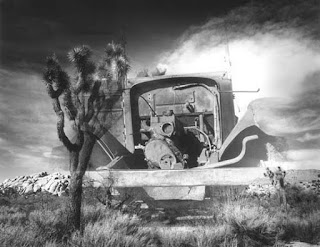 #2 - This is the perfect image to end my darkroom work with - the stairs lead up.. and disappear into... the rocks? ..the space between them? Will i find myself between a rock and a hard place, going digital w/ my montage??

The answer is ...NO! Since the aborted-on-account-of-sciatica darkroom session, i have done over a hundred new images. Yeah, i know, my old photog. friends are saying 'what took ya so long, dummy-dude?'.
I really like the limitations darkroom imposes, they make you 'shit or go blind'. Good training. And as I've been saying for decades 'it's the most fun you can have with your clothes on'.

I took a stab at digitally coloring this one, w/ mixed results: 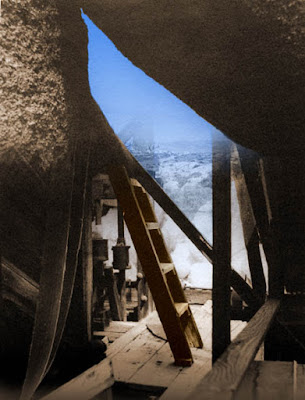 Digital coloring has a 'fake' quality to it sometimes, this is a good example. 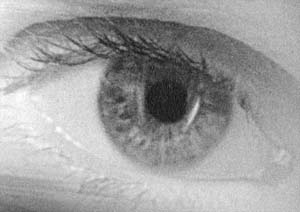 In the occasional 'whatever catches my eye' file, as i cruise towards my 66th B'day, this one sure did:

What Happens to Creativity as We Age?

There's a lyric in a Jefferson Airplane (?) song, Grace Slick sings it:
'You're only as pretty as you feel'.

You're only as old as you feel, too.

Posted by CaliforniaSilverwizard at 11:37 AM No comments:

Labels: Black and white darkroom montage, black and white photography, california desert, darkroom photomontage, rock formation, surreal photomontage, surrealism
Newer Posts Older Posts Home
Subscribe to: Posts (Atom)
I do both traditional B&W darkroom work (most notably photomontage), and digital work.
So the post topics alternate between the two.
I still feel that I am at my best... in the darkroom.
http://www.bobbennettphoto.net/DarkRm2/index.html