Darkroom again: A place for thinking - sit down, stay for a while.

'A seat for thought' 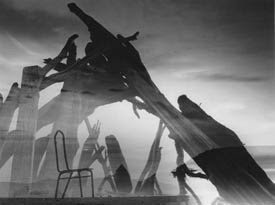 Most of the image is a sandwich of two negs taken somewhere along the CA. North Coast many years ago.
First one: I've used the driftwood 'hut' a few times. It was taken at Patrick's Pt. S.P. along a beach that also has agate: 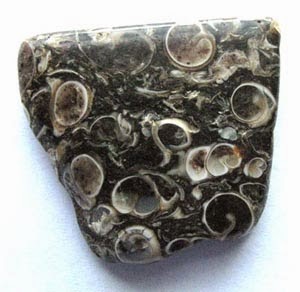 ...and many other driftwood 'sculptures' of some kind. 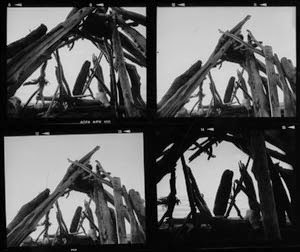 One of the things about many Ca. beaches? There's not much control of any kind, people can do whatever they will, and leave it for others. It's a nice thing to do, and a most pleasant sight to see...most of the time.
Here's something else i found on the same beach: 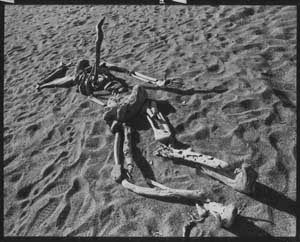 Here's the second neg of the sandwich, a long view, taken from a state sponsored overlook parking lot, at the coastline at sunset: 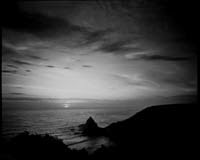 I remember this one for one big reason. It was a large parking lot, i was the only one there, for a while. Then an old school bus pulled in, parked at the far end of the lot. I could see lights go on inside, and then some human legs, and dog legs, on the far side of the bus, and then those disappeared, the lights in the bus dimmed.
I did *not* go introduce myself, but i got the drift.
There are people here who live totally off the grid, away from you, me, and anyone else.
I don't know what else there is to say about them, i don't know them much, except to say... they live in our world literally, but in another way they live in their own world.

I shot about a roll of each situation, the driftwood, and the sunset coastline, glad I did - i had enough variations to come up w/ one sandwich that clicked. 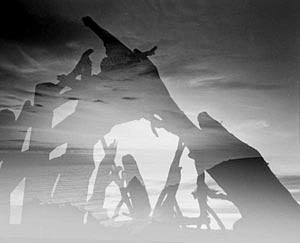 And a lonely chair that gets added at the bottom: 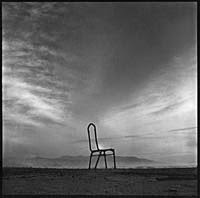 Here's a second final print, i added a bit of clouds to the center: 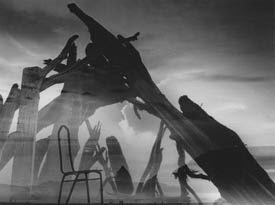 Technically? this one is easy, the sandwich gets dodged some at the bottom, and the chair gets dodged a lot at the top a whole lot, about like this. 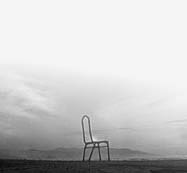 One thing I've said over and over and yet over again in this blog is: It's not about fancy tricks, it's about shooting the right negs, and linking them together = composition. Without that, you just don't have two sticks to rub together do you?
It may be a little hard to see at web resolution, but the way the sandwich works is rather interesting, things line up. The seastack in the center blends right into the vertical driftwood in the center, the coast line on the right blends in and out of the wood hut in an interesting way. 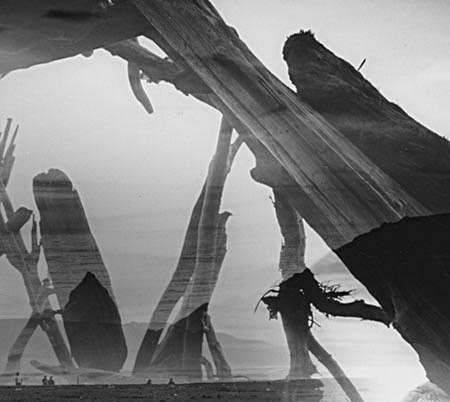 One thing i noticed after i made this print was that the chair and the driftwood come from very different worlds.
The chair is a cheapo 'the caterer brought it to your wedding or event' kinda thing.
The driftwood? ...Carefully made by someone who knew something about design, sculpture...*balance* - and had another way of looking at the world.
I managed to put them together, juxtaposed, in the same image. So what does that say, if anything?

Can we sit down casually, and stay a while... and take in greater thoughts and talk 'secrets'?

Not likely in this day and age, turn yer *bleepin* cell phone off.....why not give it a try?

In the 'whatever catches my eye' file this month:

Arizona city finds out what happens when Internet goes out

http://www.nytimes.com/2015/02/22/books/review/helen-macdonalds-h-is-for-hawk.html?ref=review
"...grace resides in the most unlikely places — and that moving forward means leaving some things behind."

As the Terminator said most famously: 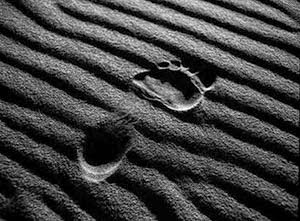 Posted by CaliforniaSilverwizard at 6:05 PM No comments:

Labels: beach, Black and white darkroom montage, black and white photography, california beach, california coast, darkroom montage, photomontage, surrealism
Newer Posts Older Posts Home
Subscribe to: Posts (Atom)
I do both traditional B&W darkroom work (most notably photomontage), and digital work.
So the post topics alternate between the two.
I still feel that I am at my best... in the darkroom.
http://www.bobbennettphoto.net/DarkRm2/index.html