This was one that was done on a wing and a prayer, for sure.
And it is another example of improvising, and adding to whatever you've already got going on, in the dark box w/ exposures already done. I like working that way - it's challenging and a bit dangerous.
At first i was not much impressed w/ this print, but i have warmed to it, mostly because of it's improvisational character/process.

It started w/ a sandwich of two negs done within minutes of each other at Jack London Historical State Park in No. CA. ( It's a place you should visit, if you're in the vicinity or passing thru. It's the place Jack built, marvelously, and remains attended and restored excellently, see link at bottom of post for more.)
This oak tree is one of the hugest and most impressive i have ever seen. This was taken about as far back from the tree as i could get, w/ a Pentax 6x7 55mm lense which sucks in an enormous field of vision. 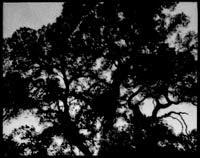 Below: a note tacked to a window pane at Jack's house faces away from me, i flopped the neg., so the writing would be legible. It's hard to see that's what it is at this size - go to the page at my site, the link at the end of the post.

I made 4 prints of this, developed only one to see what was going on.
Put the other 3 back in the dark box, for further work.
The sandwich was very interesting, i definitely wanted to pursue this one, so i added the figure that i had made many years ago for a magazine illustration:

(This was done in 1992 or 1993, not sure which. I was way ahead of photoshop, but eventually photoshop eclipsed me. I no longer do any darkroom montage illustrations for hire/on assignment.)
It's a lith neg of my figure, i sandwiched some 'stars' i made many years ago, as the writers dreaming, imagination, inspiration. 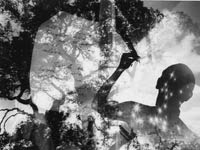 Looked nice, but needed some icing on the cake to finish it off.
For the last print, i moved the writer down a bit, so the quill pen he is holding is more visible.
So i added some birds flying - they represent.... the writers imagination? thoughts?
The ideas he is chasing?I think that's it - 'the ideas he is chasing'.

I also took a stab at coloring this digitally:

An interesting expriment, at best.

As always, larger images, a few more comments on a page at my site:

For a few shots of Jack's place:
www.bobbennettphoto.net/BeachBlog_2014/Writer/JackLondonSP/index.html

I didn't plan very well - there are tours of the house, but only on certain days.
The one i visited wasn't one of them.

I spent 5 days in the darkroom over the holidays, did 7 new images - 2 sandwiches, and 5 montage, very much fun, nice work if i don't say so myself!
Here's one: 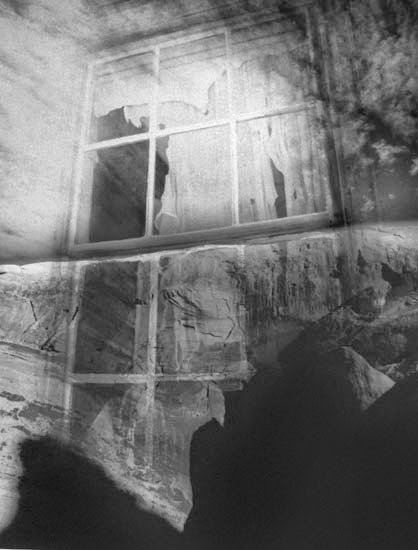 Posted by CaliforniaSilverwizard at 1:26 PM No comments:

Labels: Black and white darkroom montage, black and white photography, california coast, photomontage, surrealism
Newer Posts Older Posts Home
Subscribe to: Posts (Atom)
I do both traditional B&W darkroom work (most notably photomontage), and digital work.
So the post topics alternate between the two.
I still feel that I am at my best... in the darkroom.
http://www.bobbennettphoto.net/DarkRm2/index.html