I have gone back to 'simple' in recent years ( that's quite a discussion, just by itself, in this photoshopped world). Here's the photoshop sketch (a very simple image) for this entry: 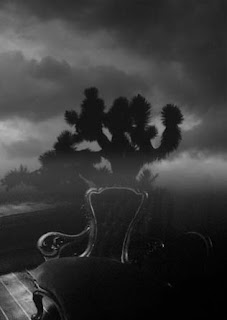 Traveling Light in a Time of Digital Thievery
By NICOLE PERLROTH
Published: February 10, 2012

SAN FRANCISCO — When Kenneth G. Lieberthal, a China expert at the Brookings Institution, travels to that country, he follows a routine that seems straight from a spy film.
He leaves his cellphone and laptop at home and instead brings “loaner” devices, which he erases before he leaves the United States and wipes clean the minute he returns. In China, he disables Bluetooth and Wi-Fi, never lets his phone out of his sight and, in meetings, not only turns off his phone but also removes the battery, for fear his microphone could be turned on remotely. He connects to the Internet only through an encrypted, password-protected channel, and copies and pastes his password from a USB thumb drive. He never types in a password directly, because, he said, “the Chinese are very good at installing key-logging software on your laptop.” 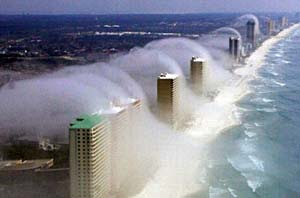 Fog occurs when the relative humidity reaches near 100 percent, which is achieved by either adding moisture to the air or dropping the temperature of the surrounding air. Fog can be dense or thin, and it can form suddenly and dissipate just as rapidly, making for unique photographic images if your timing is right. Thanks to the people at Panhandle Helicopters in Panama City Beach, Fla., we are able to share some stunning images of “tsunami clouds” rolling over a row of condos on Florida’s coast.

Slab City: Living Off the Grid in California's Badlands 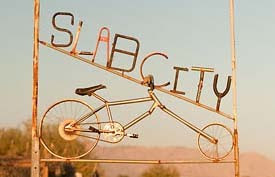 Dolphins Reported Talking Whale in Their Sleep
News has come from France that some captive-born dolphins there have been recorded “talking in their sleep” — and talking in Whale, no less, not Dolphinese.
The scientists involved say this would be the first time that dolphins have been recorded mimicking sounds a significant period of time after hearing them. 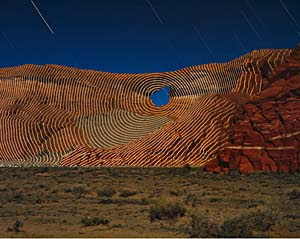 Saturday, Jan 28, 2012 9:00 AM PST
Postcards from the dawn of photography
Glimpse 19th-century ghosts through the lenses of pioneering photo artists -- including Lewis Carroll

Once Hidden by Forest, Carvings in Land Attest to Amazon’s Lost World
By SIMON ROMERO
Published: January 14, 2012
RIO BRANCO, Brazil — Edmar Araújo still remembers the awe.
As he cleared trees on his family’s land decades ago near Rio Branco, an outpost in the far western reaches of the Brazilian Amazon, a series of deep earthen avenues carved into the soil came into focus.
“These lines were too perfect not to have been made by man,” said Mr. Araújo, a 62-year-old cattleman. “The only explanation I had was that they must have been trenches for the war against the Bolivians.”But these were no foxholes, at least not for any conflict waged here at the dawn of the 20th century. According to stunning archaeological discoveries here in recent years, the earthworks on Mr. Araújo’s land and hundreds like them nearby are much, much older — potentially upending the conventional understanding of the world’s largest tropical rain forest.

On to photography & darkroom montage, preceded by a quasi-rant.
I guess it's not quite a rant cause it's not breathing fire, it's just a some uh.. 'challenging discussion of the state of the art'.
And the 'art'?.. is this photography?... or is it all computer generated imagery?... and where do you draw the line?

One thing about all the new digital imagery, I guess you can do most anything when you drag your film into 'digital-land'. I've seen plenty of that, in all the photo magazines. Ya know what? I am not interested.
My question would be... can you do anything cool ( no, not 'cool', excuse me - that's a really lame description that can be applied to most anything - how about 'arresting, interesting, thought provoking'?) w/ OUT all this digital stuff??
I suspect many people would feel like they were fighting w/ one arm tied behind their back, or like maybe they had brought a knife to a gun fight. Personally, i like the limitations. Amid all this digital stuff, 'simple' is ... refreshingly honest, for both viewer and creator.

It's not like this kind of reversion is a new thing. In late 1967 the Rolling Stones released 'Their Satanic Majesties Request', which was a bit psychedelic, and definitely not their style. Psychedelia was taking over, and i guess they just had to take it for a spin. The album was panned. They noticed.
In December 1968 they released 'Beggars Banquet'.... one of their best, most enduring collections. Alot of acoustic guitar, very blues based. They definitely went back to their roots, and have stayed there.
So i guess i am in good company on this one.

As for the 'image du jour'?..... sometimes I shoot negatives that would make you laugh, they are so thin, w/ so much clear film base (black!), they are soooo far from proper/correct exposures. Though I did architectural photography for 10 years ( '81 - '91) and metered everything scrupulously, once i gave that up, i tossed my light meter in the trash - I was never much for following directions anyway......

( Warren Zevon: "One day i came to a fork in the road, folks, i just couldn't do what i was told"
http://www.youtube.com/watch?v=DtkJU8_GlPQ )

This one was done w/ negs like that. They work for me, that's all i care about.
This also works well for my montage - if there were shadow detail in both negs, when i blend them together, those details would overlap confusingly. With no shadow detail? ..the black just all blends together, no 'interference'.
And on this one, the blending/dodging between the top and bottom is VERY tight - ya gotta do it 'just right', or it doesn't work.

The chair ('throne') was shot in one of the very well preserved/restored ships at the SF Maritime Museum, not far from Fisherman's Wharf, in SF. Shot at a 30th or 15th of a second - aperture?...wiiiiide open!.
The Joshua Tree with the stormy sky was shot at Red Rock Canyon, just east of 'Vegas, Xmas 2008.
There's no shadow detail in that neg either, which makes it easier to blend the two together with no shadow detail getting in the way. Don't know how or why this one came together, it has something to do w/ major darkness, and there being some light somewhere, a silver lining perhaps?

As usual, larger images:
www.bobbennettphoto.net/BeachBlog_2012/CrownofThorns/index.html
Posted by CaliforniaSilverwizard at 6:40 PM No comments: