The image du jour? This one: 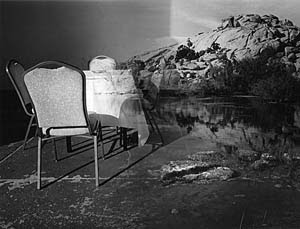 But first, as usual, the 'whatever catches my eye' file, FAT! this time 'round! What a crazy and interesting world!

Photos: Elusive Snow Leopards Thrive in Surprising Spot
Thanks to the vigilant eye of camera traps stationed high in Afghanistan's remote northeast mountains, researchers have uncovered exciting news: A population of endangered snow leopards, one of the most elusive big cats on the planet, is thriving in the region.

Hendrix’s electric guitar is visceral. It is somatic in Whitman’s sense — the song of itself — and emphatically American. Hendrix’s guitar is immediately recognizable in the way speaking voices of loved ones are immediately familiar. It taught me that a sound, in and of itself, can embody a feeling and that there is a meaning that can only be expressed with that sound, that voice, that guitar playing in that unique way. It also taught me, by extension, to look for my own voice, my identity, in sounds. Yes, rather than putting on a uniform, or trying to fit in with people around me. To not only embrace my idiosyncrasies, but to amplify them.

------------------ Uh...yes, Jimi Hendrix speaks to most everyone, and ANYone.....
only 3 or 4 years he recorded his own music.... his influence resounds, waaaay beyond the few short years he lived. You can't pick up an electric guitar, without feeling, and playing, his influence.
Dig this: All along the watchtower
http://www.youtube.com/watch?v=AIhtafqZvy8

So today i prayed to God..and said:
"If you give us Jimi Hendrix and Bob Marley back will give you justin bieber and the jonas brothers."
Well God replied and said, "No, i like good music too."
Dig this:
Third stone from the sun:
http://www.youtube.com/watch?v=EUg7xl4kKUw&feature=related
Wanna talk about 'cutting the world a new asshole'? this track definitely did that.
But one thing should be noted: Jimi couldn't have done this without Mitch Mitchell's drumming, no two ways about it.
He was quoted as saying 'he's my Elvin Jones' - enuf said.
If you don't know Elvin Jones??? It's about time you did:
http://www.youtube.com/watch?v=0YVOd1hK0_w

Southern California Moments
A daily look at scenes from the Southland captured by Times readers.
http://www.latimes.com/features/socalmoments/
-----------------------

Offbeat Traveler: Sand-sculpting contests
This summer, relive those days when you were a kid at the beach building sand castles. Besides sun and vacation time, this season offers sand-sculpting festivals and contests geared to novices and pros. You wouldn't believe what people make out of sand.

To see the masters compete, head to the Revere Beach National Sand Sculpting Festival in Massachusetts. If you're more interested in the fun, check out the Long Beach Sand Sculpture Contest, where you can build sand castles, eat BBQ and listen to live music.

Opinionator - exclusive Online commentary from the NY Times
June 12, 2011, 5:35 pm
Philosophy As an Art of Dying
By Costica Bradatan

It happens rarely, but when it does it causes a commotion of great proportions; it attracts the attention of all, becomes a popular topic for discussion and debate in marketplaces and taverns. It drives people to take sides, quarrel and fight, which for things philosophical is quite remarkable. It happened to Socrates, Hypatia, Thomas More, Giordano Bruno, Jan Patočka, and a few others. Due to an irrevocable death sentence, imminent mob execution or torture to death, these philosophers found themselves in the most paradoxical of situations: lovers of logic and rational argumentation, silenced by brute force; professional makers of discourses, banned from using the word; masters of debate and contradiction, able to argue no more. What was left of these philosophers then? Just their silence, their sheer physical presence. The only means of expression left to them, their own bodies — and dying bodies at that...

Deer dropped by eagle knocks out power in Montana
"It's a first-time thing," Northwestern spokeswoman Michelle Sullivan said. "A deer dangling on the line, that's never happened before."

What was most amusing was the comments many people made...a couple of the best?

'I guess the eagle wanted to barbecue his lunch, hunh?'

'Now only if an eagle would pick up a piglett. We all know the saying....'

Sometimes when you're drifting off to sleep, do all kinds of oddly connected thoughts and images drift thru your brain? If they don't, I'm sorry for ya. It happens to me often, that's how this one came about.
During the week between Xmas and new year's (2010-2011), I was hoping for some decent weather, and wanted to go check out SF's Ocean Beach & the renovated Cliff House.
http://www.cliffhouse.com/
(Don't skip the intro, that's the best part. The rest of it is just a promo for the new Cliff House. Snore.)

In the ten years I lived in SF ('92- '02), I went there ALL the time, it was 20 minutes and only 1$ bus fare away. But I haven't been there much since I moved to Marin County.. it was about time to check out an old haunt. So one night while drifting off, before intending to visit the next day, I played back in my mind many of the shots I had taken there, and when I got to this table, set up for some kind of party on the viewing deck behind Cliff House, I hit "Pause"! 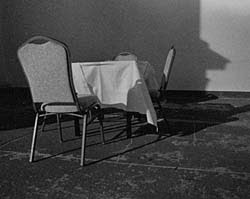 I think lot of the reason I shoot the the things I do is that they have a certain sort of 'pregnancy'.. that is to say there is a certain emptiness, incompleteness.. that is begging for more.
This table sure fits the bill, doesn't it?

Hhmmm... this is one for the very simple, just 2 negatives 'side to side' blend, with the other side being 'completely different'. An empty table is awaiting some guests ... but their view won't be on the menu. Barker Dam Lake in Joshua Tree (above) is about as removed from fine dining as a place can be, but it's a feast for the eyes, and the camera. So that became the right side of the image. The fun part is positioning and dodging and burning a bit differently for each print, and hoping for serendipity as they melt into each other.
Took me all 4 sheets I started with to 'hit it', but eventually, i got it.
Here's the photoshop sketch: 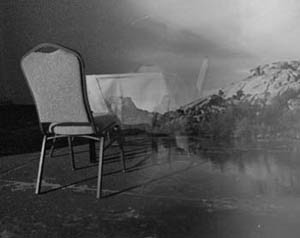 And one of the final prints:

(I ended up going to Ocean Beach on Wednesday 12/29, the first clear day of the week, and it was brutally windy, i had trouble just standing up... and the new Cliff House wasn't nearly as photogenically funky as the old one. Had you noticed that sometimes progress sucks?)

For all of the 4 prints:
(The ones that succeed, and the ones that aren't quite 'there'...)