How 'bout some mo' Digital?

Gotta keep blowing my own horn for a while about my book.
Here's a preview:
http://www.blurb.com/books/5470637-a-walk-on-the-california-coast
Or take a look at the B&W montage images done 16 yrs ago that are the foundation for the booK:
www.californiabeachtrip.com

Time for some more digital. I am still having fun with symmetry, let's look at two of those. But I also have an occasional montage that's not symmetrical, we'll check that out too.

First the symmetry.
I took a walk along a road that follows a bay in San Rafael into a neighborhood I had not visited before, it had a completely different feel from the downtown area I usually spend my time. There were lots of very nice houses on the waterfront, with some colorful exotic plants next to the sidewalk, and many marine/boating businesses. Climbing up the hills are various funky places, to my eastern sensibilities, very amusing, lots of character. It's been 22 years since i moved here, i am still getting used to it, and enjoying the surprises of 'west coast' style.

I'm not usually one for flowers, but I do really like succulents, palms, other plants that I never saw on the east coast, where i spent my first 40 years.
So here's how one image came about, I started w/ a simple shot of a flower: 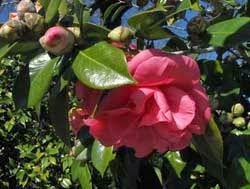 I cropped it with the idea that the leaf at top left would be at the center...

... and duplicated that 3 times to come up with this 'kaleidiscope' image. 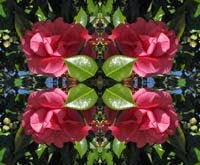 It could use another layer of something... i chose a succulent, but used a cropped version to fill 2 quadrants of the image, flopped that to cover the other two. Set that layer at less than 100% transparency...  Then added a sunburst in the center. 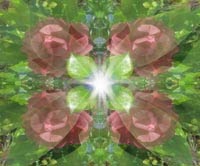 Second one was a bit more complicated, but it's more of the same thing. 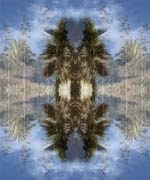 I suggest you go to the page at my website at the bottom of the post to get all the down and dirty details. I like to keep these posts a bit lean so that anyone can read easily no matter how slow their web connection is, and if you want to explore further, you can, but it's optional, I don't want to clog your browser.

Funny how intuition and that 'sixth sense' can work. I visited a place called China Camp, east of San Rafael proper, juts out into the bay. It's a state park that has been fitfully maintained, the camp the Chinese made is poorly kept up. But being Chinese? it survives in spite of all..... I took a few frames.
One of the pier from inside a building, the other of sunlit hi-lites on the water through openings in the building wall. Yes, a star-cross filter got into the act on that one, i just held it in front of the lense.  I sandwiched just two frames, on a whim. They *flew*. I like that. I think perhaps what this montage says is.. there is 'light at the end of the tunnel'. Find it, it's there.

As always, larger images at a page on my website:

The 'whatever catches my eye' file has been lean lately, but this one is worth it:

(My browser had trouble w/ both the pages below - web designers are getting too full of themselves, too fancy, and the code they write sometimes goes awry. i hope you can get to the meat of this w/ out too much BS. As a copywriter i used to work with just outside Wash. DC would say about his parties in Baltimore - 'it's worth the schlep'. Some things are. Yup.)

this one is pretty good too, a dedicated darkroom dude:
http://laurentgirard.blogspot.com/

I'll be back in a month w/ some darkroom, unless i am dead.

Posted by CaliforniaSilverwizard at 10:24 AM No comments:

Labels: california coast, digital photography, digital photomontage, photoshop techniques, surrealism, symmetry
Newer Posts Older Posts Home
Subscribe to: Posts (Atom)
I do both traditional B&W darkroom work (most notably photomontage), and digital work.
So the post topics alternate between the two.
I still feel that I am at my best... in the darkroom.
http://www.bobbennettphoto.net/DarkRm2/index.html