I promised that the next entry/ first of the year would be about a 'desert(ed) heart' and I always keep my word, so here it is.
B-b-but only after a brief pause for consideration of some recent comments!

The first was a 'thank you' for my post about hand-coloring
(6/14/09 - "Hand-coloring B&W photo prints - a dying art?")
I seem to have encouraged at least one person to give it a try.
Thanks for writing! Hope your work goes well!
One reason why I write (besides trying to explain myself to myself, not an easy task...)
is that many years ago, I had some really good teachers who really gave of themselves (and babbled on endlessly, and most informatively, in a time (1974, 75) when teachers were not nearly as scrutinized and constricted as it seems they are now. These days, their behavior might get them into a lot of hot water!)
They inspired me, and I've read Keith Richards say (in reference to his his hanging out w/ Jack White, who is a third his age)
"you've got to pass it on" - which we all definitely should do.

So I try, as best I can. Film seems to be disappearing, fast... and the art of dealing w/ it is sinking like a stone.
Obviously, I hate that. If film disappears in my lifetime?...
maybe I should buy a one-way ticket to Paraguay, and be done with it all.

Or... maybe I should take Bob Seger's advice! -
(Going to Katmandu!)
http://www.youtube.com/watch?v=wd3Mt8JBBBg

The other comment was:
"Your blog keeps getting better and better! Your older articles are not as good as newer ones you have a lot more creativity and originality now keep it up!"

Why, thank you!! And I thought next to no one was reading!
I'll try to remain interesting and informative :-)
I've never tried writing before, but once I did, well, it was kinda like the horse got outta the barn, and was impossible to catch up with.
To tell ya the truth? I didn't even try to track it down!
Let it be 'free range', ya know?

And now, to the image, Desert(ed) heart'. 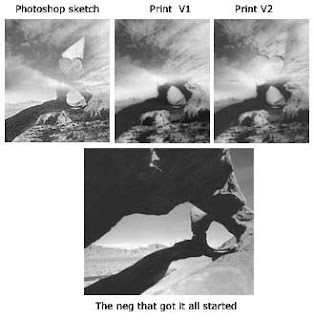 The landscapes were shot in 'Valley of Fire', in Nevada.
The sky was shot just outside Mojave CA, heading east towards Las Vegas.
The 'heart' is part of a larger sign, I shot in Tehechapi, CA, on a very cold afternoon...
Sooo cold that the Pentax 6x7 batteries were close to 'giving it up'.

In this case, working w/ the photoshop 'sketch' really helped, & 'illuminated the path' to the final print.
My initial inspiration came from the bizarre rock formation - the oval at the far right end is probably big enough to shove a basketball thru, but not much wider.
The distance to that oval from the camera, maybe 5, 6 feet, and the horizontal opening starting at the left is maybe 18-24" high - it was a bitch to squeeze in here to get this angle, without including my own shadow on the foreground.
My idea? replace the sunlit/foreground part of the rock with a much larger landscape, I mean 1/2 a mile, or a mile wide, let's say.
That changes the perceived size of the rock immensely - now the holes in it are gargantuan.
(This makes the Arches Nat'l Monument in Utah seem puny!)

Nice start, I think to myself... what next?
Well, since many of my montages include landscapes, when in doubt about what to do with the top of any image, I add a sky.
I happened to come upon one from earlier in this trip to Nevada that once I flopped it, was a continuation of one of the sides of the opening at the end, heading off diagonally to the left.

"Bingo!" I thought - this is sort of my photographic equivalent to pulling the arm of a one-armed bandit gambling machine, and getting 3 hearts, or 3 cherries in a row.
I developed 1 of the 3 sheets of paper I was working on, to see how it looked.
Answer? Niiiice!
(This is print V1 above)

This leaves a sky 'without much going on... waiting for more'....
But just by itself, it's rather interesting - is the sky 'turning into'(in some kind of space-warp) the rocks below?...
or are the rocks turning into the sky?....
(which comes first, the chicken, or the egg?.... good luck figuring that one out.)

The shape of the hole is not a perfect oval... in fact it's...uh.. kinda heart shaped isn't it? ( the addition of the sky emphasizies this 'line', so to speak.
And I remembered I have something that relates to that, a derelict sign in Tehechapi....!!
It's kind of a 'mirror' of the shape below.
So I added that, and now I had more than '3 cherries in a row', I needed a bag for quarters spilling outta the gambling machine!
So you can see how building this image came a step at a time, adding something & reacting... adding something else & reacting...

Why didn't I do this entirely digitally, w/ photoshop?
I just really like the darkroom, I feel like I can accomplish a whole lot more there, in an hour or so, than I can do digitally in twice or three times the time.
And I still feel like the darkroom is the most fun I can have with my clothes on, and without taking serious hallucinogens... which I haven't done in many years.
(But I wouldn't be averse to trying some, if I was relatively sure it was clean, and well made :-) )
And there's something about the darkroom that just kicks my brain into it's best gear, and things happen and work out better than anything digital.

For larger images, a page at my website:
http://www.bobbennettphoto.net/BeachBlog_2010/DesertHeart/

Next up, in a couple of weeks?
"Am I giving away my secrets?"
Well, yeah.... sort of ...this will be a bit darkroom, and a bit digital.
If you do any digital printing?... you may find this one particularly interesting.
Posted by CaliforniaSilverwizard at 1:22 PM No comments: