A tent is a temporary shelter, I didn't know what event this was set up for, but it is obviously temporary. 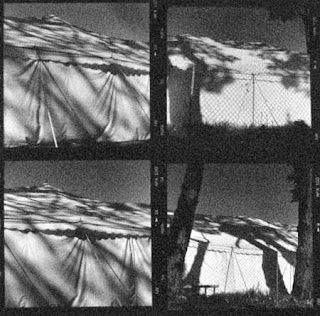 A tent of some sort i shot somewhere in the Presidio in SF, dodged out the top and burned in a sky, with a line of clouds at the bottom that corresponded to the beginning of the top of the tent. Here's my crude photoshop sketch. 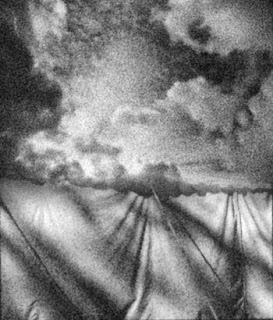 This is one where dodging/burning in *just the right way* is really important. Did three prints, all a bit different. Can't decide which is best. Did them all in less than 2 hrs.
In the sketch, you can't see the top of the pole that holds the rope, but for the print I decided to keep it. Don't know why, it just felt right, there needed to be that 'anchor' of sorts. 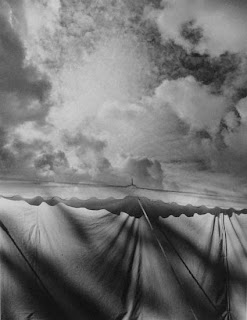 I guess this one asks a question - we erect shelters of various sorts, but how long-standing are they, any of them?
The sky? Why do i call that 'temporary'? Because it obviously is - sit down, cast your gaze up and watch it morph from moment to moment. At least it does where I live near the California coast where weather is constantly moving in from over the ocean.
Ah, but the sky is a shelter too. On the splash image header on my western skies blog:

......the text reads "we are protected by a thin skin of atmosphere that shields us from who knows what radiation/etc, and transports moisture, and produces rain around the globe - without it? we would be toast, like Mars.
And you've probably seen the images beamed back from NASA's great vehicle on Mars. The Mojave is most considerable hospitable compared to this. For one thing, it's got a (breathable for humans) atmosphere.
The sky is perhaps a much more important shelter than whatever we build will ever be.

I read somewhere that at 20 % oxygen? ...nothing would burn.
So much for cooking much of anything. 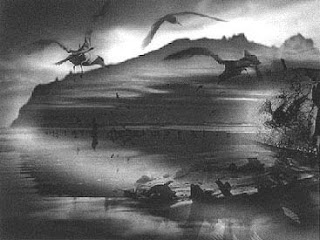 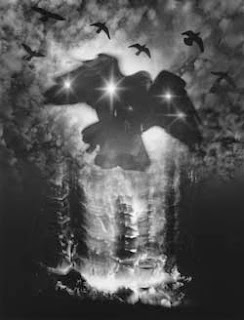 I grew up in Maine, in a small town. In winter i would wander down to the end of my street, which opened into farmland - there were only a few colors - white=snow, green = pine trees, blue = sky.
And also black = crows.
So I saw this in the NYT Science section, I definitely clicked on the link to the article.
"When Birds Squawk, Other Species Seem to Listen"

Here's some awesome improvisation/ temporary art from a guy I've mentioned in this blog before:

In his book “The Mysterious Opacity of Other Beings,” the photographer Richard Misrach offers a unique beach experience. The bird’s-eye images of swimmers, sunbathers and expanses of beach and ocean were taken by Mr. Misrach on a digital camera from a hotel balcony in Honolulu.
Posted by CaliforniaSilverwizard at 2:47 PM No comments:

Labels: Black and white darkroom montage, black and white photography, california beach, california coast, darkroom montage, digital photography, hand coloring
Newer Posts Older Posts Home
Subscribe to: Posts (Atom)
I do both traditional B&W darkroom work (most notably photomontage), and digital work.
So the post topics alternate between the two.
I still feel that I am at my best... in the darkroom.
http://www.bobbennettphoto.net/DarkRm2/index.html