This new digital age seems to have ushered in the notion that everything can happen at warp speed. There's twitters and tweets, instagram, email, cell phones and web pages that get refreshed on an hourly basis.
And maybe soon you will get pizza delivered by drones, and Amazon will have same day delivery.
For me?... it's all too much.
Some things take time, and that's the way it should be.
Do you know the word 'percolate'?
It's a process that takes some time.

Nobody percolates coffee anymore, like they did at the after the church service social thing when i was growing up in the '50's.....Now? they go to Starbucks and get it in under the corporate mandate of 60 seconds +/-
I enjoy the many uses of words, & language. At the most prestigious east coast boarding school i went to for 6 years, we were required to take latin, & one foreign language - my choice was french. I took Greek to avoid this thing called 'sacred studies' - which was basically religious indoctrination.
So to me 'percolate' has more than a literal definition, it is also about a process of 'simmering', if i might use another cooking term.

In 2010 I had a darkroom sketch i called 'sky cave', it combined a some cirrus clouds with a hole in some rocks on an Oregon beach.
So i started w/ this sketch: 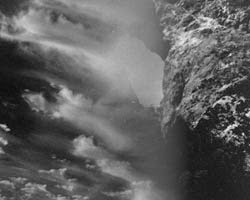 When i went to print it, for some reason i thought another frame might work better, taken from inside a cave at the beach, i liked the motion blur, but the print?...just didn't make it. 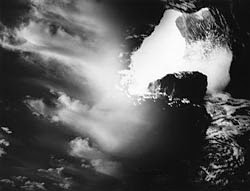 I dragged it into Photoshop, and added some pseudo-stars. 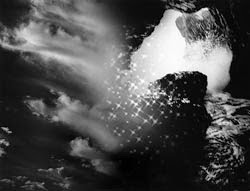 Nope, a no-go, gets a grade of ...'worse than just leaving it alone'.
But i left the sprint in my big pile of 'sift over these once a week with an open mind' stuff.
Let it *percolate*.

A while back, when i looked at this again, a light went on in my head - it was about a staircase i had shot many years ago at the the Wall St Mill, in Joshua Tree NP. A ladder leading into the hole in the rocks. Another 'aha!' moment - the light in my head goes on. I like it when that happens - i don't have alzheimers yet (at 63). 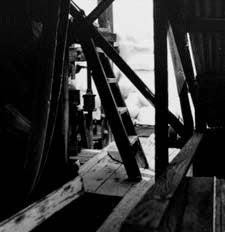 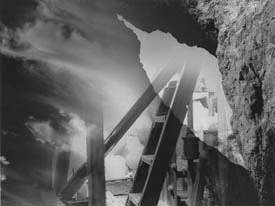 I haven't been doing the 'whatever catches my eye' file much lately, but this month I got a few:

Here's a really lyrically scorching song I am surprised I have never heard covered, and it should be covered, saved from oblivion:

Yardbirds - 'Mister you're a better man than I'

Keith Relf was not a great singer, technically speaking, but he knew exactly how it had to sound, & feel. Jeff Beck was still emerging as the giant he has become, his licks are already cutting to the bone.
Relf was 33 when he died from electrocution, in the basement of his home, while playing his improperly earthed (i.e., grounded) guitar. What a great harmonica player!
http://en.wikipedia.org/wiki/Keith_Relf 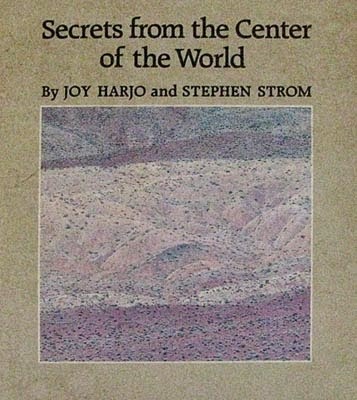 Search it out on Amazon - it will be worth your time

"He played a few jazz standards, but mostly those tunes the people would know who changed buses there. Nice tone. And there’s something about a lone horn player standing at the corner of our lives. I went out walking and talked to him. His name is Leroy. No band, or band in the works, just him, singing hopes and dreams, making a living, making a story."

I listened to a similar musician many years ago 74-75-ish, in old town Alexandria VA., before it was yuppified. Just me, an old nikon w/ a 28mm lense, and a fat joint :-)
Such sweet music, such good times!
I definitely relate to what JH is talkin' about.

I'll be back again next month, come hell or high water.

Posted by CaliforniaSilverwizard at 5:57 PM No comments:

Labels: beach, Black and white darkroom montage, black and white photography, california coast, darkroom montage, photomontage, surrealism
Newer Posts Older Posts Home
Subscribe to: Posts (Atom)
I do both traditional B&W darkroom work (most notably photomontage), and digital work.
So the post topics alternate between the two.
I still feel that I am at my best... in the darkroom.
http://www.bobbennettphoto.net/DarkRm2/index.html