My photoshop sketch gets me into trouble...sort of.

...Maybe a better way of saying it would be the P'shop sketch 'bit off more than i could chew' in the darkroom.
I've been a darkroom diehard for over 30 years now. It's the most fun you can have with your clothes on, ya know? I will never give it up until i get alzheimers (I will soon be 61 YO! Yikes!) and can't find my way there anymore. Or darkroom paper and chems completely become unavailable. Which ain't gonna happen anytime soon. A lot of products have been discontinued, but replacements have either sprung up, or there's another product that's a good substitute.
An example?... for many years my film of choice was Agfa 100ASA, souped in Rodinal.
Agfa is gone but i find Ilford FP5 to be pretty good - it builds up density a bit faster, but i can live with that. The formula for Rodinal is old enough that it is in the public domain, so another company makes it, and calls it 'Adonal'.

I've been doing photoshop sketches for darkroom montage prints for a while, they've been a big help, and the darkroom print has always worked out fine... until this one.
Here's my sketch: 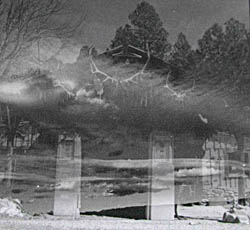 I used some layer options and multiple overlays in ways I just couldn't replicate in the darkroom, though I sure as hell did try. And it's not that the darkroom version was bad... it just wasn't what I expected or hoped for.

Here's how the layers work, from the bottom up:
1 - image of the old gas station
2 - a white gradient that lightens the top part/sky a bit.
3 - a levels layer that lightens all below.
4 - the sky, w/ a layer mask that blends out the bottom, so the landscape horizon ends before the area of pavement in front of the gas pumps begins.
This is set to a layer options setting of 'lighten' - this is the part that darkroom can't do, that got me in trouble.
5 - a duplicate layer of the sky, layer option 'normal' but dialed back to 70%.
6 & 7 - just a levels layer that crops the image - i add guides that are the crop, marquee that, invert the selection, & add a levels layer, slamming the white point all the way to the left, turning everything outside the guides to white.
8 - one final levels layer to adjust contrast.

So here's the darkroom print: 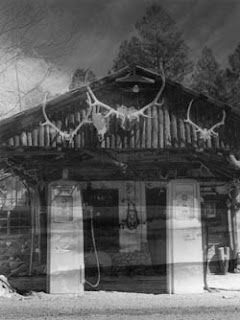 This worked... sort of. It still doesn't have the transparent feeling of the sketch.
Is this bad?... or good? As always, it's all in the eye of the beholder. I wasn't completely happy, i wanted to explore this one further.

So I tried some hand-coloring on this one. Hand-coloring is a way of re-focusing attention, rebalancing how things are perceived. 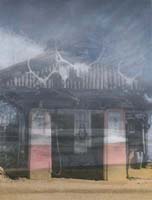 I went back to the scan of the darkroom print, and did some Photoshop work on it, attempting to get the same feeling as the sketch. It seemed much improved, much closer... b-b-b-but still not the same... as the sketch.

So i caved in, came over to the 'dark side'(digital). 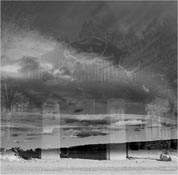 Which of all versions is better?
It's "viewers choice". I really can't choose, or decide. They're all interesting.

Larger versions of all images:
(including a small PSD file of the digital version)

Next month? - Digital - turning a 'one off' into a whole new thing.

Two changes to the blog:

#1 - I have closed the comments option - all it does is collect spam.
I would be happy to hear from anyone:
"bobbennettphoto at yahoo.com" 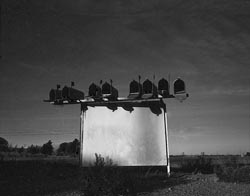 #2 - The 'whatever catches my eye' file is now at the end of the post.

"Portraits, illustration, news, cinema -- this 1946 film from the Your Life Work series describes the many career tracks open to young people interested in photography and cinematography. Courtesy of the Prelinger Archive, the educational reel is full of tips for hobbyists and aspiring pros.

Skip to about 4:20 to learn about photojournalism. The dry narration doesn't glamourize the industry, pitching it as a sensible professional path: "Contrary to popular opinion, a press photographer's life is not just one big thrill after another! He does shoot exciting scenes from time to time, but such events are the exception. Most of his work is routine in nature, consisting mainly of pictures of people and places connected with the news.

The archival footage of journalists and their retro gear will warm the hearts of any die-hard fans of analogue image making. Check out the shot at 5:00 of newsreel cinematographers perching tripods on the roofs of their cars to get a high-angle shot:

Don't miss another gem from the Your Life Work series, which pushes careers in typesetting".

Click on the link for this one! A Career in typesetting? You might think that digital had completely buried this one, but from what I have read, after some significant exposure to digital, many are coming to appreciate traditional/analog stuff. 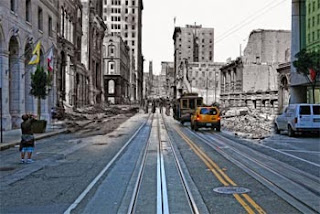 Photographer Shawn Clover created “photo mash-ups” of the ruins with the modern day cityscape, in hopes of going beyond the typical setup of “then and now” photos. The project began in 2010, with the second installation out a few weeks ago.

For more than five decades, the Charles A. Hulcher Co. filled an important niche in the camera world. Their cameras, which shot up to 100 frames per second, were used to make photos of everything from Space Shuttle launches to Major League Baseball games.

But as digital cameras came to dominate, Hulcher saw business decline steeply, and today the company is down to just four employees.

“Digital has pretty much killed film cameras,” says Richard Hill, 75, who has been at the Hulcher company since the 1950s.

What does 'limited edition' mean? - open to interpretation, it seems.

Hope you enjoy all the above, stop back in next month.
Posted by CaliforniaSilverwizard at 11:29 AM