Too many tigers here! 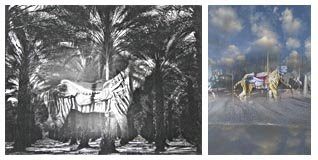 I seem to have a fascination w/ rather 'dated forms of entertainment', like the Musee Mechanique in San Francisco.
That includes merry-go-round/carousel rides like the one above, in both images, in Golden Gate Park, San Francisco.
There's something about the garish colors, and the simple momentary pleasure of a ride here,
that's really refreshing, especially in times like these.
'Let's eat drink and be merry, for tomorrow we'll die' - something like that.

Not a bad 'plan B' - When everything financial is melting down, religious extremists are banging on any door they can aim an RPG at - like they'd really know what to do w/ an entire country, if they controlled it - & hey, perhaps we should throw acid on the faces of female Afghani students, to discourage them from getting any education, that's really 'progress', and a great way to run a society, isn't it?
Enough of my political rant, already.
I can't affect any change...but it feels good to complain, and let it all out, doesn't it?

I recently got some positive feedback from a reader who liked a post from many months ago,
which involved a darkroom image and the digital variation of the same theme(s)...
So this is a follow up to that, another image that I worked with in the darkroom, and digitally -
they come to separate and different ends (what a surprise! ;-) ).

Obviously, there are big differences between doing darkroom work, and digital.
In the darkroom, I have to work relatively quickly - I have a tray of developer that is degrading quickly by exposure to air, and getting browner by the hour. So I've got to finish a print within a few hours of starting it...unless I cover the developer w/ a sheet of plastic/'saran wrap' weight, and hopefully it will survive until the next day...
but that's about all the 'rope' i have (to strangle myself with?).

With digital, you can do whatever the hell you want, and hit 'Command+S(='save')' -
and return days, weeks, months... later.
I'm not sure whether that is a good idea, or a bad one.
I've heard a lot of photographers say pretty much the same thing about Photoshop:
The best thing about it is?, you can do anything...
the worst thing about it is?...you can do anything..
(and get totally lost in the possibilities, and never come to a conclusion)
Amen!
I had an interesting (digital montage) image of a beach, with waves washing over the sand,
with a nice sky above, so I tried out the tiger, overlaid on that.
'Not bad' I said to myself....
let's 'save' (and 'park' that for while...)

The darkroom version came about very haphazardly, just a bunch of proof sheets on my work table, and these images ( the tiger and the palm trees) just landed there at the same time - I've always liked the neg of the palms trees, it was made years ago, somewhere in So. Cal. - I guess it's a 'palm tree farm'. I love how they have them all in very nice rows, that recede in diagonally, as you turn one way or another.

And I thought of the phrase in a Rudyard Kipling poem:
"Tiger, tiger, burning bright"
((At least that's how I remember it, many years after reading anything by Kipling.
I think it was on my mom & dad's bookshelf, which was in the hall outside my bedroom - I'll figure they put it there for a reason, so that if that was as far as I could walk when I was sick ( which was ALOT when I was 6, 7 and 8 y.o.), I would dig into it, which I definitely did.))

So I tried a few prints of the two, late in the afternoon. Glad I did :-)