But first, the usual 'whatever catches my eye' file:

Don't throw those old film cameras in the trash just yet!

At the bottom of this page is a link to this:

12 of the world's most bizarre cameras
So much more than a pinhole in a box — these cameras will blow your mind.

Imagine an underwater world without whales, sharks, and dolphins, where jellyfish and algae rule. It's already happening, says marine biologist Callum Roberts in his new books...
‘The Ocean of Life’—And the Sorrow Beneath the Sea

Why Thoughts of Death May Be Good For You

Reminders of death can improve life, according to a review of research on how people respond to both the conscious and unconscious awareness of their own mortality.

I've had a lot of 'thoughts of death', being now 60 YO, with mounting medical issues.
It's not the 'being there'(dead) that scares me, it's the 'getting there' part that does.

Nestled near Union Square, amidst the travelers, Chinatown gates, the high-rise hotels and department stores, is the Lomography Gallery Store, a place where you can purchase cameras with a wide array of personality, color, and odd lenses that use the standard 35mm film or the lesser-known 120 roll medium-format film.

Art Is Long; Copyrights Can Even Be Longer
By PATRICIA COHEN
Published: April 24, 2012

Will Google own your files if you use Google Drive?
(Probably not......)

"We think of Google  and Facebook as Web gorillas.  They’ll be around forever. Yet, with the rate that the tech world is moving these days, there are good reasons to think both might be gone completely in 5 – 8 years.  Not bankrupt gone, but MySpace gone.  And there’s some academic theory to back up that view, along with casual observations from recent history."

The Death Of Facts In An Age Of 'Truthiness'

"According to columnist Rex Huppke, there was a recent death that you might have missed. It wasn't an actor, musician or famous politician, but facts.
In a piece for the Chicago Tribune, Huppke says facts – things we know to be true – are now dead."

The bureau chiefs and national correspondents of The New York Times work from offices in 14 cities across the country, and report from all 50 states.

They drive and they observe and they eat and they buy and they report. Then they drive again. These are some of their favorite stretches of road.
— SAM SIFTON, National Editor


Just Me and My RV

I HAVE spent the night in a Walmart parking lot. I have driven through a national park with a trail of cars in my rearview mirror. I have learned how to dispose of my waste through a plastic hose, and I have filled my gas tank more times in one week than I thought was possible.
But this is to be expected when you’re driving a small studio apartment, or, as I began to call it, my “rig.” One man in a rural California border town even called it cute. He said it reminded him of a Doritos delivery truck.

I put off the promised 'handcoloring' post in favor of this one.
Road trips are the *greatest american pastime*, load up the car with 'whatever', and hit the road!
It's almost summer (vacation time)....!

Go somewhere, anywhere, that you haven't been before.
I love it, my dad was great at doing this, our family did it a lot, even though my mom argued with him constantly about "where the **** are we going?" and other useless and irrelevant questions. We got to somewhere, somehow, always more interesting than where we were yesterday.
Once we drove from our home in Maine to Canada, through various back roads. This was in the 1950's, no interstate hi-ways at all.
For a while, all the signs were in English.... then all of a sudden, they were all in french.
We had crossed the border into Canada, no customs, no nothing.
All of a sudden the road signs said things like "Voullez-vous Gitanes?"
('Gitanes' = a french cigarette that will have you hacking in no short order!)

The road trip mentality was embedded in me, a looong time ago.
Thanks Dad, 'I got it'. :-)

Now i go to many places out west...same state of mind/travel plan = wing it
Here's a few good links, hit the road, enjoy yourself!

http://parks.ca.gov/
Check 'em out before they close, due to ridiculous state budget problems in CA.

So what is my road trip advice?... 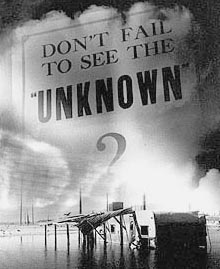 #1 - You can totally wing it, and that's the approach i have taken, many times, more on that below...

#2 - There are however many places where taking a guided tour of some sort is definitely the way to go.
You might drive to get there, but at a certain point, cede to the locals - they know things much better than you do. A couple of examples?

Another example, where you had better go w/ local guides:

I have been to Canyon de Chelly in Arizona....

If you go to the 'national park' what you get to do is drive around the canyon in one big circle, with a few turnouts/viewpoints. There seems to be just one 'viewpoint' that has a trail leading down to the White House ruins. That trail is fine, easily negotiable, for most of the way....UNTIL!... you get to a 40 ft long bit of trail that is all of 2 ft wide, crumbling rock, very uneven. It is carved into what is not exactly a cliff, but close to it. A false move, a stumble? you will tumble to, at best, very serious injury, or death.
I did it, but won't ever try the likes of that again. Next time? I'll take the Navajo tour, much safer.

Be Safe! Stay alive to make photos another day!

My rule of thumb is.... 'If the worst that can happen, happens... is the result survivable/tolerable?'
The answer to that question is... the answer to 'should i do this'?

Every few months there is a story in the media about a few people who end up dead, thanks to bad decisions, unpreparedness, etc.
Don't add yourself to this list of casualties. A couple of examples:

A couple & their 2 kids leave somewhere in Mid-Oregon in December, headed to Gold Beach, on the coast, for a motel reservation. They find a google map that indicates a road over the mountains... it is winter... the road is not marked, no white lines, no route signs... they continue on... it starts to snow... they continue on.. they get trapped by snow, the husband tries to walk overland to find rescue.
His wife and 3 kids are rescued... he dies, being lost,  from hypothermia. Sorry, but i have to call this STUPID!
Don't trust google when your better instincts should tell you 'NO!'.

Another example:
A couple from europe (i think Germany?) decide to take a dirt road in Joshua Tree Nat'l Park that leads to a very 'off the grid campsite'. They are not prepared for being stuck on this dirt road, not enough water, or food. They get stuck in the road - rather predictably - these roads are NOT for anyone who doesn't know what they're doing.
They are found dead a few days later.

There are other stories i have read, similar ones...
All have one thing in common: "stupid"!... and 'not prepared'. Enuf said.

Back to #1 - "Wing it".
Always be prepared for that odd unpredictable moment when a light goes off in your head, and says "i need to take an image, right here and now"! Do it! you'll be glad you did! That's what road trips are about.
Here's a couple of mine:

'Walkin' the line'
Taken somewhere in southern Utah, not too far from Page, AZ. I stopped to take a few pix of some weird rock formations by the side of the road... and then as i was walking back to my car i saw this - loooong shadows, including mine, all pointing to the rising moon. Purr-fect! How could i not shoot a pic of this? 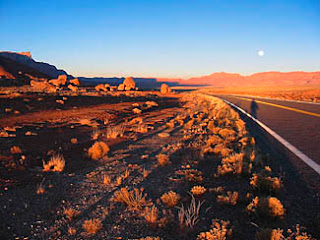 This one was a stroke of mad luck, for sure. I woke up in an AZ hotel room, did my usual wake-up routine, coffee and cigarettes and 'wake & bake', as they say, and started driving. Drove thru this very lonely deserted town... and as i drove thru, i saw this: 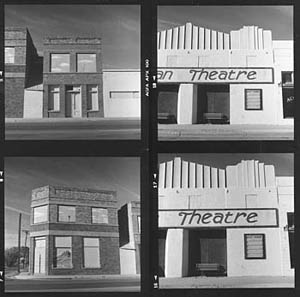 This one had me slamin' on the brakes, and stopping short, immediately.
I have done a number of montage images with just these few negs.
What a great discovery!

Hope the above whets your appetite, that's what I intended.
For a few more & larger images:

Posted by CaliforniaSilverwizard at 5:05 PM No comments: