Play me some of that ol' time mountain music... It's another music player of some sort (at the bottom of the montage image) - the holes in the disc get translated into musical notes.
(At least that's what I think it is.)
It's a disc that you won't find it at Apple, Microsoft, Seagate, that's for sure.
It was also shot at the Musee Mechanique in S.F., at Cliff House, before it was moved.
(See the previous post for links to the M.M.)

It's dodged out to '0' by the middle of the image.
At the top, is a landscape shot at Joshua Tree Nat'l Park - just rocks and sky...
but the rocks have very strong vertical 'grooves' in them.
How they came to be this way, I have no idea - consult a geology expert, if you want a professional answer.
My own personal opinion is... that what we now see as desert?... has been shaped by water, lots and lots of water, & was once much greener... and a whole lot of weathering has gone on, for many hundreds of thousands of years.

The neg that tied it all together was of a root of beach grass that exposed by the elements, and was left to waver back and forth over the sand, and carve these 'grooves'... 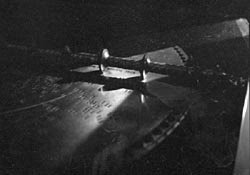 This connects the grooves in the rocks, with the disc player at the bottom.
To my eye, anyway...
Since this landscape was the last exposure added, I tried 2 variations.

Larger images are at:

I still feel much the same as I did 20+ years ago, about creating these images, which I've written about in the statement on my website:

"It starts by YOU telling the picture what it will be -- in the end, THE PICTURE tells you what IT will be..."
(Robert Rauschenberg)

I'm obviously interested in things metaphysical - beyond that, it's up to the viewer to decide what's going on.
If I haven't figured them out yet, (and I haven't, not *really*), why should I presume to explain them to anyone else? Many of the pictures just seem to 'happen', because the individual negatives are 'looking' for each other.
I'm just a chaperone, and a really loose one at that......
(...But those were always the best kind of parties, right?)

#1 - I'm surprised that anything I wrote, said, or did that long ago still rings true for me.

I'll save you the google search, here's some appropriate links:

Time for one more post before the holidays hit, and then I'm taking some much deserved time away from
anything resembling the 'usual routine' - my plan at the moment is to go to ..."Vegas, Baby!"
But not for anything 'vegas' and glitzy - there's lot of interesting land and parks within an hour or two drive northeast...
Posted by CaliforniaSilverwizard at 2:03 PM No comments: