"To Photoshop, or not to photoshop.."

And if you do 'photoshop' (that has become a verb hasn't it), when does it become too much?
This is a topic that gets constant press, and will inspire discussion that is interesting, amusing... all the way to ridiculous, for a very long time.
It would seem to be pretty easy to spot 'over-the-top ridiculous' work, which would fool no one, but that doesn't stop some people:

But sometimes it's harder to spot manipulation, and to decide where to draw the line.
A recent brouhaha at the NY Times is a good example, they have a great photo blog, check it out:
http://lens.blogs.nytimes.com/

The brouhaha I am referring to is this one:


A reply by the photographer followed on 7/31:

Edgar Martins is a photographer whose picture essay in The Times Magazine on July 5 and an accompanying slide show on NYTimes.com, “Ruins of the Second Gilded Age,” were found to include digital alterations — contrary to the stipulations of his contract and his stated, repeated assertions to the writer, editors and fact checker at the magazine. This week, Mr. Martins released an essay, “How Can I See What I See, Until I Know What I Know?” It constitutes his response to the controversy that has arisen.


"How Can I See What I See, Until I Know What I Know?" you say?
Personally, I think the writer (and photographer) has either spent too much time in some fancy art/photo school, or maybe he just found the wrong calling, and should do creative writing instead.
This question implies that one must 'know' before one can 'see' - exactly backwards.
The 'seeing' must come BEFORE the knowing, the 'seeing' informs the knowing.
Anyone who thinks differently, has their priorities mixed up.
At least, I think so.
I can't possibly know much of anything, until I see it.

Fortunately, there is more sensible ( and more easily understood than Mr. Martins) discussion being had:

"Photoshopped images: the good, the bad and the ugly
The graphics editing tool is praised for making people look their best and dissed for setting the bar too high."
By Jeannine Stein
August 2, 2009
http://www.latimes.com/features/lifestyle/la-ig-photoshop2-2009aug02,0,3129812.story

Even as I was in the process of writing/compiling this, for this August 9th or so entry, yet another instance of 'hey, too much photoshop?' was in the news:

I am no Kelly C. fan, but from the pix I've seen, she looks just fine.
Her fans, judged by the comments posted after the above web page, don't care how she looks...
and they are not as easily fooled as one might think - here's one comment:

11. Maggie - Fri Aug 7, 2009 4:59pm PDT
Does anyone else see the irony with Self magazine airbrushing the Total Body Confidence issue of their magazine?

Maggie is probably not alone.
You know where I stand on this one, photoshop is 'neutral', it's just a tool - it's the brain & heart behind the hand on the mouse that counts.


Another thought, amidst all the constant tweaking done to the images in magazines, & in show-biz, etc, & the 'American Idol' crapola?....
(All of this is, of course, a matter of 'looks count' (too often, more than substance..))
Have you ever seen the album cover for the U.S. release of the Who's first album, with the four band members posed w/ an iconic London tower in the background?
None of these guys would make it far past square one on American Idol ("waay too ugly!") - Keith Moon might make it past square one on 'looks', but as soon as he opened his mouth, or sat down at a drum kit, you knew he was anything but normal.
The rest of the band?.. all look like guys you would never, ever, want to meet in a dark London alley after a few pints.

Sooo... what's happened to them, since this album cover photo?

Pete Townshend has become one of rock's most revered and respected writers...
John Entwhistle has been recognized as a bass player with few peers...
Roger Daltrey is one of the few rock vocalists who can actually *sing* ( and the only one who could ever do justice to Townshend's writing...)
Keith Moon?.......just broke the mold, any mold, anywhere, at least in 'rock' music, there has been no replacement since - listen to the drumming in "Won't get fooled again".)
Enuf said.
Oh, sorry, not quite enough yet, just one more thought - what do you think American idol would have done w/ Jimi Hendrix???

I'll be back, soon, w/ some 'darkroom', including, at some point in the future, this one, still just a photoshop sketch... 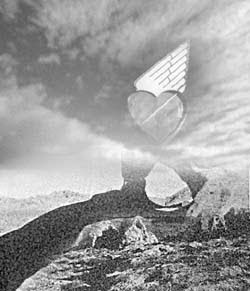