Back to the traditional darkroom... 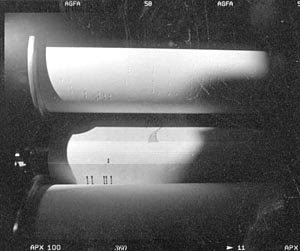 The 'mechanical ("encryption") device' (it seems so quaint and ancient for these times) was shot at the 'Musee Mechanique' when it was still on a lower level, beneath the Cliff House restaurants, at Ocean Beach in S.F. in the mid '90's.

The M.M. has since been moved to much 'nicer' space, but nothing gets the light that used to blast thru windows facing west/ to the sunset - it just ain't the same, for me.
And the ambience?... was great! - it was crowded, noisy and sometimes even a bit smelly.
I grew up on the east coast, & I've been to many of the coastal resort towns there, from Maine to Maryland & Virginia, and it feels more than a little bit familiar.
(Yes, the contact is grubby and scratched eight ways to sunday - guess I've sifted thru my contact sheets alot, way more than i can fix w/ any photoshop filter!)

It's a music player, player piano, of some sort, I think - the holes in the paper 'tape' get translated into musical notes.
If anyone would like to correct/inform me?... please feel free to do so.

'Earth and sky are always interconnected, and affect each other' - that's as best as I can describe my choice of sky for the top, and sand, for the bottom.
The sky was shot off the rooftop deck I enjoyed while living on 12th Ave., in SF.
The sand was shot at Pt. Reyes, somewhere.

(Sand is a favorite topic of mine - it is infinitely variable, & always interesting. It can be formed and reformed, again and again... and never looks the same.
Hey!..that could be a blog topic, just by itself.... watch out, it just might happen! :-) )

As usual, there's nothing technically tricky about this, it's matter of having the right negs to begin with, and then managing to realize they are 'good friends', and deserve to be together, in an image.
I can't emphasize this part of montage-making enough - you've GOT to have the right stuff to work with, before you even start to think about printing.

The first, and most important exposure is of course the first one, above.
I dodged back the top and bottom with two black strips in my home-made filter tray, below the enlarger lense, and dodged a bit extra by hand, but allowed some amount of exposure, on which i could 'overlay'/expose the sand and the sky.
If you haven't already done so, I suggest you check out my 'darkroom methods' pages for details on a simple 'below the enlarger lense filter and dodging device': 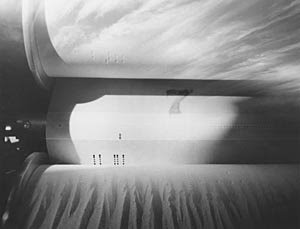 'Encryption device'
Why did I call it an 'encryption device'...?
Well, with all the current discussion of climate change, CO2 pollution, etc, etc, etc (ad infinitum, almost), do we really understand how Gaia (the earth) works?
I highly doubt it - we like to think we do, it makes us feel better... but alotta times, it's an illusion.)

Larger images, including alternate versions, are at:
www.bobbennettphoto.net/BeachBlog_DkRm_07_08/Encryption.html

Stay tuned for a lot more darkroom - I got some mountain music, a mysterious space, and an empty bucket waiting in the wings...... and that's not counting the door handle, schoolroom, and carousel tiger I worked on last weekend.
Posted by CaliforniaSilverwizard at 1:28 PM No comments: