Can any creative artist pass on their 'secrets' to anyone...?
Good question, isn'it?
Well..... Hhmmm... yes and no.
In this post, I'll discuss both, as applied to darkroom & digital.

But first!......
I may have to add some political commentary, as a prologue, on a regular basis - there is too much going on to ignore!

(I snipped this from a story on... i don't remember! CNN? The NYTimes?.. sorry I can't attribute it properly.)

>>>The Supreme Court on Thursday opened wide new avenues for big-moneyed interests to pour money into politics in a decision that could have a major influence on the 2010 midterm elections and President Barack Obama’s 2012 reelection campaign.

“It is a major victory for big oil, Wall Street banks, health insurance companies and the other powerful interests that marshal their power every day in Washington to drown out the voices of everyday Americans,” the president said. “This ruling gives the special interests and their lobbyists even more power in Washington—while undermining the influence of average Americans who make small contributions to support their preferred candidates."

Rep. Mike Pence (R-Ind.) said the ruling “takes us one step closer to the Founding Fathers’ vision of free speech, a vision that is cherished by all Americans and one Congress has a responsibility to protect.”
“This is a great day for the American people and free speech,” declared Cleta Mitchell, a top Republican election lawyer. She said that through the decision the court “has ripped the duct tape off the mouths of the American people.”

Hellooo!, excuse me?! ..did you say:
"ripped the duct tape off the mouths of the American people"????
"a great day for the American people and free speech????
No, absolutely not. The duct tape has been ripped off of *major corporations mouths*!!!,
as if they didn't already have enough say, through lobbyists and PAC's!!!.
And it's another example of 'news' that is total BS.
I like Obama, i think he has been dealt such a bad hand, no matter what he does, he will never be able to do enough, because there is just too much to be done, no one could possibly deal with it all.

This Supreme Court decision is AWFUL!
The effects will be felt for years, maybe decades, to come.

I get the impression many photographers guard their techniques closely - if they are doing things that make them money, they sure don't want anyone else getting in on their act. Can't blame them for that. But since I don't depend on my darkroom work to pay the rent (haven't, for well over a decade), that one just doesn't apply to me.
Besides which, nothing I do is very complicated.
But most importantly, I truly believe that it's not the techniques themselves that are the real heart of what my images end up being (or what creativity is about, in general).
I've been doing photo-montage for over 25 years now, and I've developed a 'sixth sense' about what I shoot to begin with... and what I choose to combine.
And how I do both of those is the result of many (many!) years of creating something visual.
And, yeah, well,... maybe a bowl or two... or three :-)

And if you learn my techniques?... you will bring different source material, and a different sensibility, to the table, no two ways about it. And perhaps other 'particulars' of your situation will kick you into different uncharted waters.
As an example?.. I definitely took my first inspiration/cues from Jerry Uelsmann,
(http://www.uelsmann.net). I've seen a photo I dimly remember of his darkroom, he had 4 enlargers, and so he could combine 4 negatives together, by exposing the same sheet of paper in sequence. I only had 1 enlarger, never had the space or money for more, so I came up with ways to deal with that, and they were actually liberating! I could add as many different elements as I wanted.
I was also rather forced by circumstances, to start doing commercial/assignment work, which inspired me to come up w/ other techniques., and to do hand-coloring.
Most of people wouldn't have that problem (or should I call it an opportunity?).
So I am 'telling you my secrets (sort of)'... but you'll never end up looking like me, I fear for nothing, more power to you.
For instance, if your were to have these two negatives (at the top), would end up with the two prints below?

I didn't think so - I rest my case! :-)
I am telling you the only part of the 'secret' that I can - the intangibles that get me from the negs to the prints, I couldn't possibly describe.


As for digital work/& secrets?...
I am still, at 58, stuck w/ a day job, not full time, more than part-time - it is making digital prints/reproductions of art. Which can really be a bitch.
Artists want the prints to look as much like the original art as possible. If I can scan the art (I have at my disposal an Epson 12x18" scanner), that makes life much easier than if I have to deal w/ a 4x5 transparency, which is then scanned, and becomes my starting point.
Shooting any art onto 4x5 Ektachrome changes it, contrast picks up, colors shift a bit.
Real life is messy and inconvenient sometimes - deal with it.
Regardless of the starting point, I have to adjust to match the art.
And if 'global' layer adjustments just don't work (and they don't, many times)...?!
I have to pull something out of another 'bag of tricks' ( lots of masks. & layers, etc)
I wrote an old east coast photog. I knew long ago w/ my 'bag of tricks'.
And it went like this:
(Hey, "photoshop advice you don't have to pay for" - what could be better than that?)

As a preface, all this is based on how things get done where I work - how anyone else goes about this,
I have NO idea.

All the work I do is for artists, who are for the most part clueless about the compromises that must sometimes be made in the reproduction process, but they are incredibly picky nonetheless.
If anyone thinks an epson printer can match their cadmium red or orange?.....fugeddaboutit! it can't be done.
Better to tell 'em, upfront, get it over with.
But they are very particular about how their prints look, and we invite them to view proofs, and comment as they want. And we proceed from there...

So here's my work routine:

• First, give the image an assigned profile - Adobe RGB 1998 has proven to be AOK, & widely accepted. ( 'untagged' will definitely give you problems.)
and save the image as an RGB image - CMYK is problematic ( At least, I have a difficult time dealing with it) - let the printer make that conversion.
• Decide on a paper choice, and leave it that way!
(any change in paper/'substrate' can change the color)
• Hopefully the art has been photographed along w/ a kodak greyscale card - do an initial Levels layer that corrects that grayscale card to be as neutral as possible.
• Decide on 'printer settings & options', record them / write them down! and stick w/ them!
In Imageprint/Colorbyte software (which is what I have to work with), they don't make much difference - but using the 'generic/built in' Mac print driver? ...any change in paper settings will change color.
And obviously if you are using any profiles when the image gets sent to the printer, pick one, and stick with it.
My experience is that some are good... and some are whacked out, and useless, or worse (& get in the way).
((Remember the 'KISS' principle? ( "Keep It Simple, Stupid"!)
Do that. Ignore it?... at your peril!))

• Do a proof print of that 'V1' w/ just the simple levels adjustments - the software I use allows me to drag and drop the full size image file into a window I can 'describe' ( '10x15" ' for instance) and send to the printer. If you don't have that, you can just 'Duplicate image', & resize, and send that to the printer.
• Check that out, make notes, carefully, and start making layers to correct what needs fixing.
• The adjustment layer options i find most useful?...
---- Levels, but only to correct overall things - go into 'channels'...
and fiddle w/ any of them......but carefully!
---- 'Selective color' is the adjustment layer I reach for most often - it is seems to be better at dealing w/ any particular colors, in a 'narrow'/particular way - I want to fix what is broken, without fucking up anything else that isn't 'broken'...
but....beware! The farther the color is from a 'pure' red, green, yellow, blue... the harder it will be to affect it.
And there is a lot of 'cross-over' - a reddish/orange?... can be changed by dealing w/ both yellows, and reds.
And blues? where does a sky blue stop being a blue (in selective color) and start being a cyan???
Your guess is as good as mine.
It depends on the image you are working with.

i just keep making adjustments layers (and keeping them as separate/individual layers, so i can 'undo' easily).

• 'Hue/saturation' layers? I use em for the 'saturation' part - they work 'til about +25. After that, they just pull out all the 'modifiers' ('red' actually needs some of it's opposite, cyan, to feel 'rich and meaty').

Once global adjustments stop being useful, I reach for the magic wand tool, select areas that need a kick in the ass, and do just those things/areas - still sticking w/ the 'if it ain't broke, don't fix it' thing.
If I can't find a color in selective color, i treat it as a 'neutral', and work with that.

Don't change the order of the layers - that can affect how they work.
I work from the bottom up, & keep adding to the top.

And, yeah, I make numerous small proofs as I go along.

Sooo... here's a look at one image, way too big to scan, shot onto 4x5 film... and how I managed to make a print that matched the original to the clients satisfaction: 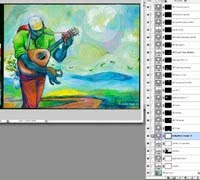 You can even download a small version of the Photoshop file, w/ all the layers, and check out what I did.
If anyone reading has thoughts/ comments? bring 'em on.

In a couple of weeks?... back to the darkroom!
Posted by CaliforniaSilverwizard at 4:31 PM No comments: