First, from the 'whatever catches my eye' file:

I couldn't possibly update you, as a once a month blog, on what has been going on in the middle east.
It seems that 'people power' is rising it's most beautiful head, every day.
I watch events on a daily, and sometimes hourly basis - CNN, ABC, Aljazeera.

NONE of the prognosticaters saw this coming. I am really glad to see this happening - this part of the world has so many problems, autocratic/dictatorial governments... rampant corruption... and a youthful hip wired population that has decided it ain't gonna take shit anymore.
Maybe Pete Townshend was writing about them, many years in advance - "we won't get fooled again".
But of course the final chorus was 'meet the new boss, same as the old boss'... and i hope they do better than that.
The studio version (the best! - Keith Moon's drumming = awesome!)
http://www.youtube.com/watch?v=SHhrZgojY1Q

This brought to mind an old song, by Billy Joel (it may be 30 years old, but it nails the mood of today, doesn't it?)
"We didn't start the fire, it's been burning since the world's been turning"
yes, yes, YES! so true!!
(The fire was lit when Leaky's 'Lucey' stood up on two feet.)


I guess people die every day, everywhere.. but it seems like recently there's been too many really good ones leaving us.
Gary Moore died recently - he was an excellent guitar player, part of Thin Lizzy several times. Dig this!
Gary Moore - Don't Believe a Word - live
http://www.youtube.com/watch?v=YzpMBscDNbM&feature=related

Absolutely marvelous!! "a heart is like a promise.. to be broken"

Gary Moore - 'The stumble'
http://www.youtube.com/watch?v=B0nKJFVVoYM&feature=related
This track has been recorded by a number of people - Freddie King, who wrote it, ..& Eric Clapton did a superbly tight version w/ John Mayall in the mid 60's. I think Gary smokes both of 'em.
As if that wasn't enough?....
The last track on Jimi Hendrix 'Are you Experienced' is 'Red House', which is a great way to end the album. After Jimi singlehandedly reinvents the electric guitar, you might well ask "yeah... but can this guy play the blues? Does he have roots?"... and Jimi's response is this track. Much as I love Hendrix, and have worn out vinyl, then cassettes, then CD's of his stuff, Gary gives Jimi a run for the money, so to speak, on this one.
Gary Moore doing 'Red House'
http://www.youtube.com/watch?v=XXYjEMTQRm0

If you like great drumming, click on this link - it has many great drum solos embedded. Enjoy!!!
http://www.rollingstone.com/music/photos/rolling-stone-readers-pick-best-drummers-of-all-time-20110208

A recent blog entry was about Alcatraz, and I mentioned how interesting and unique a place San Francisco is. Many great films have been shot here, including "Bullitt" w/ Steve McQueen, which has what many would call one of the best car chase scenes of all time.

The making of the famous car chase in the movie 'Bullit' - as told by the stuntman who worked w/ Steve McQueen:

(In all the popular opinion polls of 'what's the greatest car chase scene on film, ever?' ..this one is always in the top ten, if not number one.)

If you like Steve McQueen's work (he died waaay too young!) you have just got to see the movie - 'Papillon' - an 'escape' film like no other. If you haven't seen it?... rent it, buy it, stream it.
When the ending comes?.... you will stand up and cheer, even if it's just by yourself, in your own living room.
(I sure do, every time I watch this, and I watch this every few years, just as I do 'Apocalypse Now'.)
And after you've watched this... if you haven't watched the movie 'The Great Escape' with an all star cast, including Steve M., watch that too...
(Steve does a great motorcycle attempt at escape... he fails... but the attempt is awesome, it's a classic movie scene)
RIP, Steve M.!
He had this 'presence' (on film).... even when he did next to nothing....

There's another great scene in this film - as best I remember it, it goes like this - Bullit goes shopping, at his corner convenience store, on the way back to his apt.... he goes to the frozen food section, scoops up 3 or 4 TV beef dinners... then scoops up a few chicken TV dinners... then goes to the cold beverage aisle - slaps a six pack on top of the TV dinners... heads for the cashier, and then slaps a newspaper on top of it all.
That's all he needs or wants.
Ladies? this is how 'real men' shop! No BS!
------------------------------
You've probably seen something about how Jeopardy is testing artificial intelligence as a contestant..
Many people are writing about this topic, artificial(computer) intelligence vs. "the good fashioned human brain".

'The internet may connect us in unprecedented ways, and it may put more information at our fingertips than ever before. But just as it's changing how the world works, one psychiatrist says it may be irreparably altering how our personalities develop'.

I think the internet has definitely made many people more hostile, aggressive and racist.
Go to craigslist.org, and read some of 'rants and raves' - the hostility and racism is overwhelming, at least in the sfbayarea version.
Why?? You can post something, anything, and no one can get back to you other than online. If you were to say these same things to people's faces? They want to slug you, and you would think a good bit harder about what you said, tone it down a bit. Most people like to keep all their teeth, and not pay for bridges/replacements.. do they?

Online, you can also find/connect w/ people who share whatever sick opinions you might have... but if you went to your local bar or diner, and voiced the same views?... the reaction would be much different. You could easily lose a few teeth.

On this same topic, this is well worth a read:
"Why machines will never beat the human mind"
http://www.theatlantic.com/magazine/archive/2011/03/mind-vs-machine/8386/


Enough chatter... let's get down to some photomontage! 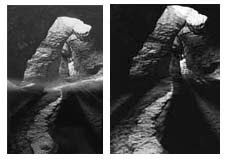 The one at left is my photoshop sketch... at right one of 3 darkroom prints

Just two negatives in this one... The rocks were shot in Chiracahua Park, SE Arizona, along the trail that leads down from the highest point. If you missed a previous entry that used another shot taken here, check this out:

The trail is spooky, to say the least - it winds thru all these various spires, and in several places, the tops of the spires have fallen and become stuck below in precarious positions. I felt like at any moment I could round a corner, enter a warp in time, and come face to face w/ an Apache.

The path at the bottom was shot at the Furnace Creek Inn ( not Furnace Creek Ranch - that's a mile or so down the road, and a different style), in Death Valley, which would remind you of the hotel on the album cover of the Eagles 'Hotel California'. It's built in the style of the grand old hotels, like what the Canadian Pacific Railroad built many years ago, and it has a small park of sorts beside it, with palm trees, lush grass, and these stone paths. It is a bizarre sight in a place as barren as DV.

This site has a load of good DV info, if you're interested:
http://www.death.valley.national-park.com/

In my photoshop sketch, the path connected with a highlight leading off to the right, out of frame.. and it also de-empahasized conflicting things in both negatives. Easy to do in photoshop - what happens when I take it into the darkroom....?
A few of those 'conflicting details' are visible, and actually make things more mysterious - it kinda reminds me of montage work I did 15+ years ago, when I didn't know where I was going, and had open/empty spaces that I then scrambled to fill.
The shadows on the grass beside the path were cast by something... but what kind of rock would cast that kind of shadow?... I don't see anything like that in the top part of the image. I like the dissonance, it makes things interesting....:-) Technically? this is very easy, just dodging out the bottom of the Chiracahua neg, and dodging out the top of the DV/path neg. But exactly how that works out was a roll of the dice, to some degree.

The way each print worked out was a bit different, and that's just fine w/ me. I don't try to control everything to the max, I like some variation in the different exposures, and however it works out?... is how it is.
It's like jazz - free form, ya do something, and react to/run with.. the results.
I've seen plenty of articles in digital-photo magazines, that give detailed explanations of what people do to their so-called 'photos'. At certain point, this stops being 'photography'.. and becomes something else. My question to many of these 'artists' would be the same - can you take a straight, unaltered image that knocks me out?
Can you do something in an old fashioned chemical darkroom.. that knocks me out?

3 final versions, all amusing, at the very least:
www.bobbennettphoto.net/BeachBlog_2011/WindingPath/index.html

Much more Darkroom montage in the near future! MUCH more! :-)
Posted by CaliforniaSilverwizard at 11:53 AM 1 comment: