But first, something from the 'whatever catches my eye...' part of this blog.
No politics this time, how about some architecture?
I photographed architecture for a decade in the Wash., DC area, '81-'91 w/ a 4x5, and I still have a better than average eye for what's going on. At least I like to think so.
You'd have to be blind or living in a cave to have not noticed the work of Frank Gehry, and all his wildly organic designs:

I noticed an article in my most recent New Yorker magazine, about a building designed by Jeanne Gang, in Chicago, a high-rise tower that has the most subtly beautiful facade I've seen in a long time.
I've been a subscriber to the 'New Yorker' for many years, you don't have to live there to appreciate it, by any means. It is a great collection of truly intelligent thought, that goes way beyond the headlines, and lands in my, or perhaps *your?*, if you wish? mailbox, once a week.
When I have to choose between beans, rice, and the New Yorker...?
Then I know times are tight, and I have to decide between... beans or rice.
The New Yorker is not on my list of disposables - it's that simple. 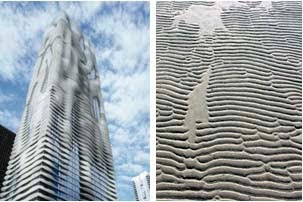 The thing that struck me most about it was that it resembled, of all things, the undulation of patterns in sand, at the beach!
What a beautiful building! Thank you, J.G.!!

Back to photography, and darkroom... 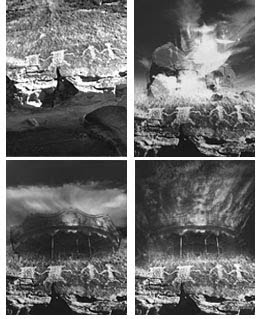 The 'dancing' part is the negative (top left) that started it off - at the bottom, with the petroglyph figures (at least it seems like they are dancing, what ever any petroglyphs 'mean' is speculation). I managed to come upon this at a very opportune moment - a lot of petroglyphs are very subtle and hard to photograph - when I came upon this one, it was very well lit from the side, emphasizing the slight 'carving' into the desert veneer.
I did three versions, and made some mistakes, or should I say 'prints that just didn't cut it'.
The first version (top right) used some rock formations from "Seven sisters" in Valley of Fire, Nevada, and some campfire flames.
Nope, this doesn't cut it. But I never toss a mistake/out-take away - I have found that creative/well thought out hand-coloring can breathe new life into a print like this. I'll get there, one of these days.
So what's next for the remaining two exposures with the dancers??
Hhmmm... I used to have an unwritten rule to myself, that if I used a negative once, I 'retired it'. But for the last 10 years, I have been working at a photo/digital studio that primarily does work for artists. And I've noticed that many of them have no problem producing many, many pieces that are all cut from the same cloth, and re-use the same colors, & compositions (w/ variations).
It's good for sales - galleries have a steady stream of similar 'product' to sell.
Sooo... I reached for one image I've used before - the carousel...
which seemed to fit in above the dancers well, and be a more modern version of: "..round and round and round we go, where we stop?..."
or perhaps: 'Eat, drink, and be merry, for tomorrow we'll die'...
It was all about 'partying down' when good times (good harvest, & meaty game killed, life is Goooood!) happen.
I figured there must be something to 'top this off', probably a sky...but which one? (I have sooo many).

Hey, how about a rather bizarre 'mushroom cloud' over SF Bay shot from my apt. rooftop many years ago?
Once again, even though this is a very interesting cloud... the print?
(bottom left)..doesn't cut it, it doesn't 'flow' from bottom to top.
Making mistakes isn't bad, so long as you learn from them.
And yes, stacking 3 images one above the other poses another challenge - it's obvious that I'm adding things one above the other, the challenge is to make it all flow, and become a vertical image...
Finally, I tried another sky, that really 'soars' vertically... and that was a winner!

You can check out larger images at: