"Failure is an option, but fear is not."- James Cameron

This darkroom entry is about taking some chances, trying to do something that's hard to pull off, and nearly succeeding - the final print needed a little photoshop tweaking, I have to admit. But it was simply lightening a few areas - the composition wasn't altered.

But first, several items from the "whatever catches my eye.." file:
Dig this picture! 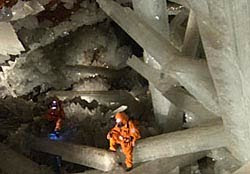 There's no photoshop here, folks! These crystals are as huge as they look!
Awesome!

http://news.discovery.com/earth/naica-big-pics.html
The Mega Crystals of Naica Mine: Big Pics

And also....... The famed Mavericks Surf competition was held recently, just south of SF, Ca.
All agreed these were record breaking waves: 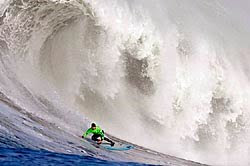 OK, back to photography & darkroom.

Every once in a while I see something about another creative type, talking about their work, that mirrors how I feel and work, too.

Creative works involves taking risks and making a leap of faith, he says.

"Curiosity is the most powerful thing you own," he said.
"Don't put limitations on yourself.
Other people will do that for you...
"Failure has to be an option in art and exploration because it's a leap of faith.
In whatever you're doing, failure is an option, but fear is not."
( I like last three words the best: "...fear is not (an option)" 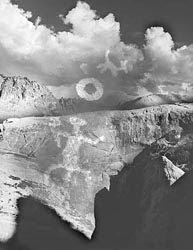 This one is an attempt to basically 'reverse something out' of a background - the petroglyphs being reversed out of the landscape/ background.
Which is only easy if the thing you want to reverse out is the same (negative) size as the image you want to reverse it out of (and 'sandwich' the two together).... AND there are no 'distracting' elements in either negative.
...it's not a perfect world (what a surprise!) and neither you or I will be that lucky!

The landscape itself is actually 2 images - the dividing line goes horizontally thru the center, with one rocky landscape below, and another with the clouds, above, which makes sandwiching just impossible, considering that I wanted to reverse out the petroglyphs from both the top and bottom exposures.
Sooo...I dodge back both top & bottom exposures with my 'below the enlarger lense' apparatus, and additionally dodged back the portion in the center where the 'glyphs were going to go.
If the print wasn't 100% there (maybe 90+%?) that's probably better than anyone reading this can do in a darkroom.

As usual, larger images, and a bit more yakety-yak at:

There's a Photoshop file of my sketch, which (roughly speaking) shows the dodging & burning stuff, and you can download it.
There's also thumbnails of all the layers, if you don't have P'shop.

The next few posts? Digital! I actually got a bit inspired by some 'scano-graphs' I did a few years ago...
Posted by CaliforniaSilverwizard at 1:10 PM No comments: