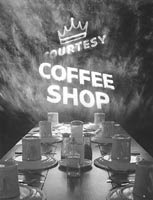 The 'coffee shop' sign was shot in Blythe, CA. in 2003. Seemed like it was one of those desert towns where most everything is closed by 7 PM.... but they 'leave the lights on' - that's the tag line to much Motel 6 advertising, which I kinda like.
The table setting at the bottom was done as some sort of restoration/exhibit in the Marin Headlands, Fort Cronkite, in about '96, '97, at one of the military barracks there.
I exposed the table setting first, from bottom, up, dodging out the top to '0'.

The coffee shop sign is sandwiched w/ a sky, and blown into the upper half, once again dodging back the bottom to '0', and of course a good bit of overlap between the bottom & the top.
There was no great soul searching on this one, it was about the nostalgia many of us have for old fashioned diners and the neon signage they use to lure you in off the road.
(It was also about a *really good cup of coffee* and the time and space to enjoy it.
Have you ever seen David Lynch's most marvelous foray into prime time TV, 'Twin Peaks'?
Dale Cooper (played by Kyle MacLachlen(sic?)) is always ready to enjoy a good cup o' coffee, strong & black, please.
Amen!, I can go for that anytime, too.
Well, I'd have to add some sugar & milk... hope Dale wouldn't be offended.)

"What makes this hang together as a montage"?...... well the concept, for one - coffee shop + table setting...but beyond that, it's about light - the light falling on the table makes perfect sense with the glow coming from the sign - the table setting was lit by a window that is above and out of the frame.

Notice the long time span from when I shot the table setting, until I shot the sign - about 6+ years!
Also notice that it is drop-dead simple, almost as simple the very first montage image I ever did successfully in 1984: 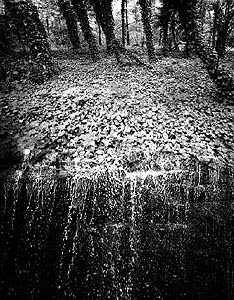 One thing I've been aware of for a long time is that the most important part of montage printing is not the technical printing details/techniques, at least not for me.
First of all, you have to have the right negatives/'source material'.
After many years of doing this, I seem to have developed a sixth sense about
what I want to commit to film.
Then, you have to connect them, as a print possibility - I spend a lot of time going over & over my proof sheets, making small drawings/tracings, and planning... thinking...& dreaming.
Yes, dreaming...
Neither of these has anything to do with technique, or technology, whatsoever.
It has to do with what goes on between your own two ears.

The best analogy I've been able to think of about this ('what goes on between your own two ears') is:
Jimi Hendrix could pick up the same Fender Stratocaster as anyone else (no doubt Fender has sold many, many hundreds of thousands of these), but when he played it, it didn't sound like anyone else ever had, or has since then.

Another thing this print has inspired me to do, finally, is to print on a matte surface paper again so I can hand-color one of the 3 or 4 prints I usually do of an image. I used to do hand coloring a lot, don't know why I put it aside, exactly.
Ilford's matte surface is very nice for this, but they seem to have stopped making it in RC, which is a whole lot easier for me to deal with than fiber, maybe that's why.
I also chose the Ilford Matte 'cause it's a very smooth, non-textured surface, and I'm finding that scanners are not kind to surface texture - they all seem to 'side-light' whatever you plop on the glass scanning bed. Sometimes that can be interesting...but when it's not? it's a total pain in the ass to get rid of the resulting texture. And I want to be able to scan/'digitize' everything I do at this point.
Anyway, a 50 sheet box of Ilford Matte Fiber is headed my way, from Freestyle Photo, in L.A.
It ain't cheap - 165$ for the paper, + shipping, but I think it'll be worth it.

Larger view of the image:
www.bobbennettphoto.net/BeachBlog_DkRm_07_08/CoffeeShop.html

...there's also a comparison of a B&W print, and it's hand colored version.

And if you'd like a preview of the next few darkroom images?....
www.bobbennettphoto.net/2008/index.html
Posted by CaliforniaSilverwizard at 5:24 PM No comments: