Here's the photoshop sketch of this post's print: 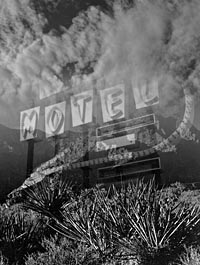 But first, the 'whatever catches my eye' file....

Why Noah Went to the Woods

He was a proud Marine who survived three brutal tours in Iraq and had plans to redeploy with the national guard. But when 30-year-old Noah Pippin vanished inside Montana’s remote Bob Marshall Wilderness, he left behind a trail of haunting secrets—and a mystery that may never be solved.

This is VERY long, but very well worth reading.

John McAbery carves out a life on the Lost Coast

Since this is "material may not be published, broadcast, rewritten or redistributed...."
all i can do is direct you to this page.

The Lost Coast is a chunk of land in No. California that juts out into the ocean & has escaped development of any kind.
The things this guy carves out... are awesome.......

How Do You Come Up With Your Best Ideas?
By Jared Keller

"The eureka moment, that invisible hand that pushes innovation forward, is elusive. An epiphany is a different way of solving problems than the problem solving we do every day," wrote Steve Blank in The Atlantic earlier this month. In an epiphany, you see the entire answer to a complex problem without realizing you were even consciously thinking about it."

"When we’re about to let our last breath go on this earth, will we be regretful about paperwork, emails or Facebook, or missing a sale at Kohl’s? What will we wish we had done? What words are we carrying that need to be said? What could we do to lift the burden of someone?

What has threaded through this time here is the song “Espoketis Omes Kerreskos”. I hear it and sing it constantly. I have been studying how our Mvskoke music is a root of jazz, blues and rock. To even state what has become a very obvious truth rocks the foundation of American music. Hugh Foley, one of our Oklahoma musicologists showed me how this song marks the trail of influence. It is a kind of song line that follows the Trail of Tears.  Take a listen to the Rolling Stones, “The Last Time” and you’ll here one direction the trail led. We were there at the birth of American music.

This morning I head out into the day. This could be the last time, we never know. So let’s act with the kind of awareness and treat everyone with kindness."

http://latimesblogs.latimes.com/lanow/2012/04/medical-marijuana-raids.html
I thought Obama was going to lighten up on this? I guess not... and we in CA are severely disappointed...!
It's just a plant! Legalize it!!!

----------------------------------------
THE GREEN RUSH
'Master growers' cultivating a higher grade of marijuana
A new breed of connoisseur is producing pot that is potent, tastes smooth and has a pleasing aroma — the kind of product now expected by ever-more discriminating consumers who frequent medical cannabis dispensaries. 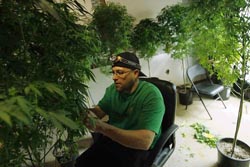 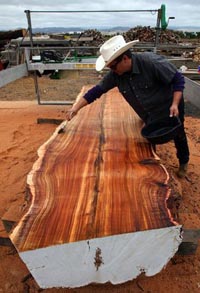 "That acacia's beautiful," said John Dominguez, the director of a 2-month-old partnership between Anaheim-based West Coast Arborists and Woodhill Firewood in Irvine, adding that the old-growth grain is something that "you'll never see" on the market today.

"A person going by the name Matthew Brown posted the message, "Nice, one down and a BUNCH to go!" in response to a Facebook image of a single wolf choked to death in a snare."

http://news.yahoo.com/dead-wolf-photos-stir-tensions-west-005357205.html
Wolves are just trying to survive - our 'war' against them is... stupid. And if coyotes have taken up residence in Golden Gate Park?.... we ain't never gonna get rid of either.

Dear Susan - i am not bored yet. 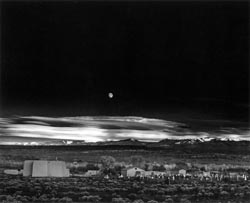 http://www.wired.com/rawfile/2012/03/10-photographers-you-should-ignore
One comment:
The article isn't saying Eggleston should be written off or that Shore is boring. What is is saying is that photographers shouldn't try to copy them slavishly.
With this in mind the tongue in cheek implication is that we're better off forgetting about them whilst trying to develop our own style.

Beneath the American Dream and white picket fence clichés lies a nomadic culture of modern travelers, criss-crossing the plains, mountain ranges and deserts of the US. In a forthcoming documentary for the BBC, British writer Richard Grant takes to the roads to discover the tribes of neo-nomads in the deserts of America’s south-west – hitch-hikers, kids, preachers, rodeo riders and retirees – and expose the revolution of travelers from the earliest Spanish conquerors to the American Indians and cowboys. 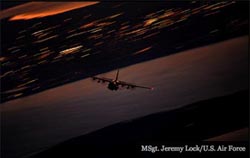 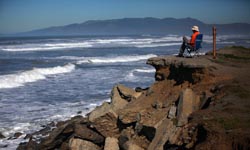 With the surprising acceleration of sea level rise due to the melting of both the Greenland and Antarctic ice sheets over the past decade, the San Francisco canal system was officially abandoned this week. Additional ferry service has been announced between the new major islands of the San Franciscan Archipelago while the boring machines make progress under the Van Ness Passage and Richmond Pass for new transit tunnels. 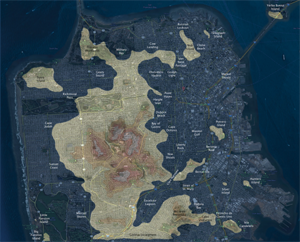 You gotta like a site that has this tagline/motto "You can pry my burrito out of my cold, dead hand"

The Sound of Solitude

We are all cocooned in noise, and can escape from one another's only when immersed in our own. What effect is the sound-culture having on our self-awareness and faculties of thought?

http://www.theatlantic.com/health/archive/2012/03/the-sound-of-solitude/254480
(This is why i like the desert - the peace, solitude, and absolute quiet... is overwhelming.)


Are you ready for some...?  no, not football, how about photomontage? 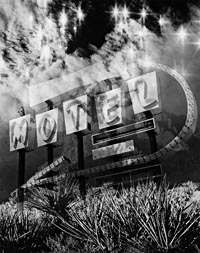 Motel sign?...somewhere along the Salton Sea.
Landscape?...Nevada.
Starry sky?...a sandwich - some clouds, and some 'stars' created by poking some holes in black paper, putting a light behind it, and shooting that thru a star cross filter.
The motel? Not open, not for a long time, though it's not obvious from just this sign alone.

(Have you noticed this is a parody of a credit card company ad? - i hope so.)

I really like the signage that many places have created over the years - it's garish, it screams at you, and that's the point. But many of these things have been left to decay over the years.
Here's one that now points to... nothing. 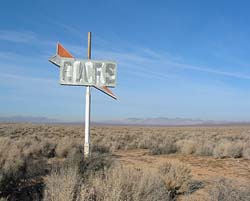 If you missed a previous post, there was a good link to motel architecture:

http://todayspictures.slate.com/20111212/
("In 1925, America’s first motel, the Motel Inn, opened in San Luis Obispo, Calif. Today we look at the ubiquitous motel architecture, from Niagara Falls to Las Vegas to the Gold Coast of Australia.")

One experience i like having is driving thru the desert after sunset....

..... to one's final destination, many miles away, and seeing a desert town from far, far away, as just a twinkling of lights. Beyond the light they cast is a vast space which you will pass thru quickly. The feeling of that distance, and the contrast to the anticipated warmth of the town lights is kinda like our human existence - here we are on this small planet which just happens to be the right distance from the sun, and just happens to have an atmosphere the supports life - our atmosphere is 21% oxygen - at 15% nothing would burn, at 24% everything would burn.
It's the cosmic equivalent of walking on a knife's edge.

So this 'motel' sign appears, planted in a harsh desert space, beckoning.
This image is simply about that feeling - seeing the way to a hospitable place in the middle of nowhere.

I've used this motel sign once before, many years ago: 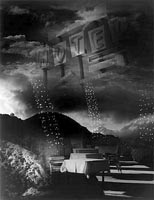 But there's quite a difference between how the old image came about vs. the new one, which leads to a discussion about how one's work evolves over time.

I'll describe my changes on one condition, along the lines of "I'll show you mine if you show me yours" ...that is to say, do some similar introspection on your own work! - no, you don't have to show me anything! (You might also find some of this instructive if you are trying to do similar montage work.)

I moved to CA in '92, started collecting a whole new batch of negs, didn't want to use anything 'east coast', where i moved from, it just didn't fit in at all. So the pile of proof sheets i had to work with was not very deep...
Most of the time I'd start a print, do a few exposures, and then get kinda 'stuck' - as in 'what do i do now?'...
and i would find myself searching for something.. sometimes 'anything'... that finished an image off.
Which is why so many of them end being 'surreal'.

My favorite printing paper (Ilford RC matte) no longer exists. 'RC' was the important part. Loved that paper, it was good for hand-coloring, and..it dries in no time flat! I could do a test exposure of one element in the montage, dry it out in a minute, and tape it down in register (put the test scrap on the easel, turn on the exposure, move it around til it matches up, then tape it down/in place).
This was very VERY useful when doing assignment illustrations, ...and also many 'art' prints.... I could really see how the image was shaping up. If you haven't already clicked the link to 'darkroom' in the column to the right, check these pages out:

Initially, as the pile of proof sheets became deeper, searching for complimentary negs got a bit easier. When the pile got even deeper, it was just toooo deep... i got lost!

I started to rely more and more on my 'inner eye', & gut instinct.
I definitely got much more 'gut instinct' in taking the negatives - and i started dreaming about images - i would sift thru my pile of sketches last thing before I went to sleep, and every once in a while, I'd wake up w/ a new image connection in my head. And that's how this one came about.
I went to Nevada in late 2008, shot many rocky severe landscapes, remembered the motel sign and put them in 'the crock pot of dreams', so to speak.

I've also started a new development process: I make scans or fast and dirty dig. pix of the contacts, take them into photoshop, make a sketch, of sorts, print that out.... and put it into the aforementioned 'crock pot of dreams'...and let my subconcious (sic?) mind run with that.

Darkroom-technically-wise, it's once again pretty straightforward, landscape at the bottom, motel sign in the middle, and a sky sandwiched w/ one of my 'star-scape' negs at the top.

This one is also an interesting challenge for handcoloring, I could play it (at least) two ways, I could make the sign appear to be lit by coloring all of the little lightbulbs in the arrow as 'on'.
I could also leave all the lights off, and add color to the 'stars' in the cloudy sky.
More on that in a future post.....

For larger images of all the above:

(Also included, some previous prints with an 'abandoned motel' theme.)
Posted by CaliforniaSilverwizard at 4:17 PM No comments: