The more you improvise, the better it gets. Do that!

If i have any advice to pass on to anyone, this would be it = "improvise! fly by the 'seat of yer pants', make it up as you go along!
Do not fall prey to the digital/photoshop creed of tweaking everything to death, and controlling everything all the time."

This is a road to near insanity, don't go there.
Have you ever watched a dog chase it's tail? It's kinda like that.

Many years ago, i wrote this thing called an 'artist's statement', it still rings true:

Yep, that's it. Nothing more needs to be said. RR has wrapped it up, entirely.

I've made a habit of pulling out all the negs i want to use in an image before i even start to print. A few years ago i started on a print... then discovered that a neg was not where it should have been, and tracking it down amongst hundreds of rolls was next to impossible.

When i pulled out all the negs for this one, i wasn't happy w/ the way it was shaping up, here's the P'shop sketch:

The campfire flames at the bottom right: 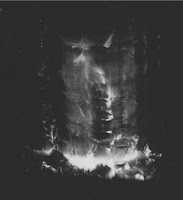 didn't extend very far to the left, making an even 'bottom' a bit trickier than i had anticipated. The window in the abandoned building had too many stray hi-lites from holes in the roof... and the sky was weak, not enough contrast.
It just wasn't working the way i wanted, i had this gut feeling that i needed to come up w/ something else.

So 'plan B' (the image was telling me what it wanted to be) became... make the image vertical - the campfire neg will fill the bottom, drop the window, and just concentrate on the bird emerging from the fire (hence the title 'phoenix').
Much more focused.

It took some effort to get the somewhat blurry image of the bird (it was a crow).

A few years ago, i topped off a desert trip by spending a few days at Pt Reyes, Drake's beach in particular. I was walking along, until i saw something happening that had potential, the way the waves came in and receded. I parked myself, started to eat my sandwich. Then i saw what i thought made some good shots, put the sandwich in my bag, loosely wrapped. It only took 30+ seconds to make the shots, and when i looked back?... the sandwich wrapper was being blown down the beach, the sandwich - GONE! and some gulls flying off w/ food ( MY Food!) in their beaks.

I learned my lesson. Next day, i ate my sandwich sitting in the car, but that attracted attention too. In no time flat i had a gull parked on the hood of the car. And there were crows waiting in the parking lot just a few feet away. Never one to miss a photo opp., i tempted the crows to land on a fence post a few feet from the car with the last of the bread of my sandwich.
It was tricky! I had to put the bread crumbs down on the stump, step back a few feet ( enough for them to approach and snatch) and get off a shot, VERY quickly. I was using a 55mm lense on my Pentax 6x7, wide enough to get it all in. I only got one frame that was worth a damn, it was this one.

Don't call anyone a 'bird-brain' and think it's an insult - it's not.

So the negs on this one are:

The campfire, which has the stuttering effect because i moved the camera vertically during the exposure.

I sandwiched the crow neg w/ a few 'stars', and left the exposure a bit light, so you can see a few details, however blurry, of the bird.

I burned in a few distant birds, that the crow will join soon... then finally i blew in some sky.
3 prints on this one, each one w/more sky, burned in better. All = 'keepers'! 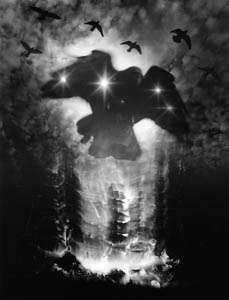 A couple of larger images, & the P'shop sketch:

Wing it, take a chance, go out on a long branch!
Posted by CaliforniaSilverwizard at 9:24 AM No comments: