First, From the 'whatever catches my eye' file:

I know we all hear all kinds of negative things about the US Military, it's pretty easy to throw that stone.
They don't always do things right.
(Is anyone reading this perfect?? Helloooo!!! I highly doubt it.)
BUT!... they are capable of great good, when they put their minds to it, and I think they are definitely trying as best they can.
The circumstances they have to work with? ..would leave about all of us reading this as definitely helpless and useless.

'Stung by a venomous snake in a primitive and isolated corner of a war, helped by a persistent father and a chain of people who heard him, Sadiq had reversed Afghanistan’s cruelest math.'
If this is what my tax dollars contribute to??? I contribute, MOST happily!!

"..I never had the opportunity to say goodbye to General McChrystal. I hope he will return when there is peace in Afghanistan, because he will be the father of that peace."
If you haven't read the profile in Rolling Stone magazine, you should

Guards Of The Revolution - Iran
http://www.youtube.com/watch?v=ZL-GdeJef8A&playnext_from=TL&videos=cl0vcbXUEJ0
16 minutes - check it out.
If you have any interest in what is going on there, CHECK IT OUT!

Report: Toxins found in whales bode ill for humans
http://news.yahoo.com/s/ap/20100624/ap_on_sc/whaling
By ARTHUR MAX, Associated Press Writer - 6/24/2010
AGADIR, Morocco – Sperm whales feeding even in the most remote reaches of Earth's oceans have built up stunningly high levels of toxic and heavy metals, according to American scientists who say the findings spell danger not only for marine life but for the millions of humans who depend on seafood. 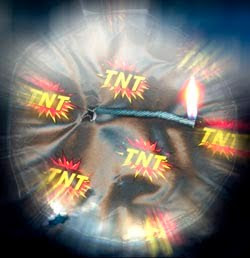 I haven't touched on any digital images in a while, have I?
Well, with July 4th drawing near, I remembered an image I did a few years ago for a friend who was having his 60th Birthday, and I made him an explosive card for the event.
(The image was 'explosive', not the card.)
It started w/ a big firecracker my boss gave me - Why? I don't know. In late May, the California fire season starts, and setting of fireworks is pretty much a big no-no. By July 4, it's an even bigger NO-NO!
I could however scan the sucker, for later use.
The scan, I can use. The firecracker? Probably not, ever.
So I came up with this image.
You can download a small Photoshop file to see how it works,
and you can download a larger image file, if you'd like to do anything with it, help yourself.
It's at:


A while ago, I promised a second scanograph... which died along w/ several hard drives a few months back.
I ended up finding it on a back-up disc, so here it is.
I can't offer a layered Photoshop file, only a 'before'(the scanograph) and the end product/image.

This one is made much like the previous one - a scan of a bunch of stuff...
I then added to it, w/ digital images.
No big secrets, other than working at it, and adding more things to the image, a layer at a time.
In the darkroom, it's 'shit or go blind' time, the developer only lasts so long, I've got a few hours or so from the time I start a print until I have to finish it. And once I've made exposures on the paper, there's no 'command undo'. Working without a net, so to speak, like live performance musical improvisation.
Digital is the exact opposite, you can hold anything in suspension indefinitely.
The basic scanograph is years old, probably done a rainy/foggy Saturday or Sunday.
Didn't know what to do with it, or the other 4 or 5 scans I did that day.
Then there was another 'rainy/foggy Saturday or Sunday'... and I returned to the image.
I constantly collect sky images, both on film and digital... I added the skies (actually one sky, copied and stretched in several ways) on layers above the scanograph, and erased carefully to reveal what was below. At that point, I didn't know what else to do, and so hit command+save, and parked it.
Months later, I took a day trip to Marin Headlands, and shot many frames of waves crashing on the beach, it was a particularly 'high surf' day, which took many captures of, so I added one of those frames to the bottom.
As usual, a page at my website:

Next time round?... probably some darkroom, maybe with some hand-coloring, too.
Posted by CaliforniaSilverwizard at 5:54 PM No comments: